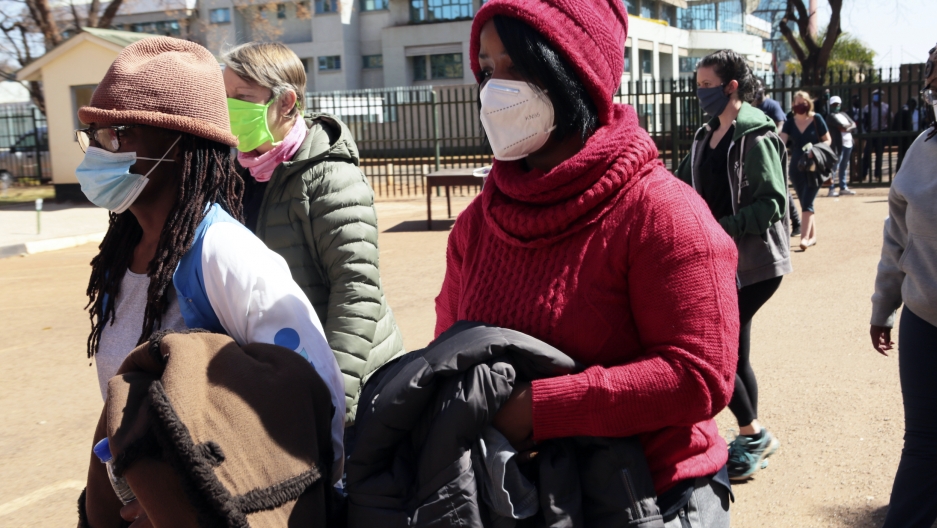 Zimbabwe is facing a new terrorist threat, according to its president, Emmerson Mnangagwa. He argues the menace is actually Zimbabwe’s main opposition party.

Last Friday, massive demonstrations were planned to protest Mnangagwa’s handling of the coronavirus outbreak and the country’s collapsing economy.

Anticipating those protests, authorities locked down major cities. Scores of activists and demonstrators were arrested and detained, according to Zimbabwe Lawyers for Human Rights. One of those arrested was author and filmmaker Tsitsi Dangarembga.

Just days before her detention, Dangarembga’s latest novel, “This Mournable Body,” had made it onto the Booker Prize for Fiction longlist. She has since been released and joined The World’s host Marco Werman from Harare.

Marco Werman: First of all, Tsitsi, after this experience, how are you doing? And are you currently facing charges?

Tsitsi Dangarembga: I’m doing well, thank you, having gone through that. Yes, I am currently facing charges. They charged me with attending a meeting with intention to incite public violence, breach of the peace and acts of bigotry. I was released on bail, conditional bail, and I have to report once a week, and the hearing will be in September.

Was it your understanding that violence would be taking place?

Oh, absolutely not. I had been campaigning on Facebook for people who were attending to make sure that they were peaceful and had pointed out that there was absolutely nothing to be gained from violence. I had even asked people to have positive messaging, rather than potentially divisive messaging, like “ZANU-PF must go.” I had advocated for us to envision what we wanted: a better Zimbabwe and things like that.

ZANU-PF being the ruling party. So if you could, Tsitsi, take us back to Friday. What was the protest like?

Well, the protest really suffered from the clampdown. Two days before the demonstration, it had been declared illegal and the military had been deployed in strength. And so people were really intimidated and did not want to come out. So I just felt that since I had been engaging with the whole notion of the demonstration on social media, that I should have the courage of my convictions. And a friend said that she would demonstrate with me, so we went out. I was surprised to see no people. We had expected to find more. But there weren’t any. There were other people demonstrating in very small groups in other places. But in my particular suburb, we were the only two that we saw.

So your arrest was just days after it was announced that your book, “This Mournable Body,” was longlisted for the Booker Prize. Loosely, it’s a portrait of a young woman whose hopes for life are constantly shut down by forces beyond her control. This week must have felt really surreal.

It was, absolutely, because my husband says he can remember me screaming on the Monday when I received the news of the Booker longlisting. And then Friday I was texting him frantically saying I’d been arrested. And so it was really two extremes in a very short space of time.

So in your book, “This Mournable Body,” you actually return to a character from your first novel, “Nervous Conditions.” The character is Tambu, and it follows Tambu, who was once young and hopeful but is now disillusioned. And all of this takes place in Harare. Would you say there’s some parallel between Tambu’s story and what’s happening now in Zimbabwe?

Absolutely. I wrote “Nervous Conditions” just after independence in the 1980s, and there was this sense of hope. And I wrote it to accompany young women who were living out this hope. And then, of course, things changed. And so it wouldn’t have made much sense for me to pretend that hope still existed in the same way. And so the changes in the country’s circumstances needed to be reflected in the lives of the characters. And so that’s what I did in “This Mournable Body.”

Last Friday’s protests were not the giant demonstrations that were expected because of that government crackdown. But in the days since, I understand Zimbabweans have taken to social media, posting under the hashtag #ZimbabweanLivesMatter. What is your take on these protests, Tsitsi? Is there a lot of momentum here?

What I like about #ZimbabweanLivesMatter is that it’s a positive message. It’s not aggressive. It’s not confrontational, and it’s unifying. And so I am really happy to see that we have a hashtag now that embraces all Zimbabweans. And I think that is how we need to be going forward.

I got to say, this all feels like a rerun of the worst days of the decades-long regime of the founder of ZANU-PF, Robert Mugabe, with Emmerson Mnangagwa in the same role. Realistically, what does the future look like for Zimbabwe?

Realistically, the future for Zimbabwe looks troubled for the foreseeable future. What does give me hope is that I have a sense that Zimbabweans are willing to take some risks — not huge risks, because we know how repressive reactions from the government can be. But I do feel that Zimbabweans are becoming bolder at talking about the issues and the repression. And that’s wonderful. And of course, social media is very helpful there. And so I think that if we can just continue on the trajectory that we are [on] now, we can stave off the worst.