The Help Fight Corona committee in Gwanda illustrates the extent local communities must go to ensure basic resources amid a crippled national health care system. Citizens operate a raffle to raise money for medical supplies and Zimbabweans have stepped up with donations of livestock, food, gasoline — even designer handbags. 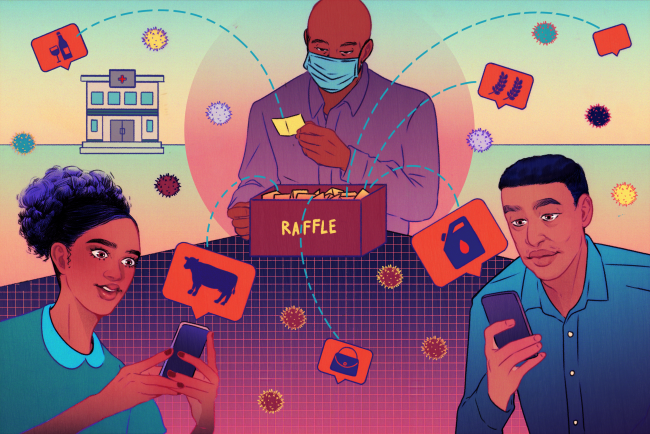 The Help Fight Corona committee in Gwanda illustrates the extent local communities must go to ensure basic resources amid a crippled national health care system. Citizens operate a raffle to raise money for medical supplies and Zimbabweans have stepped up with donations of livestock, food, gasoline — even designer handbags.

GWANDA, ZIMBABWE — Once every couple of weeks, members of the Help Fight Corona committee, a community group in the small mining town of Gwanda, meet to draw names from a cardboard box.

Only three of the committee’s six members assemble to pick a name, and no potential winners are present — a necessity of social distancing in the time of the coronavirus. They broadcast via social media.

The prize is donated livestock, a highly valued commodity among traditional families in this southern region, and a boon for the raffle’s organizers. They use the funds raised to purchase supplies this town may need to combat the coronavirus.

Actions like these illustrate the extent local communities must go to ensure necessary resources in Zimbabwe, which faces the virus with an overburdened health care system that struggles to provide citizens with basic services. Smaller towns like Gwanda are trying to fill the gaps.

Help Fight Corona has raised about $2,500, largely for medical supplies. The money is a significant sum where formal employment is scarce and many families get by on less than $100 a month, says organizer Walter Mutero.

“When we began this, we did not think it would get this big,” he says.

Economic and political challenges over the past two decades have crippled Zimbabwe’s health system. Major public hospitals lack supplies such as thermometers and painkillers. Nurses and doctors are fleeing for more lucrative opportunities abroad.

Neighboring South Africa, with a border crossing only 197 kilometers (about 122 miles) away, has more than 618,000 confirmed cases of COVID-19 and more than 13,600 deaths — the continent’s highest.

Zimbabwe’s border with South Africa is officially closed with only Zimbabweans, permanent residents and cargo allowed through. Zimbabwe does not report cases by town, but Mutero and other Gwanda residents don’t want to take any chances. By the time the virus started spreading in Zimbabwe in late March, Mutero had already started Help Fight Corona via WhatsApp, a messaging app, and soon began fundraising raffles.

Matabeleland South, the province where Gwanda is located, has reported 638 cases and four deaths. The majority of cases are Zimbabwean returnees from South Africa and Botswana, says provincial medical director Rudo Chikodzero.

The government set up two isolation centers at Gwanda’s provincial hospital and at a local clinic. Mutero and Help Fight Corona have bought gloves and masks for the clinics as well as building materials. Some committee members volunteered to help repair the isolation centers, which were in need of renovations.

“We know our government is broke and our health systems need our help,” says Alderman George Chipengo, who donated a goat for a raffle that raised 5,500 Zimbabwean dollars (ZWL), valued at around $220 at the time. “We cannot wait for Harare to help us when we know the resources are unavailable,” he says, in reference to Zimbabwe’s capital.

Livestock are the most commonly donated prizes, but Zimbabweans also have contributed alcohol, food staples, cans of gasoline and even designer handbags. Members of Zimbabwe’s large diaspora, people who fled the country’s decades of economic crises to live and work abroad, also are donating to Help Fight Corona.

Sheron Dehwa, the treasurer of the initiative, says the group wants to buy blankets next given the winter weather in Zimbabwe.

We know our government is broke and our health systems need our help. We cannot wait for Harare to help us when we know the resources are unavailable.Alderman George Chipengo, who donated a goat for a raffle

Dr. Norman Matara, secretary general of the Zimbabwe Association of Doctors for Human Rights, a philanthropic organization, supports the community’s effort. But he doesn’t want outside funding to replace the responsibilities of government.

Officials argue they’re doing all they can to battle a global epidemic. Dr. Gibson Mhlanga, the acting secretary for the Ministry of Health and Child Care at the time of the interview, says the government is distributing assistance and ensuring its supplies are used appropriately by restricting them to environments most at risk.

“We don’t have the volumes we need, and everything we get we are distributing in an equitable manner,” he says.

Local communities have always worked with public hospitals to provide assistance, even before the coronavirus threat, Mhlanga says. “We don’t compel the community to do this, but we allow them to organize themselves and assist where they see a need.”

As cases rise worldwide, Help Fight Corona will continue to prepare the town, Mutero says. “We are a small community doing the little we can in the best possible way to win this fight.”

Vimbai Chinembiri, GPJ, translated some interviews from Ndebele and Shona.