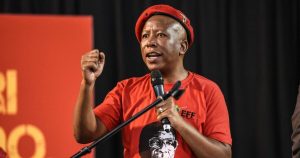 Economic Freedom Fighters leader Malema spoke at a Women’s Day event close to the grave of anti-apartheid icon Winnie Mandela, charging that Zimbabwean women wake up every day with a threat of arrest, abduction or rape by Mnangagwa’s shock troops.

Zimbabweans must now engage in the “real revolution”, he said, while calling on South African President Cyril Ramaphosa to turn the screws on Mnangagwa.

“They abduct children from the streets, particularly girl children, rape them in the bush. Police and soldiers have become a law onto themselves. Mnangagwa has become a pig and is eating his own children in Zimbabwe.”

Malema said when Mnangagwa swept to power on the back of a military coup in November 2017, “a lot of us had thought something positive will happen” but “things have become extremely worse.”

Malema said impunity under Mnangagwa had allowed the abuse of Zimbabweans by security services to go unpunished. In January 2019, following riots over fuel price increases, rights groups documented over a dozen rapes by soldiers who were going door-to-door smoking out Mnangagwa critics.

Zimbabweans supported South Africa during the struggle against apartheid, the EFF leader said, and now it was time for South Africa to return the favour. He placed specific pressure on Ramaphosa – the current African Union chairman – to intervene and rein in Mnangagwa.

Ramaphosa last week announced he was sending two envoys to Zimbabwe after the military and police were used to crush planned anti-government protests on July 31.

South Africa’s main opposition Democratic Alliance has however raised questions about the composition of the delegation made up of the former Speaker of Parliament Baleka Mbete and one-time security minister Sydney Mufamadi.

The DA said the pair should be withdrawn “because of their political bias towards the Zanu PF-led regime in Zimbabwe.”

“Failure to withdraw these two individuals will render the mission a farce and an attempt by President Ramaphosa to cover up the human rights abuses that Emmerson Mnangagwa’s government has been committing against defenceless Zimbabweans,” the DA said in a statement.

While attending Zanu PF’s extraordinary congress in December 2017, Mbete, who was representing the ANC, heaped praise on Zanu PF for the military coup that removed Mugabe.

Mufamadi refused to meet with opposition leaders in Zimbabwe in 2007 when he was sent by then-president Thabo Mbeki in response to the country’s escalating political crisis, choosing instead to focus his attention on then-president Mugabe.

Both Mbeki and Mufamadi insisted that the opposition leaders recognise Mugabe as the legitimate leader of Zimbabwe before political talks could begin.