The involvement of Zanu PF elements in the July 31 protests is now beyond dispute. Former Zanu PF youth commissar Godfrey Tsenengamu told the Daily News that he was working with Zanu PF insiders to ensure the day was a success. 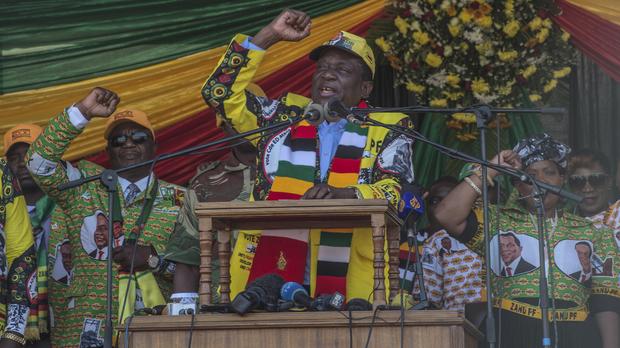 Emmerson Mnangagwa and his Zanu-PF party’s reign over Zimbabwe stretches back to when Robert Mugabe led the country to independence from Britain. Picture: AP Photo

It was not be. Mnangagwa clamped down violently, arresting journalists and activists and flooding the streets with soldiers ready to shoot at slightest provocation.

One does not have to rely on Tsenengamu’s remarks to the Daily News, he could very well have made them to sow confusion in the opposition camp. Mnangagwa himself is making that claim albeit privately. As reported by online tabloid ZimLive, the last Zanu PF politburo featured explosive accusations against vice president Constantino Chiwenga’s supporters who were accused of working with the protestors.

Going back to the January 2019 protests, Zanu PF MP Justice Wadyajena and former deputy minister of Finance Terrence Mukupe also claimed that there were forces within Zanu PF that were fueling the protests.

A helpful question is why Zanu PF elements would seek to align themselves with the opposition? It would not be the first time. Information now in the public domain suggests that a significant amount of the pro-democracy activism leading up to the November 2017 coup was sponsored by the Lacoste faction.

The final November 2017 protest was engineered by the military; the activists involved have admitted as much in public. Meanwhile, the MDC was misled into believing there would the Government of National Unity (GNU) if it supported Mugabe’s overthrow. Instead of exploiting that historic opportunity to extract meaningful reforms, they were played and got nothing.

The absorption of ZAPU in 1987 and the 2009 GNU are instructive: Zanu PF never extends sincere hands of friendship.

In this current episode of Zimbabwe’s never-ending political drama, it is not difficult to see why Mnangagwa’s enemies within Zanu PF would seek to exploit the opposition toward their own ends. A second coup is unlikely, Mnangagwa has moved his people into key security positions. Those attempting to remove him by violent means would not be in a position of uncontested military power as in 2017, but in the precarious position of rebels. They would likely be crushed. His opponents are well aware of this and are unlikely to draw themselves into a zero-sum game in which failure will cost them their lives.

This leaves resignation and impeachment as the only viable means of removal. Both avenues require a background of expressed popular discontent, which is already brewing even without the help of Mnangagwa’s Zanu PF opponents.

Yet this is where the danger arises. The call for Mnangagwa to go is extremely convenient for his Zanu PF opponents because the constitution is clear that he will be replaced by Zanu PF. Even if the opposition is promised a National Transitional Authority or a Government of National Unity, this would be on Zanu PF’s terms.

Imagine the rule of law was established in Zimbabwe and the police were free to arrest without fear or political favour. Joram Gumbo, who was released by the Zimbabwe Anti-Corruption Commission under unclear circumstances, would be in handcuffs as would many others.

Why would Zanu PF turkey’s vote for this kind of miserable Christmas?

The rule of law, justice and any other virtue present an existential threat to Zanu PF and the pro-democracy movement must not allow itself to be drawn into Zanu PF factional fights. Their aspirations are at violent odds.

If there is to be any protest against Mnangagwa, it must not be to topple him, which would lead to his replacement by another Zanu PF despot, but to force reforms chief among them electoral. The current approach of demanding Mnangagwa’s removal without a clearly defined endgame only plays into the hands of a Zanu PF faction which is all too eager to replace him.

The alternative is revolution, which would be a complete overthrow of the constitutional order and Zanu PF. That appears unlikely in the short term.