When Nelson Mandela made his last official visit to London the Vigil threatened to campaign against his refusal to speak out against Mugabe. We were gratified when he then spoke of problems of governance in Zimbabwe and were able to join in the warm welcome for the hugely popular South African liberation hero. 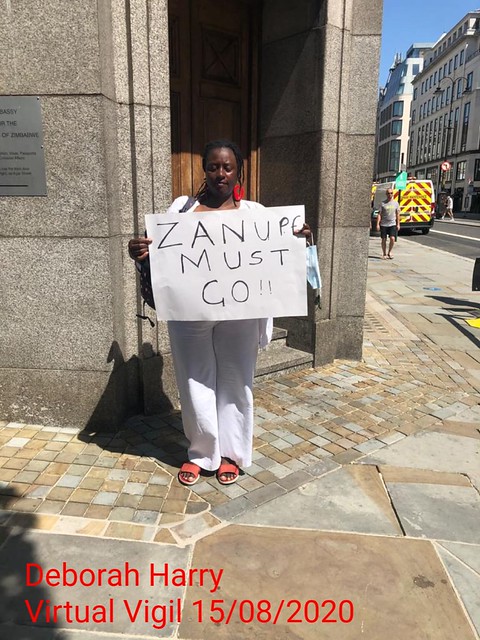 But ties between his ANC and Mugabe’s Zanu PF remained strong and only now, with his favoured successor Cyril Ramaphosa at last coming to power, are there real signs of a fracture between the two liberation movements, spurred by the influential Economic Freedom fighter leader Julius Malema, a supporter of Mugabe, who has turned against President Mnangagwa.

Ramaphosa on Monday sent special envoys to Harare. They had a meeting with Mnangagwa but returned home on Tuesday, cancelling a planned meeting with the MDC, leading to speculation that there had been no progress.

Darren Bergman, the opposition Democratic Alliance’s Shadow Minister of International Development and Co-operation, said the Zimbabwean government had denied the envoys an opportunity to meet relevant stakeholders and get a balanced picture of the situation. Mnangagwa had told the envoys that there was no crisis in Zimbabwe and hence no need to meet the opposition or civil society.

Bergman said: ‘Mr Mnangagwa’s government has unleashed a reign of terror on defenceless citizens, arresting journalists and activists on trumped-up charges. For him to claim that there is no crisis in Zimbabwe and ask the envoys sent by the AU Chair Ramaphosa to turn around and go back without meeting the opposition is a poor attempt at covering up the actions of his murderous regime.’

He said Ramaphosa will have to choose whether to stand with the people of Zimbabwe against the tyranny of Zanu PF or continue with the policy of ‘quiet diplomacy’. (See: https://www.marketwatch.com/press-release/zimbabwean-tea-summit-a-total-failure-ramaphosa-himself-must-go-press-release-2020-08-11?mod=mw_more_headlines&tesla=y).

Meanwhile the Chair of the ANC’s International Relations Committee, Lindiwe Zulu, said it was time to be frank about the unrest in Zimbabwe. ‘in the ANC’s view, yes there is a political crisis in Zimbabwe’, she said. (See: https://www.enca.com/news/zulu-there-political-crisis-zimbabwe.)

The AU has also expressed concern at what it described as the disproportionate use of force by the security forces, urging restraint in the government’s response to peaceful process and calling on Zanu PF to uphold the rule of law. (See: https://www.newzimbabwe.com/au-speaks-on-zimbabwe-crisis-orders-mnangagwa-to-respect-rule-of-law/.)

Former Botswana President Ian Khama criticised SADC and the AU for failing to deal with the Zimbabwe crisis and said they should prioritise the plight of the Zimbabwe people. He said: ‘People fought for freedom not to replace one oppressor by another’. (See: https://www.newzimbabwe.com/ian-khama-slams-toothless-sadc-au-over-zim-crisis/).