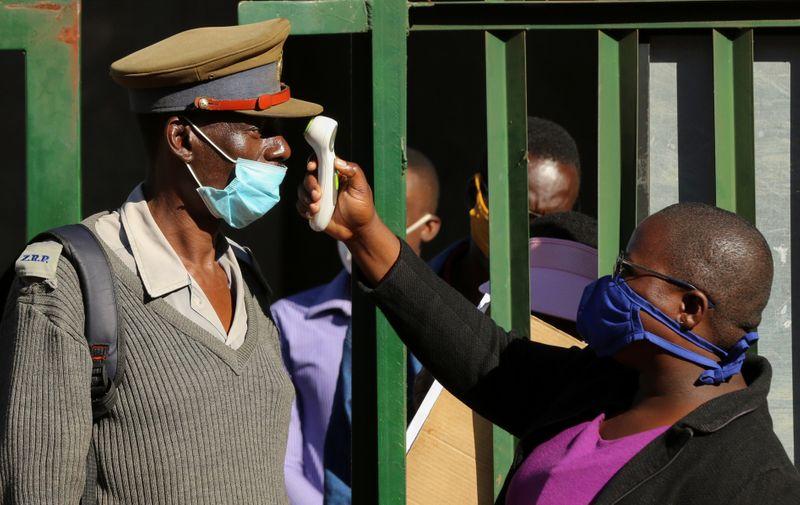 A person checks a policeman’s temperature during a nationwide lockdown to help curb the spread of the coronavirus disease (COVID-19) in Harare, Zimbabwe, May 14, 2020. REUTERS/Philimon Bulawayo

Monday 3 August 2020 marked day 125 of the national lockdown declared by President Emmerson Mnangagwa and has been in place since 30 March 2020.   The Ministry of Health and Child Care reported an increase in the number of confirmed cases to four thousand and seventy-five (4 075) The number of cumulative tests done stood at one hundred and thirty-seven thousand eight hundred and eight (137 808). The number of recoveries increased to two thousand nine hundred and thirty-eight (2 938) and the death toll increased to eighty (80).2.0       Methodology
Information contained in this report is derived from the following Forum Members:

3.0       Highlights
President Emmerson Mnangagwa has appointed Air Commodore Jasper Chimedza as Permanent Secretary in the Ministry of Health and Child Care.  He takes over from former substantive permanent secretary Dr Agness Mahomva who was appointed Chief Coordinator of the National Response to the Covid-19 pandemic in May this year.  Air Commodore Chimedza is a medical doctor who studied medicine and surgery at the University of Zimbabwe before being attested into the Air Force of Zimbabwe.The appointment of Dr Chimedza comes as striking doctors have vowed to press on with their job boycott despite pleas by President Emmerson Mnangagwa for them to return to work amid revelations that scores of people could be dying in their homes due to lack of medical care. President Mnangagwa pleaded with senior doctors to abandon the strike that began last week during an address at the burial of Agriculture minister Perrance Shiri at the heroes Acre on 31 July. The doctors joined nurses and other health workers, who have been on strike for over a month, as they demanded salaries in foreign currency and provision of personal protective equipment (PPE) to deal with COVID-19 cases.

The strike by the doctors has crippled the health delivery system during a time when the local COVID-19 transmissions have risen in the country, constituting more than 70 per cent of all cases. Bulawayo and Harare remain the worst affected provinces, followed by Matabeleland South and the Midlands provinces. More than 1 200 people have now been infected by COVID-19 in Harare, the new Zimbabwean epicentre, after the dramatic jump in confirmed infections this weekend. Zimbabwe now has 3 921 confirmed cases after its worst two days on record.

There are fears that the number of infected cases will increase as a result of the continued use of illegal entry points along the Limpopo River to access medical treatment and cheap basic commodities and drugs from South Africa by desperate Zimbabweans.  Most Zimbabweans who survived on cross border trading suffered a serious setback following the closure of borders in March, forcing many to illegally cross the borders to restock. Beitbridge East legislator Albert Nguluvhe (ZANU-PF) on Wednesday said most border jumpers were not Beitbridge residents, but came from as far as Chiredzi, Masvingo, Tsholotsho and other places to access cheap food and medication. He said the border jumpers were putting the nation at risk of contracting COVID-19.

Community leaders in Matobo have reacted to the influx of border jumpers from South Africa and Botswana in their areas by banning pregnant women and the elderly from attending funerals while consumption of food at such events is also no longer permitted as part of strategies adopted to prevent the spread of COVID-19 in the area. The elderly and pregnant women, as well as people with underlying ailments, are more vulnerable to the deadly pandemic.

The Mashonaland Central Minister of State for Provincial Affairs who is also the chairperson of the Provincial COVID-19 Taskforce Honourable Monicah Mavhunga directed that all Taskforce meetings will now be virtual. This is in line with the Public Service Commission’s circular discouraging face to face meetings.

Midlands State University (MSU) has, due to the surge in COVID-19 cases in the country, suspended final year examinations that were set to start on 3 August. On July 24, Government gave a directive to all tertiary institutions to close and continue conducting lessons through e-learning as part of measures to curb the spread of COVID-19. The Ministry of Higher and Tertiary Education permanent secretary Professor Fanuel Tagwira cited the surge in COVID-19 cases in the country as the main reason for the directive. This development has affected MSU final semester students in the faculties of Science and Technology, Law, Education and Natural Resources Management and Agriculture.

Essential service workers nationally using ZUPCO buses to report to work have expressed concern over delays at police checkpoints, where some of them have even been allegedly assaulted by soldiers despite producing valid clearance letters. The government last week tightened lockdown regulations following a spike in COVID-19 cases in the country, with police demanding exemption letters from those entering city centres. The essential service workers, most of them in the health sector, said they were being frustrated by police and soldiers at roadblocks. They said each route to the city centre had two to three roadblocks where passengers are made to disembark from the bus and be checked.

The Bulawayo City Health Department has instituted an investigation after claims that dozens of people who attended a lavish and wild birthday party thrown by a city socialite and businessman last month contracted COVID-19. Two people who reportedly attended the party have since died, the second being a close associate of the party organiser who died on Friday, reportedly from COVID-19 complications. The party, which was held on 4 July at a lodge in the affluent suburb of Burnside, has become the talk of the town with some reports alleging that most people who graced the event had contracted COVID-19 disease.

According to the Acting Health and Child Care Minister Professor Amon Murwira, hospitals should neither turn away patients nor demand a COVID-19 certificate before admitting patients, particularly in emergency cases. The exhortation comes after the country has gone through its worst month yet as 61 people succumbed to coronavirus in July alone. Infections rose by 2 564 cases during the same month, raising the spectre of more fatalities. The acting Minister said the Government was engaging hospitals to ensure they provided other life-saving services to avoid unnecessary loss of life.

6.0       Summary of violations
The table below summarises human rights violations documented by the Forum Secretariat and Forum Members from 30 March to 3 August 2020.

7.0 Conclusion
The Forum remains gravely concerned about the inadequacies of state of preparedness and response mechanisms that the government has put in place to curb infections of the COVID-19 pandemic.   After 125 days of national lockdown implemented to curb infections, the government’s interventions and strategies have either been non-existent, inadequate and/or ineffective. In light of the above, the Forum reiterates its calls to the government of Zimbabwe to put in place coordinated effective and meaningful strategies to respond and deal with the COVID-19 pandemic.