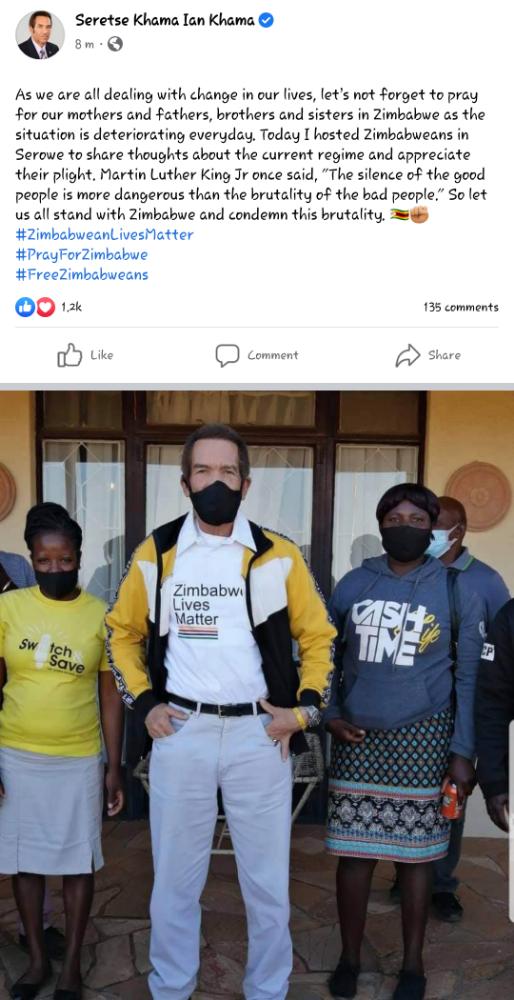 “Zimbabwe on the edge.” “Crisis in Zimbabwe.” “De facto state of emergency in Zimbabwe.” These are not my words but the banner headlines on South African television news channels this week.  After a fortnight of crisis which saw over 60 people arrested including journalists, internationally acclaimed author Tsitsi Dangarembga, Advocate Fadzayi Mahere, opposition and civil rights members, Zimbabwe was reeling in shock. We saw riot police jumping over the railing of a peaceful Harare coffee shop to arrest Advocate Mahere; the arrest of a woman carrying a placard saying “end hunger;” police hunting for a journalist and seizing his sister instead when they couldn’t find him. We heard the horrific account of the abduction and torture of a journalist’s 22 year old nephew: blindfolded, chained and taken to a place where he was forced to drink urine, beaten repeatedly over two days and finally dumped three kilometers from his home. His lawyer said: “I’m deeply concerned about the injuries suffered by my client, leading to acute renal failure. I understand his captors repeatedly stamped on him as he lay face down. He also has severe tissue damage around the buttocks and under his feet.”

After news of all these events became widely known locally and internationally, President Mnangagwa made a broadcast to the nation. He said there were people who were trying to “destabilize the country” and called them “Rogue Zimbabweans” and “Rotten Apples” who he said would be “flushed out.” In recent weeks critics have been called” terrorists,” and  “dark forces”  and the President said new measures  were to be brought out to criminalize “campaigning against one’s country.” After a post cabinet briefing a minister said “campaigning against one’s country shall be legislated at law and criminalized.” Legislation is to be presented in parliament which will “prohibit hate speech by public officials, media houses, and citizens in public spaces and social, print and electronic media platforms.” MDC Alliance Deputy President Tendai Biti said the new measures were coming in a “badly drafted Cyber Security and Data Protection Bill” which he described as “fascist dross intended to muzzle free speech and media.”

Our neighbours started to take notice. South Africa’s Department of International Relations said they “noted with concern the reports related to human rights violations in Zimbabwe” and later said they would send two ‘special envoys’ to the country. Former Liberian President Sirleaf, naming some of the people arrested said on Twitter: “Fadzayi, Tsitsi, Julie, Terrence, Loveridge, and all the others in Zimbabwe’s protest may God give you strength and courage in your pursuit of freedom.” Botswana’s former President, Ian Khama said on Twitter: “let’s not forget to pray for our mothers and fathers, brothers and sisters in Zimbabwe as the situation is deteriorating rapidly.” Sadly the AU, SADC and current African Presidents are yet to speak. The UN Secretary Genera has urged the government to ensure protection of all human rights, especially freedom of opinion and expression and the right of peaceful assembly and association.

In the days that have followed the crackdown of a mass protest that never even happened, we have kept our heads down and eyes averted. Soldiers with AK47’s strapped on their backs or sticks in their hands are still in our towns, at roadblocks, on the streets and even in supermarket car parks. Zimbabwe isn’t a military state but in the past fortnight Retired Air Chief Marshal Perrance Shiri who was also Zimbabwe’s Minister of Agriculture died. Last week President Mnangagwa appointed Air Commodore Jasper Chimedza as the new Health Permanent Secretary and this week appointed Zimbabwe’s Vice President, Retired General Chiwenga as the new Minister of Health.

Award winning journalist Hopewell Chin’ono who was exposing corruption at the highest levels in Zimbabwe is still incarcerated. Hopewell has been repeatedly denied bail and yesterday was moved to Chikurubi Prison in Harare. He is not forgotten, nor are all the other brave Zimbabweans whose names and horrific stories have filled our minds and hearts in recent weeks.  Nor are the lives of millions of ordinary Zimbabweans struggling to survive 780% inflation and a government that has forgotten them. It was heartbreaking to see two Mums shopping in a supermarket this morning, picking up and putting down all the food they cannot afford: bread, maize meal, sugar, margarine, rice, even vegetables. All #ZimbabweanLivesMatter

Until next time, thanks for reading this Letter From Zimbabwe, now in its 20th year, and my books about life in Zimbabwe, a country in waiting, love cathy. 8 August 2020. Copyright © Cathy Buckle.  http://cathybuckle.co.zw/
For information on my books about  Zimbabwe go to www.lulu.com/spotlight/CathyBuckle2018 For archives of Letters From Zimbabwe, to see pictures that accompany these articles and to subscribe/unsubscribe or to contact me please visit my website http://cathybuckle.co.zw/