Robert Mugabe died on 6 September last year, aged 95 in a Singapore hospital, two years after he was forced to resign in 2017, and after 37 years in power. 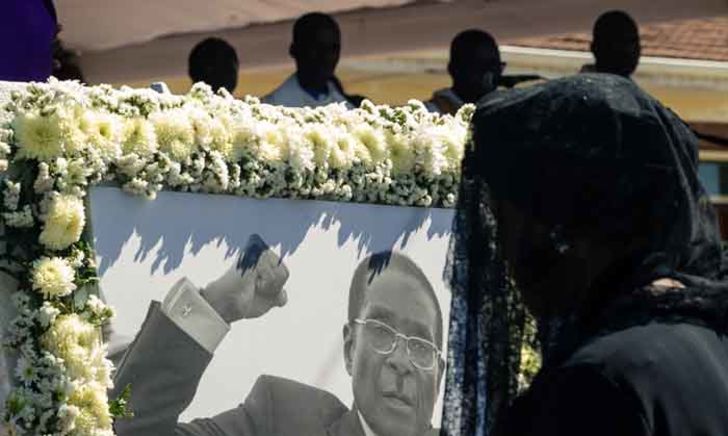 FILE: Former first lady Grace Mugabe walks past a portrait of Robert Mugabe during the burial of the former Zimbabwe leader at his home village in Kutama, on 28 September 2019. Picture: AFP

CHITUNGWIZA – Despondent and waiting in a long queue for daily food handouts from a well-wisher, Milka Mandimutsa ges nostalgic about Zimbabwe’s autocratic and longtime ex-leader Robert Mugabe, who died a year ago.

Had Mugabe been still ruling Zimbabwe, “I don’t think it (life) would be like this,” said the woman, in her late 20s, waiting to receive a portion of cooked beans and white maize meal in the working-class town of Chitungwiza, 30 kilometres south-east of Harare.

“He was far much better,” said the unemployed Mandimutsa, who was born after Mugabe was already a decade in power.

Another woman in the queue echoed her sentiments.

“Ever since the new president took power, I have not seen anything positive,” said Diana Nhemachena, also in her 20s, bemoaning the high cost of living in the country where official inflation is more than 800%.

Mugabe died on 6 September last year, aged 95 in a Singapore hospital, two years after he was forced to resign in 2017, and after 37 years in power.

His successor Emmerson Mnangagwa came in with promises to fight corruption, revive the moribund economy and reduce poverty.

But many Zimbabweans say they are worse off than they were under Mugabe despite his creating an authoritarian regime which savagely repressed opponents.

He is also remembered for implementing controversial land reforms 20 years ago that resulted in economic collapse.

But far from being the expected messiah, Mugabe’s former deputy Mnangagwa has also become known for brutally crushing his opponents.

A month ago, he threatened to “flush” out bad “apples”, two weeks after an opposition politician and a journalist were arrested on charges of incitement to commit public violence.

Politician Jacob Ngarivhume’s crime was calling for non-violent protests on 31 July against state corruption and journalist Hopewell Chin’ono tweeted in support of the planned demonstrations.

They were released on bail on Wednesday after 45 days in detention.

Other critics, including an opposition lawmaker, are still being held.

“Much as he (Mnangagwa) says he …is soft as wool, people who knew him well called him ‘ngwena’ which means crocodile,” said Harare-based political analyst Cyprian Ndawana.

“The citizenry is roundly impoverished, reduced to a lifestyle of ferreting for basic sustenance”.

“It is now a headache to be alive. Life is a grind. It is now a mammoth task for households to score the minimum goal of putting food on the table,” he said.

Zimbabwe’s economy improved during a power-sharing government between Mugabe and the main opposition Movement for Democratic Change, but since the deal crumbled, the economy has been on a downturn for over a decade.

This week the government unexpectedly announced plans to give some land back to white farmers.

The announcement created confusion and forced the government to re-issue statements clarifying the plans.

It later emerged that only 37 of more than 4,000 farmers who were evicted would be eligible for the reinstitution of title to their land. They are a special group of foreign farmers who enjoyed protection under an international investment deal.

For Harare-based independent economist Gift Mugano, while “Mugabe was not good … the current government has gone further than Mugabe”.

“Nothing has changed apart from the fact that the current government has gained more experience in killing the economy,” Mugano told AFP.

The government insists there is no crisis in the country.