HARARE – Up to 60 MDC Alliance youths entered the party’s Harvest House headquarters in central Harare on Sunday night, four months after the building was occupied by the rival MDC-T party with the help of security services. 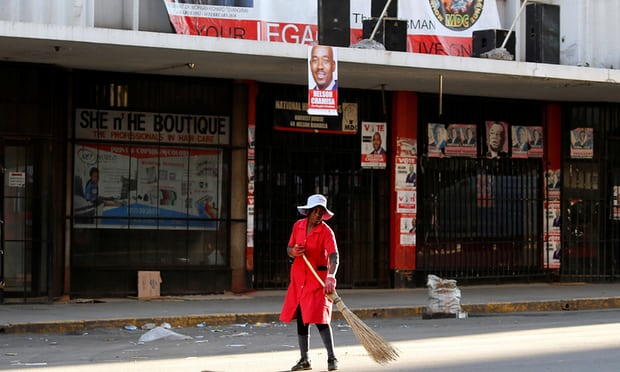 FILE: A woman sweeps the street outside the opposition headquarters in Harare. Photograph: Philimon Bulawayo/Reuters

The youths told ZimLive by phone that they had “found each other” with a section of the youth leadership loyal to MDC-T leader Thokozani Khupe.“We have just recovered Harvest House. It was a nice and clean retake,” an MDC Alliance youth leader said from inside the building, asking not to be named because he said all would be explained at a news conference at 10AM on Monday.

Paul Gorekore, the MDC-T’s current youth chairman for Harare province, is believed to have facilitated the latest occupation, accusing Khupe of “aiding the suffering of the masses” through working with Zanu PF.

In a brief statement, Gorekore said: “MDC-T Harare province (2014 structures) has taken over control of the party HQ tonight. This has been necessitated by our realisation o the need to unite the people in the fight for a better Zimbabwe.

“We as the youths have decided to go beyond our differences and unite to resolve the current crisis. We have been concerned by recent developments where the party (MDC-T) has been infiltrated by some Zanu PF elements battling to destroy the people’s movement thereby aiding the suffering of the masses.”

The youths said they had taken contingency measures, including changing locks and using chains to fortify the entrances.

Previous attempts by the MDC Alliance leadership to take back the building saw the party’s deputy leaders Tendai Biti and Lynette Karenyi-Kore being arrested. The youths told ZimLive they expected police and the military to try and reclaim the building for Khupe. The military has previously denied facilitating the initial occupation.

The leadership of the MDC Alliance party has been disputed since a March Supreme Court judgement which said the party’s leader Nelson Chamisa was illegitimate for failing to follow the party constitution when he succeeded founding leader Morgan Tsvangirai in February 2018.

The court said Khupe, having been elected as Tsvangirai’s sole deputy at a previous congress held in 2014, should have assumed interim charge pending an extraordinary congress.

But by the time that judgement was delivered, Chamisa had led the MDC Alliance into an election in which he narrowly lost to Zanu PF leader Emmerson Mnangagwa. Khupe took part in the elections in July 2018 as leader of the MDC-T.

Khupe has used the judgement, which the MDC Alliance says was engineered by Zanu PF, to assert herself as leader of the MDC-T party, and also the Alliance, while moving to claim the party’s properties as well as funding due to it from the government.

Despite winning just two seats in parliament through proportional representation, she is now claiming leadership of over 100 MDC Alliance lawmakers and hundreds of councillors across the country. Those who reject her leadership have been recalled, including 24 MPs and Senators and dozens of councillors.