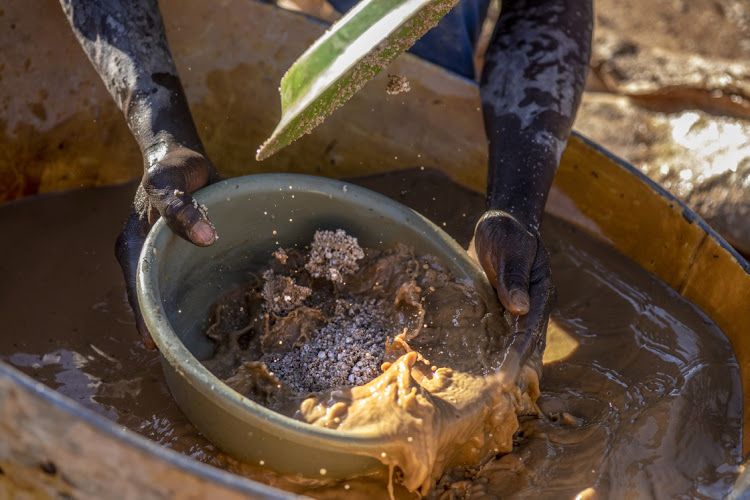 An artisanal miner sifts through crushed ore for gold particles at a small-scale gold mine in Umguza, Zimbabwe. Picture: BLOOMBERG VIA GETTY IMAGES/CYNTHIA R MATONHODZE

This memorandum serves as an update to my previous memoranda in connection with the above subject matter.

On 26 August 2020, Informant made a report at ZRP Venice Base to the effect that her late sisters plot had been invaded by illegal gold panners.

As a result, members drawn from ZRP Battlefields and Kadoma District Reaction Group teamed up, reacting to the supplied information and attended the scene.

Upon noticing the arrival of the uniformed police officers, illegal gold panners fled away from the scene and purportedly left gold ores with visible nuggets. The visible gold nuggets with an approximate weight of about 2 kilograms were allegedly picked up by the informant and to the police officers who took them ZRP Venice base. The gold nuggets were subsequently handed over to Police at Venice Base under OB number 718/20 for safekeeping.

Detectives from CID Minerals Flora and Fauna Unit Kadoma who later reacted to the received information, arrived at the gold rush site well after the illegal gold miners had dispersed. They then proceeded to ZRP Venice Base where they came to know about the recovered gold nuggets. They did not take the recovered exhibits to station waiting for proper handover / takeover process after the compilation of initial documentation as per procedure.

On 26 August 2020, Micah Sibanda aged 50 years NR not held of plot number 3A, Venice farm, Battlefields later reported to ZRP Venice Base to have mining rights on the gold rush site. He then produced a Certificate of Registration in respect of BEMEGA MINING SYNDICATE under registration number 9675. Same was advised to proceed to CID minerals Flora and Fauna Unit, Kadoma with his mining documents for verification with the Ministry of Mines and Mining Development on 27 August 2020. She was also advised to engage private security company to protect the property from illegal gold panners.

On 27 August 2020, accused [01] Micah Sibanda reported at CID MFFU Kadoma accompanied by accused [2] to [04] with his mining documents claiming mining rights over the gold rush site. They were also claiming to be the owners of the recovered gold nuggets. Verifications were made with the Ministry of Mines and Mining Development, Chinhoyi offices where it was established that the mine forfeited in June 2019.

Following that development, warned and cautioned statements were recorded the above cited four accused persons being charged for, Prospecting for Minerals without a permit or licence in contravention of section 368 [1] of the Mines and Minerals Act, Chapter 21:05. They were released on summons to 31 August 2020 pending full investigations into circumstances surrounding the recovery of the gold ores.

On 29 August 2020, Gostaff Gomo aged 38 years NR 58-210737P 58 of 6352 Link Drive Golden Acres, Kwekwe came to CID MFFU Kadoma and furnished the office with a Prospecting Licence number 070262AA in the name of Trump – Tower Minerals [Pvt] Limited Company issued on 31 January 2020. He also claimed to be the owner of the recovered gold ores and further purported that the above cited four accused persons were his employees whom he had tasked to prospect for miner ores at the gold rush site.

Given the conflicting statements given by him and that previously given by four accused persons, it became clear that Gostaff Gomo was a mere opportunist who wanted to use the four accused to steal the recovered gold ore. He was later dismissed after a Warned and Caution Statement was recorded from him charged with the same offence with the four mentioned accused persons.
A letter of request was sent to the Office of the Provincial Mining Director to ascertain authenticity of the Prospecting Licence availed to police by Gostaff Gomo.

On 02 September 2020, the accused namely Rashid Takabell and Ishmael Chariwa reported at CID MFFU Kadoma accompanied by Sakile Mnangagwa aged 31 NR 63-3133277 B 67 of Plot 1 Sherwood farm, Kwekwe and Gostaff Gomo aged 38 NR 58-210737 P 58 of 6352 Link Drive Golden Acres, Kwekwe. Sakile Mnangagwa purported to be a business partner of Gostaff Gomo at Trump-Tower Minerals [Pvt Ltd]. They continued to claim ownership of the recovered mineral ores and demanded that the Police should hand over the recovered exhibits to them premised on the above cited prospecting licence.

In addition, they began to implicate Police officers from ZRP Battlefields as having engaged in illegal mining activities in connivance with them on the day the mineral ores in question were recovered. They further highlighted that an arrangement had been made between the alleged Police officers and them were to share proceeds which would result in the Police officers getting a share of 10% of the spoils. Statements were recorded from other independent witnesses, where it was established that Number 053995P Inspector Ndhlebe, 982412N Sergeant Mero and 087025R Constable Bhangu where among the Police officers who took part in the illegal mining and where given US$420-00 after sharing money realized from 40 grams of gold after milling.

In light of the above circumstances, we are contemplating charging the Police Officers separately with Criminal Abuse of duty as a Public Officer as defined in Section 174 of the Criminal Law (Codification and Reform Act Chapter 9:23 and jointly charging them for Contravening Section 368 of without a permit or licence.

In light of the above circumstances, the accused are being charged for Contravening Section 368 of the Mines and Minerals Act: Chapter 21.05 Prospecting for minerals without permit or licence. Accused (5), (6) and (7) are further being charged for Theft as defined in Section 113 of the Criminal Law (Codification and Reform) Act Chapter 9:23.

Your office will be appraised of the new developments.