While there were reports that the construction of the Kunzvi Dam in Zimbabwe has stalled after the government failed to make payments to the Chinese constructors, the Charge d'Affaires of the Embassy of Zimbabwe in China told the Global Times in an exclusive interview that the project is still on track despite some financial difficulties. 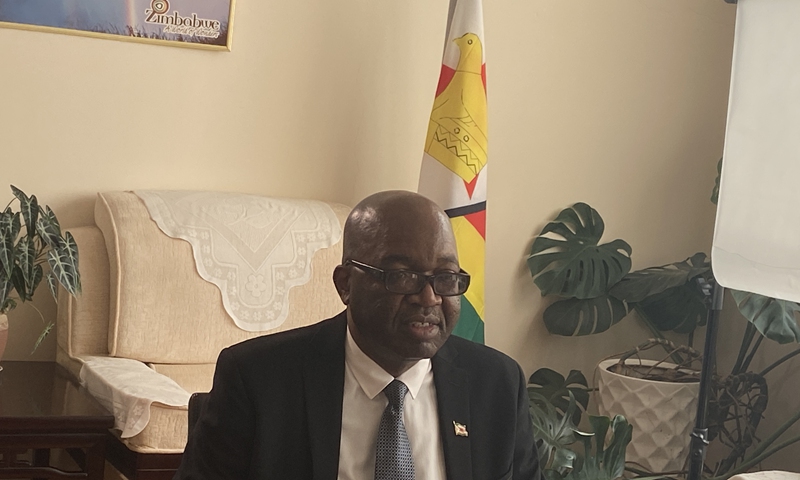 Due to the sanctions and this year’s drought, the government faces some financial difficulties, but the dam project remains one of the country’s key projects. However, the timetable for restarting the project is undecided yet, said Charge d’Affaires Mqabuko Spencer Dube.

Dube slammed the sanctions imposed by the US and the EU on Zimbabwe, saying they have seriously affected Zimbabwean people’s lives.

Asked for his opinion about the US constantly using sanctions to threaten other countries to achieve its own ulterior motives, Dube said that such “unilateral coercive measures, or embargoes or sanctions by any country should be condemned.”

“It is illegal. And the big powers that impose sanctions don’t care about the people in those countries that are affected,” he added.

In September, Zimbabwe revoked its decision to license Chinese companies to conduct mining in Hwange national park, according to media reports.

Responding to this news, Dube told the Global Times that the Chinese companies were given other areas in which to continue their projects.

“The [Zimbabwe] government is actively looking at allocating areas for those companies,” he said.

While the original project faced criticism from some ecological campaigners, Dube rejected this. “China and Zimbabwe are very active in conservation. We actually get support from the Chinese government in conservation,” he said.

The diplomat praised China’s help in combating COVID-19. “When COVID-19 first broke out in Zimbabwe, China was the first to come and support us.”

Not only the Chinese government, but also the Chinese business community in Zimbabwe supported the battle against the coronavirus, including donating masks and training local doctors and nurses, he said.

Dube also said Zimbabwe is willing to cooperate with China on vaccine trials.

Despite China’s efforts to help other countries in the global fight against the coronavirus through sending masks and vaccine cooperation, these gestures have been smeared by some Western countries and politicians as “vaccine diplomacy.”

Dube said such attacks against China are “ill-founded.”

“This is about saving lives. I think it’s being mischievous if you say that this is vaccine diplomacy. There’s nothing like that. China is helping other countries so that the people in those countries survive the virus. Some people are just politicizing the issue,” he said.“The pandemic is something the whole world should come together to fight.”

He noted that Zimbabwe can continue strengthening cooperation with China in areas including renewable energy, tourism and agriculture.

“Zimbabwe has lots of land. Chinese companies can utilize the land to grow some of the crops that they need for export. We also want to increase cooperation in areas including education, science, and technology.”