Takudzwa Ngadziore, the President of the Zimbabwe National Students Union left for dead after being attacked by Zanu PF thugs while he was addressing a press conference following his release from remand prison earlier in September. (Photo: Supplied by activists who do not feel safe to gives names)  Less Thandekile Moyo is a writer and activist 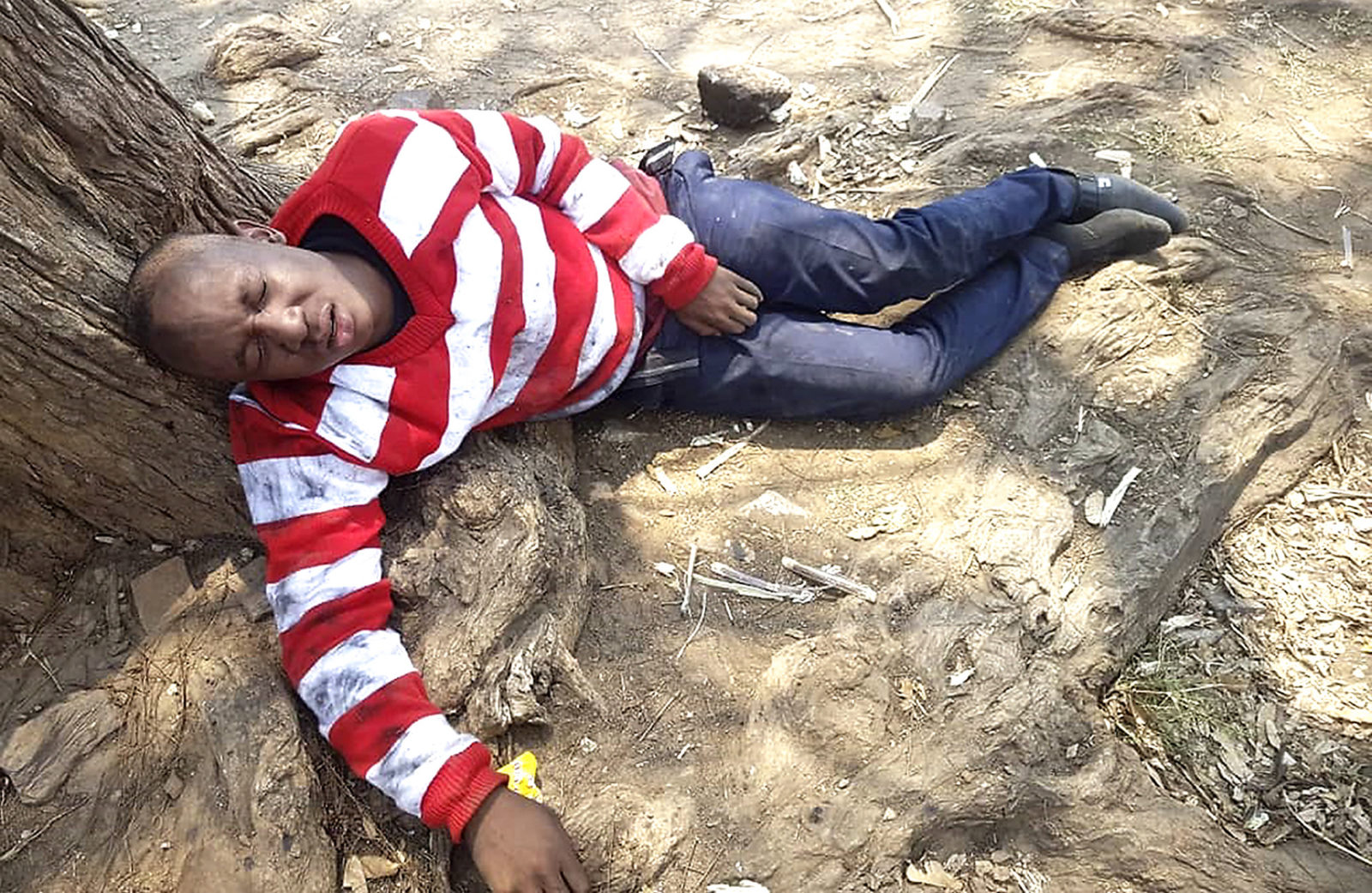 Takudzwa Ngadziore, the President of the Zimbabwe National Students Union left for dead after being attacked by Zanu PF thugs while he was addressing a press conference following his release from remand prison earlier in September. (Photo: Supplied by activists who do not feel safe to gives names)  Less

Thandekile Moyo is a writer and activist from Zimbabwe who refuses to keep silent about the abuse of power, corruption and torture. In this third article in her series, Witness to an Abduction, she describes the circumstances leading to the arrest and torture of 21-year-old student leader Takudzwa Ngadziore because of his campaign to get car hire company, Impala Car Rental, to tell the truth about the use of one of their cars in an abduction. At the time of writing, Ngadziore was in custody and had been denied bail.

I remember the day I first met Takudzwa Ngadziore like it was yesterday.

“I follow you diligently. I love your tweets,” he gushed.

What he didn’t know was I had been eyeing him the whole time and asking myself “Where have I seen this young man before?” He is so young, 21 years old. But he exudes at the same time, an aura of genuine humility and unmistakable power. Something like what they call quiet confidence.

And then it hit me! “Aren’t you the guy that held a rally at the market?” I asked him excitedly.

We hit it off from day one.

On the night of 7 September, I had a conversation with a few comrades about the need for us to organise a protest to demand answers from Impala Car Rental. We agreed that since they know who hired the car that was used in the abduction and disappearance of Tawanda Muchehiwa, and know exactly where it went as all their cars have trackers, it was necessary for them to cooperate with the investigation. We cracked our heads about how best we would do it since we are in different parts of the country and since many political activists and human rights defenders had to go underground in July when the president declared war on dissidents. We agreed we would sleep on it and see how best it could be done.

On 8 September around midday, I was shocked to see a video of Takudzwa Ngadziore, Makomborero Haruzivishe and several other comrades holding a protest outside the Harare offices of Impala Car Rental.

“Impala must tell us who abducted Tawanda and how, because we believe that the Zimbabwe we live in should be a safe Zimbabwe. We believe that Justice for Tawanda should be served,” said Ngadziore to loud cheers at the protest.

I immediately called them to find out if they were okay. I remember telling them how proud I was of them for the solidarity and their agency. I also gently reminded them about the importance of not forgetting we are fighting a bloodthirsty government. They said the state will have to eventually arrest us all because they were not going to stand by and watch people’s rights trampled upon; students’ rights.

On 10 September I got this message from a comrade:

“They just picked up Taku for the Impala demo. He was arrested as he was attending another court case.”

In a normal country, it would be shocking that a person was arrested for peacefully demanding justice for a torture victim.

Takudzwa Ngadziore had been arrested in February 2020 for organising a protest to free Makomborero Haruzivishe, a political activist who has been in and out of prison countless times since 2010 for fighting for a free Zimbabwe. I will write more about Makomborero in another article.

Takudzwa had gone to court on 10 September for the commencement of the trial for his February arrest. When he got out of court, he found police waiting for him and they arrested him and charged him with participating in a public gathering. They kept him in custody until 14 September, when they released him with bail conditions stating he was not allowed within 100m of Impala Car Rental’s offices.

While he was in custody nine students from ZINASU were also arrested for holding a peaceful protest outside the court where Ngadziore’s bail hearing was taking place. The state rounded them all up and threw them in jail for days.

Upon his release, Takudzwa Ngadziore announced that he was going to hold a press conference 101 metres from the Impala Car Rental offices on 18 September. We would not stop fighting for Justice for Tawanda, he said.

True to his word, on Friday 18 September, Takudzwa and his ZINASU team addressed journalists. They made sure they were more than 101 metres from the Impala offices, in line with the court order. The Zimbabwe Republic Police had also deployed several armed officers at the venue.

As Ngadziore was making his statement, men dressed in civilian clothing jumped out of unmarked cars and attacked the journalists and students. In front of armed policemen and in full view of the press, some of whom were live-streaming the event on Facebook, Ngadziore was abducted. His abductors went on to heavily assault him after which he was arrested again.

Because he was seriously injured, police were forced to take him to a state hospital in Harare. The doctor who attended to him apparently advised that he would have to be admitted, but the police refused and took him back to prison.

Ngadziore said one of his ears had been hurt during the assault and he was afraid there could have been internal bleeding as his ear was blocked. He had also suffered from at least three blackouts after the assault.

His assailants wanted him dead, it seems.

Ngadziore has not broken any laws, but he spent yet another weekend in jail and on Monday 21 September he was denied bail. This is a serious infringement of his rights.

The Zimbabwean Constitution in section 59 says:

“Every person has the right to demonstrate and to present petitions. But these rights must be exercised peacefully.”

All the protests Ngadziore is being persecuted for were peaceful and observed Covid-19 protocols. He is only in jail to try to stop people from demanding justice for Tawanda Muchehiwa and to intimidate people demanding answers from Impala Car Rental.

The Government of Zimbabwe abducted Tawanda Muchehiwa on 30 July and kept him incommunicado for three days, during which he was tortured and left on the brink of death. Private investigations have proven beyond reasonable doubt that it was the state that perpetrated these crimes of torture and enforced disappearance, both crimes against humanity under international law.

Impala Car Rental holds the missing piece of this puzzle. All their cars have trackers, so they have a map of where the state took Tawanda to be tortured. Impala also has a copy of the driver’s licence of the person who hired the car.

The Zimbabwean government has captured all the country’s institutions and therefore has the power, ability and resources to persecute anyone who dares demand justice for Tawanda Muchehiwa.

We believe the place where Tawanda was taken is possibly a torture camp that holds evidence of abductions and could solve cases such as the disappearance of journalist and activist Itai Dzamara, who was abducted while getting a haircut and has never been seen again. To prevent anyone from getting this information from Impala Car Rental, they are using the police to prevent protests, Zanu-PF thugs and CIOs to assault activists, the courts to deny them bail and prisons to exert maximum discomfort.

There is a serious governance crisis in Zimbabwe. The state is captured. The economy has collapsed. Those in charge have no capacity to solve the country’s problems. They are the cause of most of those problems. To hold on to power despite their failures, they are ruling by force. Our country is in the hands of criminals. DM/MC

Thandekile Moyo is a writer and human rights defender from Zimbabwe. For the past four years, she has been using print, digital and social media (Twitter: @mamoxn) to expose human rights abuses, bad governance and corruption.