The latest move to militarize Zimbabwean society appears an attempt not to reward career military officers who remain loyal to the ruling ZANU-PF party but to exert control over a different group of professionals who have been pressing for reform. 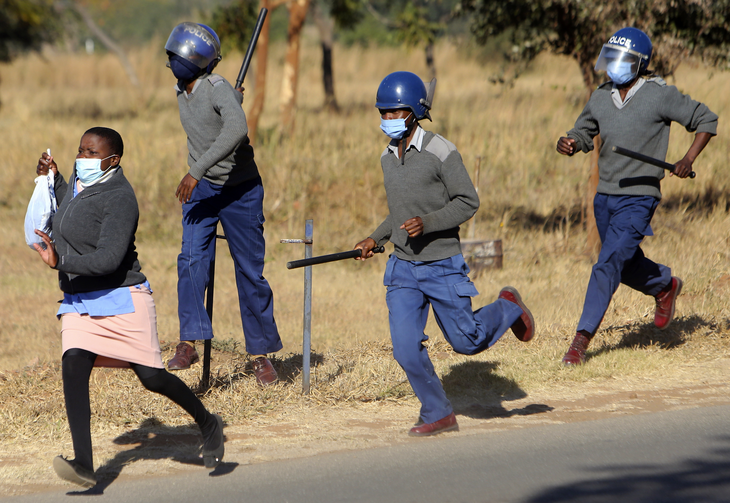 Zimbabwe riot police break up a protest for better pay and personal protective equipment by nurses in Harare in July. (AP photo/Tsvangirayi Mukwazhi)

In December 2017, a month after Robert Mugabe’s sudden fall from power in Zimbabwe, his successor Emmerson Mnangagwa appointed Constantino Chiwenga, an army general, to serve as vice president. That decision was interpreted by many as a reward for leading the coup that ended 37 years of Mugabe rule.

More appointments of military men followed Mugabe’s departure. Sibusiso Moyo, the general who announced Mugabe’s ouster on national television, became the Minister of Foreign Affairs; Perence Shiri, a former air marshal (who died of complications related to the coronavirus in July), was appointed agriculture minister. Other army generals were appointed to diplomatic posts around the world despite their lack of diplomatic experience.

This militarization of state and public institutions in Zimbabwe has been a consistent aspect of Zimbabwean life since the Bush War that ended British colonial rule as former military officers are elevated to senior government positions. Army service members continue to find their way into parastatals and even into positions on the much-criticized Zimbabwe Electoral Commission.

Former soldiers have been appointed to top positions in publicly-owned enterprises like the Zimbabwe Broadcasting Corporation, Zimbabwe National Water Authority, and the Tobacco Industry and Marketing Board. The military was even able to impose its influence in sports, when Eliot Kasu, a retired brigadier-general, was appointed to the board of the Zimbabwe Football Association.

But the latest move to militarize Zimbabwean society appears an attempt not to reward career military officers who remain loyal to the ruling ZANU-PF party but to exert control over a different group of professionals who have been pressing for reform.

In August Mr. Mnangagwa appointed Mr. Chiwenga to a double role as the minister of health and child care after a series of wildcat strikes by doctors and nurses seeking better salaries and working conditions. Doctors had staged a similar strike for better pay in 2005. At that time, Mr. Chiwenga, recently appointed the first commander of the armed forces, is alleged to have threatened Zimbabwe’s doctors with detention.

Faced with a contemporary uprising from the nation’s medical corps, the former army general announced in October that this time in an unprecedented act the government intends to conscript junior doctors into the military. The news was met with dismay by doctors and labor unions alike. They perceive the conscription as an attempt to stop doctors from demanding better working conditions. Members of Zimbabwe’s uniformed forces are not allowed to go on strike.

In a statement issued soon after Mr. Chiwenga’s letter to health ministry officials went public, the Zimbabwe Congress of Trade Unions called this militarization of the medical field “a ploy by the government to intimidate the doctors who, over the years, have been taking industrial action demanding better pay and improved conditions of services.”

The Z.C.T.U. pointed to other suspect changes at the ministry that add to the military’s oversight of health and child care in Zimbabwe. “The president also appointed Jasper Chimedza, the ministry’s permanent secretary. Chimedza is Air Force of Zimbabwe Air Commodore,” the Z.C.T.U. complained, adding, that it will “not be easy for health personnel to demand a living wage under the watchful eye of the military men at the helm of the ministry,” a widely echoed sentiment.

“What great a distress was brought upon us as a nation when the plight of our doctors was a few days ago responded to by that terrible proposition to turn our civilian doctors into soldiers,” said Bishop Raymond Tapiwa Mupandasekwa, C.Ss.R, of Chinhoyi, in a homily offered on Oct. 4. “The freedom party [Zanu-PF] refuses to give freedom of choice by refusing to listen to the cries of the distressed doctors. Instead, they propose more distress.”

Vatican News reports that medical personnel in Zimbabwe regularly stage strikes because of poor salaries and working conditions and to press for improvement to inadequately resourced public health facilities. The nation’s public hospitals face constant shortages of medicine, equipment and, with the onset of coronavirus pandemic, personal protective equipment.

Worried that many young doctors will simply move away to take medical appointments elsewhere, the bishop said that Zimbabwe’s health system would be devastated by the government’s policy. “Western countries are now reaping where they did not sow, taking our young doctors,” he said, “while the country that gave birth to them continues to suffer from a desperate situation of hospitals without doctors.”

The bishop added, “The poor are always the victims.” Bishop Mupandasekwa’s words follow previous messages from the Zimbabwe Catholic Bishops Conference this year lamenting widespread suffering and human rights abuses in the country.

The Catholic Commission for Justice and Peace in Zimbabwe said that for the country’s problems to be properly addressed, the military must be removed from key institutions, like the high courts, where former soldiers were accused of helping to entrench the rule of the Mugabe and now of doing the same for Mr. Mnangagwa.

“There is a conflation between the state and ZANU-PF,” said Paul Muchena, the commission’s national coordinator. “Government operates as an extension of ZANU-PF, where crucial decisions can only be implemented if they are in favor of ZANU-PF.”

According to Mr. Muchena this connivance between the state and the ruling party has compromised democratic processes in the country. “Army, Intelligence service and police are led by ZANU-PF sympathizers, who instead of adhering to their constitutional mandate, toe the ZANU-PF line,” he said.

The militarization of the state of course began long before Mugabe’s removal from power.

Senior military officers who served with Mugabe in Zimbabwe’s independence fight did not shy away from openly pledging their support for the ruling ZANU-PF when it won the country’s first national election in 1980. They were frequently rewarded with government positions in the aftermath of their military service.

In 2002, Zimbabwe’s generals famously declared that they would never salute a president without liberation war credentials, a sharp jab at the then-popular opposition leader, the late Morgan Tsvangirai.

But the militarization of Zimbabwe civil society may be accelerating under Mr. Mnangagwa. A recent report studying the public perception of the military’s role in Zimbabwe’s political transition found that “militarization has worsened in the post-Mugabe era.”

According to the Zimbabwe Democracy Institute, Zimbabwe’s military remains “the supreme power-bloc in transition politics.” It reports that the post-Mugabe government has placed “much military effort on the electoral process and the exercise of the freedom of protest and media as key areas of military blockade of [democratic] transition in Zimbabwe.”

The report was yet another reminder of Zimbabwe’s tense political situation. Military men and veterans of the 1970s war of liberation have openly threatened a return to war if the ruling ZANU-PF loses an election.

“They bring bloodshed. They kill. Instead of freedom they bring prison,” Bishop Mupandasekwa said of the current government. “They bring violence and imprison all those who oppose them. The only thing they know is violence.”