In this Voices from the Communion, Rev. Elitha Moyo Gender Justice Coordinator for the Evangelical Lutheran Church in Zimbabwe talks about the importance of men and women being involved in the mission to end Gender Based Violence. She shares her call to the ministry of gender justice. 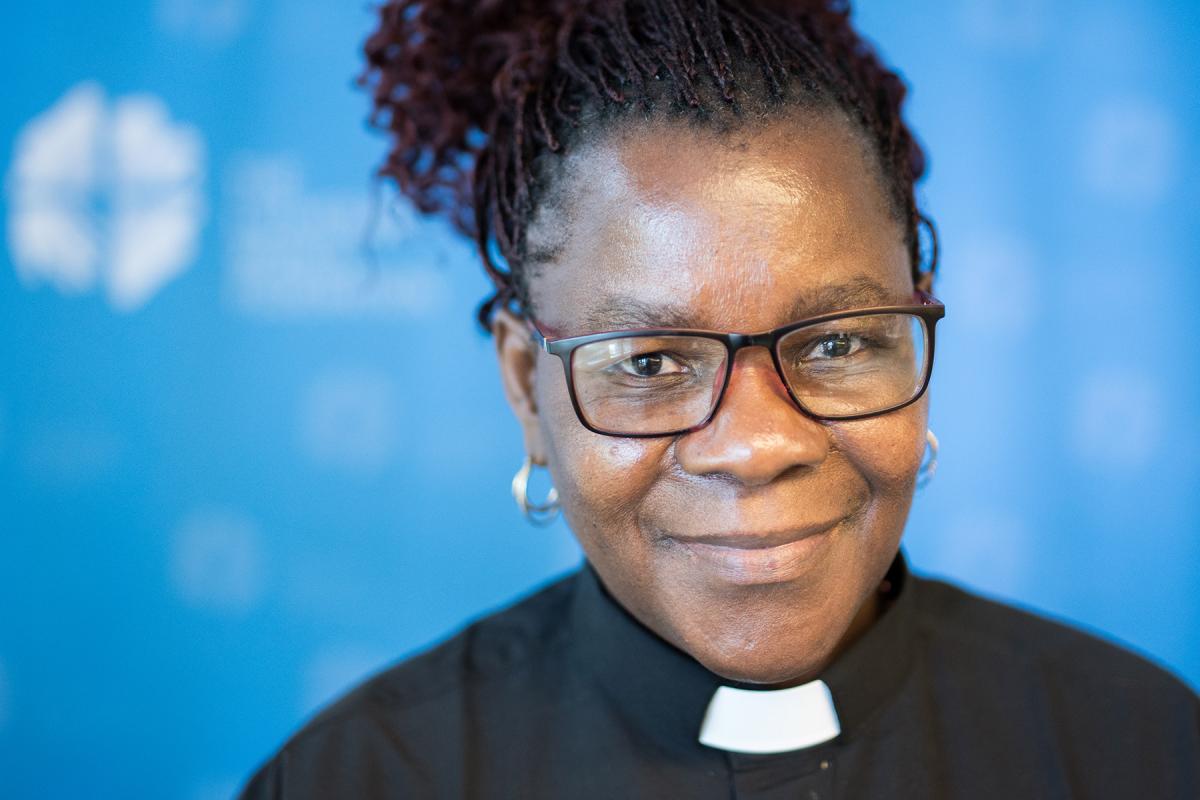 Rev. Elitha Moyo Gender Justice Coordinator for the ELCZ says, “We need to appreciate each other regardless of gender.” Photo: LWF/Albin Hillert

(LWI) – Rev. Elitha Moyo of the Evangelical Lutheran Church in Zimbabwe (ELCZ) feels strongly about cooperation between the genders to end forced, child marriages, early pregnancies and Gender-Based Violence. Moyo, the Gender Justice Coordinator for ELCZ and an LWF Council member says that men and women working together will end cycles of abuse and everyone will flourish.

Moyo along with the three ELCZ diocese and local officials noticed an increase in violence against women and children when Coronavirus disease (COVID-19) pandemic struck the communities. This observation sent Moyo and the ELCZ Gender Justice Project, funded by the Lutheran World Federation since 2012, into the Eastern, Western and Central districts of Zimbabwe, combining COVID-19 sanitation awareness with the existing gender-justice campaign.

Her passion and calling to leadership and gender justice has allowed Moyo to witness positive changes concerning gender issues in the most conservative communities of Zimbabwe.

As the Gender Justice Coordinator for the Evangelical Lutheran Church in Zimbabwe, how has your work become more challenging, recently?

ELCZ is not spared in this crisis caused by COVID-19, hence its members are also affected including those who support the church financially. Because our local financial supporters are affected, the church is in crisis and unable to support its workers and members.

Sexual exploitation and other Gender-Based Violence (GBV) cases were on the rise, and became exacerbated in the context of COVID 19 due to limited access to resources like water, food, and access to health facilities caused by restricted movement.

How is healthcare in Zimbabwe?

We hope that the minister of health will improve health institutions which are deteriorating. Most people seek medical care at mission and private hospitals, but unfortunately only a few can afford to go to private hospitals, and mission hospitals are not centrally located in towns and other areas where people can reach them. These mission hospitals also have challenges obtaining drugs and personal protective equipment.

There is a shortage of testing kits which means people are not being tested, therefore making the actual numbers of people infected with COVID-19 insufficient.

What are strategies of the ELCZ to assist women during this time?

In light of COVID-19 and lockdown, GBV was a great cause of concern because we know perpetrators are normally close relatives and trusted people. During COVID-19 we have witnessed an increase of early pregnancies and of GBV cases where women were killed or wounded. Issues of poverty fuel this violence.

The way for ELCZ to intervene was to help women and children through activities funded by sister churches or partners. These activities include empowerment projects in the schools and workshops for young mothers and entrepreneurial and skills training.

During some workshops, it was observed that people were free to talk and share their experiences of GBV in their families and communities in the presence of leaders. This indicates that the women and children were empowered at these workshops to speak out against GBV.

You have said men and boys are active participants in gender justice. Can you explain why?

There is a need to reach out to men and boys because they can often be gatekeepers or resisters of women’s issues. If we do not effectively engage men and boys, the efforts in the community will be thwarted or simply ignored. This is not only a women’s issue, rather it is an issue of men and women working together so that relationships are just, and that both men and women can flourish in their full potential and dignity that God has given them.

Has there been positive involvement from men?

Yes. There are a number of men who received the program well and speak about how they have changed. Some men have talked publicly about some harmful cultural practices in the church and in communities like child marriages and forced marriages.

Church members advise ELCZ Gender Justice staff if there are cases that need intervention. However, change is a process and it needs time.

One man at a workshop said, “your program is different from other organizations because you involve men in discussions and a way forward in these issues,” meaning early pregnancies and child marriages.

What inspired you to take on the role of leadership in the church and for gender justice?

I found myself passionately driven to advocate for gender justice within the church and communities. I feel God called me as pastor to this ministry for a purpose, thus, I have to leave a mark that will encourage other women.

Early on, I had and still have, the feeling that whatever men can do, in terms of opportunities and roles, women can also do, for they are human beings the same as men. We are all created for a greater purpose and we need to appreciate each other regardless of gender.

With God as my guide, I found myself penetrating even the most conservative communities – these are communities which are deeply rooted in their traditional and cultural practices – which don’t recognize the value of women.

Through God’s guidance I have seen these communities open up and willingly volunteer to leave behind some oppressive cultural practices.

What does it mean for your work that the ELCZ to be a part of the LWF Communion of Churches?