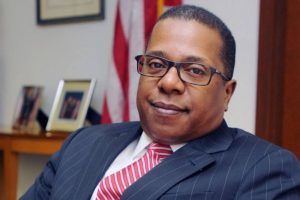 In an interview, Nichols told VOA Zimbabwe Service the government’s anti-sanctions campaign backed by the Southern African Development Community (SADC) won’t help if there are no tangible reforms in the country.

Nichols said, “The SADC anti-sanctions campaign, orchestrated by the government of Zimbabwe, is really an effort to distract the people of Zimbabwe from the real causes of Zimbabwe’s profound problems. The government of Zimbabwe would be better served by focusing on its efforts on implementing reforms that it campaigned on, that is to say deepening democracy, combating corruption, increasing respect for human rights and opening up the economy for transparent trade and investment. Those are things that will make average Zimbabwean’s lives better.”

Nihcols said America has been pressing the Zimbabwean government to implement the necessary reforms.

“Our goal is for the nation of Zimbabwe to succeed and we believe by pursuing reforms that the Mnangagwa administration campaigned on, this country could succeed. We have consistently pressed the government of Zimbabwe to implement the necessary political, democratic and economic reforms consistent with the international human rights obligations to provide Zimbabwean citizens the prosperity, security and wellbeing that they deserve. If those things happen, there would be no need for sanctions.”

He said less than 100 Zimbabweans are on the targeted sanctions, which were imposed in 2003 following alleged human rights violations and election rigging.

“I think it’s important to stress that the United States does not have sanctions against the economy or people of Zimbabwe. Our sanctions target those who engage in corruption, violate human rights and undermine democratic processes in Zimbabwe. In fact, our sanctions have only 83 individuals and 37 entities, that is to say companies or organizations linked to those people that have either committed human rights abuses or engaged in corruption. They undermine democratic spaces here in Zimbabwe, that is our concern and we are trying to point out that feeling in our program of targeted sanctions.”

The Zimbabwean government is expected to conduct what it calls an anti-sanctions gala at the weekend in an effort to force the United States to remove the targeted sanctions.

President Emmerson Mnangagwa said recently the sanctions are hurting Zimbabwe as the country can’t access lines of credit to revive industries and boost the ailing economy.