Tawanda Muchehiwa says he suffers anxiety and panic attacks and is scared of a knock at the door, after the three-day ordeal.

Tawanda Muchehiwa says he suffers anxiety and panic attacks and is scared of a knock at the door, after the three-day ordeal. 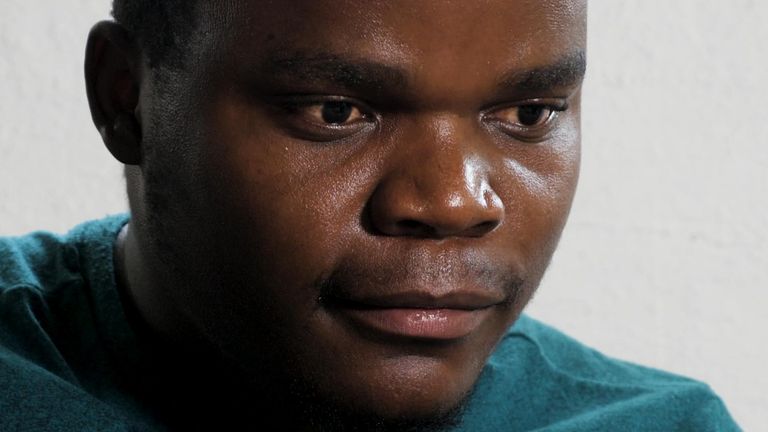 Sleep does not come easily to 22-year-old Tawanda Muchehiwa. Sometimes it arrives as the morning sun appears but there are days when his mind will not allow him any peace.

The horror he says he experienced over three fateful days in Bulawayo in Zimbabwe has not subsided.

He replays his abduction like a piece of music on repeat, seeking meaning from an experience that he does not understand.

“When I hear a knock or someone walking outside, I become really scared, I have anxiety and panic attacks,” he says as his fingers visibly shake.

“(My captors) say that if I tell the world about my ordeal, they were going to come after me and the next thing I was going to see is my coffin.”

Mr Muchehiwa says he does not know why a group of muscular-looking men, occupying five or more vehicles, came looking for him at a local hardware shop.

He went there on 30 July to pick up some aluminium sheeting with his nephews in what seemed like a thoroughly unremarkable expedition.

He was chatting in the car park with an acquaintance from Zimbabwe’s opposition MDC party, when he says the men pounced upon him.

“There comes a tall man wearing a light blue T-shirt and he just yelled ‘wasungwa’ – it’s a Shona word that means ‘you have been arrested’ and before I know it the man is dragging me out of the car… I tried to say, ‘warrant of arrest, warrant of arrest?’

“But they bundled me up, just picked me up like a light thing and bundled me in their car.”

Mr Muchehiwa thinks the men were members of the state security services, a group who have been held responsible by civil rights groups for the abduction of dozens of activists, critics and union officials in recent years.

However, this is the first alleged abduction in Zimbabwe to be caught on camera.

Grainy CCTV pictures appear to show Mr Muchehiwa being forced into a car outside the hardware shop, then transferred into another vehicle 400 metres down the street.

“They pointed a AK-47 (at) my head and they said, if you scream or raise your head, we’ll going to pull the trigger, we are going to shoot you right now,” says the 22-year old.

“Then one of the guys punched me hard and said, ‘you are not George Floyd and this is Zimbabwe – not America and anyway, we don’t want you to breathe’.”

It is not clear why this second-year media studies student was targeted by what he believes to be around 15 men in plain clothes. However, Mr Muchehiwa thinks the date of his disappearance is significant.

The country’s president, Emmerson Mnangagwa, labelled the demonstrations “an insurrection” and the army and police were moved onto the streets.

Mr Muchehiwa says his captors accused him of being one of the protest’s coordinators. Additionally, they wanted information about his uncle, Mdududzi Mathuthu, who edits an independent news site called ‘Zimlive’.

Journalist who uncovered Zimbabwe govt scandal out of jail

He said: “They wanted to know his sources of information, where does his newspaper get his funding. They also believed that he worked for the Americans and the British and through him they were saying I had also been recruited to become part of the CIA – you know it was so ridiculous.”

Mr Muchehiwa says he was driven to a dusty clearing outside the city – a hardscrabble patch where he believed he was going to die.

Mr Muchehiwa says he was strung up on a v-shaped tree and his buttocks and the bottom of his feet were flailed with sticks.

When he was untied, he claims his captors sexually humiliated him.

The 22-year old says he was taken to a farmhouse where the interrogation continued for the next two days.

He recalls the beatings and the ‘stress tests’ – like sitting on imaginary stools. These tests would generally end in more beatings.

He says he was forced to chant slogans from the ruling ZANU-PF party and told to drink his own blood-stained urine.

“They were beating me up and at some point they receive a call, I believe it is from one of the bosses and they are discussing, Tawanda is only 22 years old, we should get rid of him, just imagine if he gets to 30 he will give us a lot of problems so we should just get rid of him now and forever.”

It was on the afternoon of 1 August that a local human rights lawyer by the name of Nqobani Sithole thinks he saved the student’s life.

He obtained a court order – a writ of habeas corpus – which forced the police to find Tawanda Muchehiwa and present him at a local court.

The lawyer says a representative from the Zimbabwean attorney general’s office was present and informed him after lengthy discussions that Mr Muchehiwa could be produced within 72 hours.

Nqobani Sithole says: “As much as we knew that he’d been taken by the police and state security agents, they pretended to have no knowledge about it and we knew that something was not right.

“They (had) to be compelled by a high court order to bring back Tawanda Muchehiwa and fortunately they did so.”

The 22-year old says he was loaded into a car and driven back to Bulawayo.

At police checkpoints, Mr Muchehiwa says his captors identified themselves as “ferrets”, the name of a purported police unit that has been linked by human rights lawyers and civil rights groups to civilian abductions.

The media studies student was dumped on the outskirts of the city just before midnight on 1 August and ordered to run in the direction of his home.

Before the vehicle door was opened, however, he says they issued a series of threats.

Still, he did not have a choice.

His body was battered, he had suffered from incisions on his chest and the skin from his right buttock had been removed. Furthermore, hospital records show that his kidneys were barely functioning.

We sought a response to Mr Muchehiwa’s allegations from the Zimbabwean authorities but they did not respond to our enquiries.

In the past, a government spokesman has accused individuals of faking abductions in attempts to solicit funds from Western governments and human rights organisations.

Tawanda Muchehiwa has turned his back on his studies and gone into hiding. He nurses wounds, both physical and psychological, that he may never recover from.

Who are ‘the ferrets’?

Tawanda Muchehiwa says he was seized and tortured by members of a state security unit called the ‘ferrets’.

The so-called ‘ferret team’ is thought to be a state security organisation comprising of members of the military, police and CIO (Central Intelligence Organisation).

Their existence was first revealed in court last year when six men using balaclavas and AK-47 rifles conducted a raid on a bar which belonged to a member of the military.

The men were arrested and one team member, Sergeant Wellington Mushosho, said they were under orders to “harass (opposition) MDC members.”

Human rights lawyers and civil rights campaigners believe the ‘ferret team’ has been deliberately created outside the legal framework.

One prominent activist said: “It is basically a hit squad whose primary role is the abduction of civilians. The way they have been set up means it is very hard to hold them accountable.”

The selection of targets is believed to be largely political.

Opposition politicians, activists and union officials are thought to be vulnerable. Civilians are handed over to the police when ferret team members have finished the interrogation process, said one lawyer.

Musa Kika, who heads the Zimbabwe Human Rights Forum, says 14 civilians have been abducted this year with a total of 105 abductions being recorded since the end of 2017.

Sky News has attempted to contact the Zimbabwean government and the Zimbabwe Republic Police (ZRP) about the ‘ferret team’ but they have not responded to our enquiries.