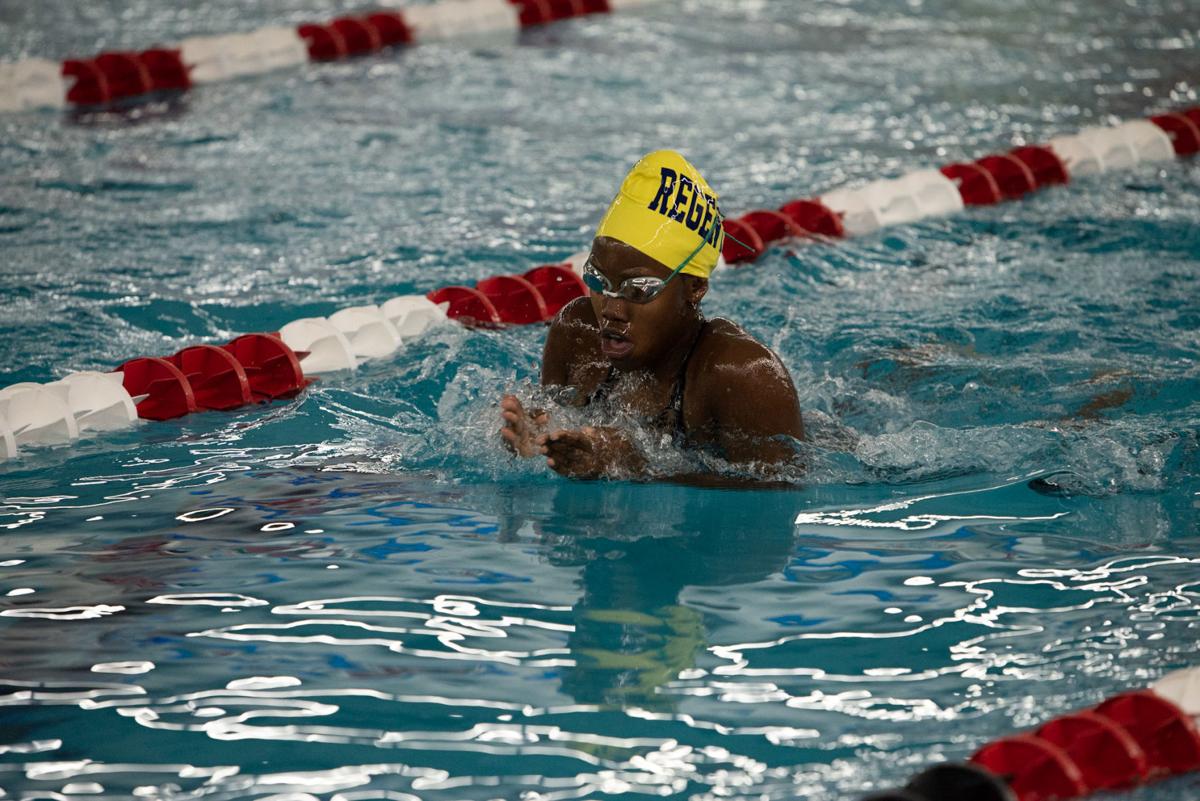 Maka Chikowero competes in the breaststroke for the Madison West swimming team. The junior also plays soccer for the Regents.

After starting in soccer as a 3-year-old, she grew accustomed in subsequent years to participating in sports, including soccer and swimming, with boys and girls.

But she found out that wasn’t how it was everywhere, including in other countries, and that shocked her.

The 16-year-old Chikowero, who was born in Zimbabwe, calls Madison “her second home” after moving with her family to the United States when she was 2.

Chikowero, who competes for the Regents’ programs in swimming and soccer, has become a social entrepreneur, wanting to evoke change for females by breaking stereotypes and creating opportunities.

She doesn’t want poverty or age to be obstacles for girls and said she wants to spread awareness about gender inequality. She is trying to help girls stay in school and provide supplies for school and athletics.

“It makes me happy if I’m able to make a difference and I am helping people who can’t help themselves,” she said.

She founded a nonprofit organization called MTC Educate A Girl Inc. that helps primarily orphaned girls in rural Zimbabwe with the opportunity to continue their educations and involvement in activities, including sports.

Donations of money and school and athletic supplies — including sports equipment, uniforms, cleats, shin guards, soccer balls, sanitary products and sports bras — have been sent to communities in eastern Zimbabwe. A fundraising soccer tournament in Madison also was held.

“It speaks to her character,” Madison West girls swimming coach Amanda Ellmaker said. “She’s very selfless and very humble. She never really talks about this nonprofit she started. I really think it’s cool that she’s taken her experience she’s gained through sports to another level. I don’t know another 16-year-old who has accomplished so much.

“She sees so much value in empowering girls, and she wants to give back to people, especially girls in Zimbabwe.”

Ellmaker said she was a bit surprised when she first learned about Chikowero’s goals.

“Many high schoolers have goals and dreams, and want to help the community,” Ellmaker said. “The fact that she thought of it, planned it and executed it, is pretty amazing. And how dedicated she is.”

Chikowero’s passion emerged when she did an elementary-school project about gender equity and how girls weren’t receiving the same opportunities as boys.

She said that led to an invitation to a United Nations youth conference in New York City as a fifth-grader and ignited her advocacy journey for women’s rights and opportunities for girls — notably in Zimbabwe, which is in the southern part of Africa and is home to Victoria Falls.

“It is such a wonderful thing to be able to raise awareness for girls who can’t for themselves,” she said.

She became a founding member of Rozaria Girls Club USA, which encourages feminism and volunteer acts among youth in Madison. It also has conducted fundraisers to send sports kits to sister clubs in Zimbabwe.

She then branched out when she started MTC Educate A Girl Inc., and is founder and president. A local soccer club, MTC Sirens, also was established.

She said tropical cyclone Idai in 2019 left many girls orphaned in Zimbabwe and that prompted her to want to start the nonprofit.

For her efforts, Chikowero was one of 147 individuals from 42 countries who was nominated for the 2020 International Children’s Peace Prize.

She also was nominated for a “2020 #SheInspiresMe” award, sponsored by the Chicago Red Stars women’s professional soccer club, and was one of three finalists in the youth (under 18) category.

On Monday, she was named the winner of the youth award.

“This is not just a win for me but for all the girls that I am supporting through my nonprofit,” she said in an announcement about the award winners. “I hope all the girls I lead feel inspired to be game-changers for a more equal and just world. MTC girls, this is for you. Remember the future is female, the future is young, and the future is bright.“

Said Madison West girls soccer coach Peter Dermody: “She is passionate about (her project) and she cares about it. She’s also a regular teenager, who’s going to school, who’s on the swim team and is playing soccer. And she’s a pretty happy young woman. But she isn’t satisfied with what she has. She continues to look for opportunities beyond those things.”

Dermody said Chikowero’s parents, Joseph and Luci, have been extremely supportive of their daughter’s pursuits.

“She’s a well-rounded student and a good athlete,” Dermody said. “She’s a great example of a student at your school and in your program.”

She’s primarily an attacking midfielder in soccer and particularly enjoys competing in the breaststroke and freestyle in swimming.

“She is very dedicated to the sport (of swimming) and very driven,” Ellmaker said. “She is an awesome teammate, too.”

She competed in the Big Eight Conference JV swimming meet as a sophomore in 2019, Ellmaker said. She was on the Regents’ freshman soccer team as a freshman, Dermody said. Girls soccer wasn’t played last spring due to the COVID-19 pandemic.

Madison West, which is using a virtual academic model right now because of the coronavirus outbreak, hopes to compete in girls swimming and diving in the alternative fall season this spring. Girls soccer then would follow in the “traditional” spring season.

“I’m super thankful to be getting a soccer season,” Chikowero said. “Both teams have such a welcoming community of girls to swim and play soccer with (at West).”

She said sports teams serve as a second family for her and she most enjoys communicating with girls in Zimbabwe about what athletics can offer, including developing friendships.

She said “it hurts my soul” when girls don’t have others to talk to or look up to, adding, “To be a guide is a wonderful feeling.”

The COVID-19 pandemic thwarted her plans to have a fundraising soccer tournament in Madison this year.

She led a drive in response to COVID-19 to make face coverings, which were sent to Zimbabwe.

Chikowero, who would like to study sports medicine in college, said her next project in Zimbabwe is to build a study center.

“In the future, Maka wants to expand the reach and impact of MTC’s scholarship and girls soccer programs,” according to her “She Inspires Me” nomination biography. “She has managed to revive hope after hurricane Idai by making this community a family for these orphans.”