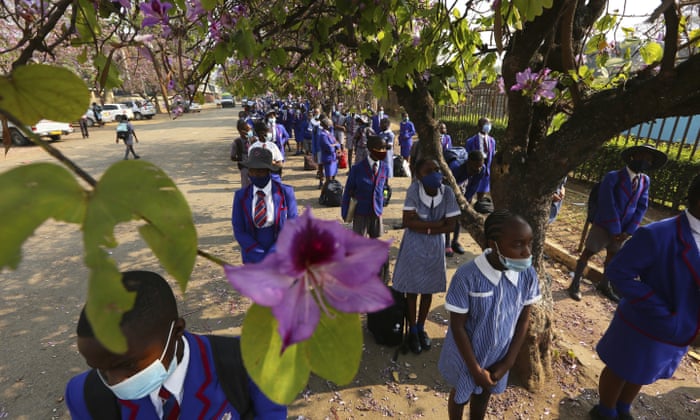 For the past fortnight we’ve been melting in Zimbabwe as we wait for the rain to move down the continent and bring us some relief. Early in the mornings when the temperature is still around 16 degrees Celsius we look up at the wide blue sky and wonder if we’ll get wet that day. The summer birds are back in abundance with Louries, Mousebirds and Barbets feasting on the ripening figs and plums, spoiling more than they eat, and under the avocado trees the White Eyes, Bulbuls and Starlings take turns to scoop out mouthfuls of green gold from fallen fruit. By midday the temperatures are up in the thirties, humidity is in the sixties and even the birds stop moving. In the afternoons clouds gather, teasing us again; the skies go grey, then purple and then disappear into the horizon.

Meeting an old man in the burning sun a few days ago we sat under a tree in the shade and caught up. We hadn’t seen each other for some time and he told me how hard his life had got in the last year. It was devastating to hear him talk about how his government pension which was US$150 eighteen months ago was now only worth US$30 a month, converted into Zimbabwe dollars by the same government he gave forty years of his life in service to. “It’s not even enough for my medicines every month,” he said. “They have forgotten us, ” he went on and I didn’t need to ask him who ‘they’ were and he didn’t need to tell me and we both watched tight lipped as a brand new SUV with tinted windows and government number plates sped past us. We talked about our families, the cost of food and the desperate wait for the rain to come so that the crops could be planted and help ease our plight. When it was time to go I asked the old man if I could take him somewhere. He needed to go to the hospital to see if they could help him with the un-ceasing pain in his legs. It took a while to get the old man into the car, helping hands to lift him, support him, turn him and pass him his walking stick and hat which had fallen off in the process. At the hospital I wasn’t allowed to drive in and the old man wasn’t allowed to walk in (because of Covid they said). He was told to wait outside the hospital gates and a nurse would come and asses him when it was his turn. There was nowhere to sit, no shade, no benches, no chairs, just a low culvert lining the hospital gateway where 30 or 40 others already waited. “Don’t forget me,” he said as we parted; “I won’t” I replied, both our eyes damp with tears. How low we have sunk in our beautiful Zimbabwe, how can we have come to this three years after the exit of Robert Mugabe, forty years after Independence.

As I write this letter children have gone back to school and teachers have gone back to work, finally having no option but to accept the government’s pay offer which will see them earning less than half of what they were earning eighteen months ago when the government converted all our US dollars to Zimbabwe dollars in pension funds, bank accounts, savings and salaries. In a damning statement, the PTUZ (Progressive Teachers Union of Zimbabwe) said: “The agreement between the government and the Apex Council (umbrella body that brings together all civil service unions) is a classic example of hostages and a hostage taker. The two have put a gun to the heads of teachers, provincial education directors, district school inspectors and school heads and now thank them for their ‘understanding’.” As it was for the doctors, then the nurses so it is now also the same for the teachers, the backbone of our land, beaten down, broken down, beholden for crumbs brushed off the table.

But, despite it all, there is hope and today it came from High Court Judge Tawanda Chitapi who granted bail to award winning, corruption exposing journalist Hopewell Chin’ono who had been held in prison for the past two weeks. Justice Chitapi said it was wrong for Magistrate Gofa to rule that Hopewell had a propensity to commit offences when she had had denied him bail.

Until next time, thanks for reading this Letter From Zimbabwe, now in its 20th year, and my books about life in Zimbabwe, a country in waiting, love cathy 20th November 2020.
Copyright © Cathy Buckle.  http://cathybuckle.co.zw/
For information on my books about  Zimbabwe and my Beautiful Zimbabwe 2021 calendar please visit my website http://cathybuckle.co.zw/books/ and watch out for the usual Black Friday discounts in the coming days from publishers LULU. www.lulu.com/spotlight/CathyBuckle2018