New York – Zimbabwean police arrested journalist Hopewell Chin’ono at his home in Harare, the capital, earlier today and charged him with contempt of court for an October 28 tweet citing judges’ alleged criticism of Zimbabwean Chief Justice Luke Malaba, according to a Twitter post by Rose Hanzi, executive director of Zimbabwe Lawyers for Human Rights. 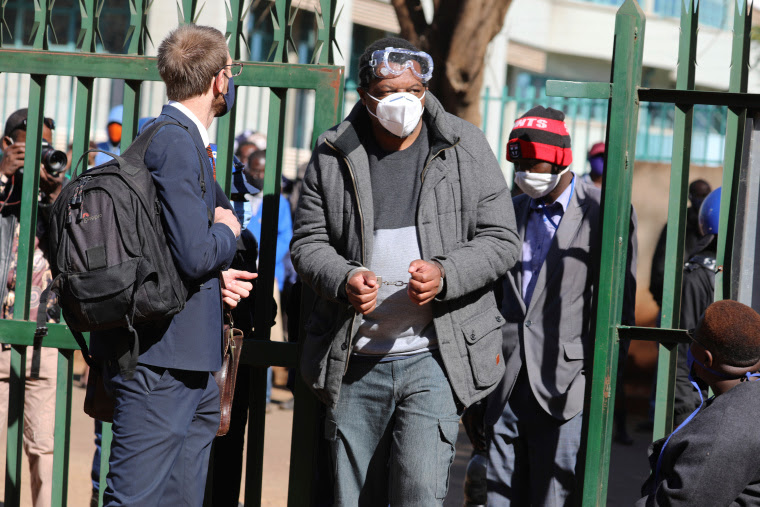 Journalist Hopewell Chin’ono is seen at a court in Harare, Zimbabwe, on July 22, 2020. Today, he was rearrested after he was released on bail. (AP/Tsvangirayi Mukwazhi)

According to Hanzi’s tweet, Chin’ono was charged with violating Section 182(1)(a) or (b) of the Criminal Law (Codification and Reform) Act because he allegedly “impaired the dignity” of Malaba, as the law states. The violation carries a penalty of up to a year in prison or fine of 1,200 Zimbabwean dollars (US$15), or both, according to Zimbabwe’s legal code.

“Today’s arrest, the latest incident in a pattern of harassment and censorship against journalist Hopewell Chin’ono, speaks volumes about the pettiness of authorities who are determined to punish him and see him return to jail for his opinions and commentary,” said Angela Quintal, CPJ’s Africa program coordinator. “This spurious charge should be withdrawn immediately and Hopewell Chin’ono must be free to report and comment without fear of reprisal.”

Chin’ono was released on bail September 2 after spending 44 days in pre-trial detention on charges of incitement following his journalistic and social media coverage of alleged corruption by the government of President Emmerson Mnangagwa, as CPJ documented at the time.

Chin’ono told CPJ today that police had told him he had violated his bail conditions, which he claimed was false since one of the conditions only precluded him from using his Twitter account to “incite the holding of mass demonstrations.”