The world of multiplayer online games is ruthless. From Tomb Raiders Reloadd being revealed at the Square ENIX Press Conference to the Xbox surprise event that was hosted in July 2020, fans were even excited about the State of Decay receiving a third installation. 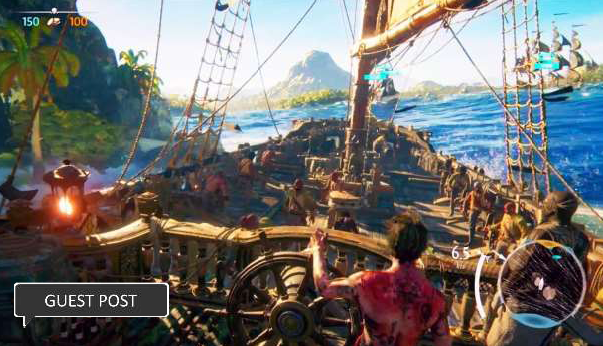 The gaming world of 2021 is going to be really exciting and something to look forward to next year. If you’ve been wondering what’s going out and have been out of the loop, here’s a list of titles to watch out for in 2021 (and why they’re at the top).

OutRiders is an upcoming RPG shooter that’s set in a dark, sophisticated, and modern sci-fi universe. It involves a bunch of scouts scavenging for resources on a foreign planet. While they’re trying to make the new terrain a base for their new home, they are faced with alien hostiles and have to fight back. It’s brutal, bloody, and is a true gamer’s hybrid since it combines RPG with first-person shooter gameplay mechanics.

The multiplayer option will be unveiled when the game is launched, and the title will be available on PC, PS4, and Xbox.

Skull and Bones will turn players into the ultimate pirates who hunt for treasures across the seas. It’s going to be coming to PCs, Xbox 360 and PS4. The creators said that there will be a competitive multiplayer mode available in the game and the gameplay mechanics will be similar to that of the Assassin’s Creed series.

Microtransactions will be supported and there’ll also be exclusive play-to- win in-game events. Ubisoft hasn’t released a lot of details besides this, and we’re still waiting to hear additional news about the launch next year.

Ludo Supreme will be getting major updates released for 2021. It’s currently trending as an online multiplayer board game and has been touted for providing a ‘nostalgic’ touch. Players get to enjoy simple gameplay mechanics, and the best part about the multiplayer mode is that you can win cash prizes.

There are online tournaments hosted, and whatever money you make instantly gets transferred directly to your bank account or PayTM wallet. You can play ludo online by downloading their app and getting started if you’re curious. This website will give you more details about their upcoming releases.

The developers at Mojang are drawing players in for a surprise with the latest Minecraft instalment. If you’ve been a huge fan of Minecraft, you know that it’s been running for years now. However, the Dungeons instalment won’t let you edit the world creatively or give any do-overs.

There will be dungeons, monsters, dragons, magic items, and special puzzles waiting to be solved. Also, with this edition, there won’t be any class systems which means players can equip or de-equip any items they want. The new Jungles DLC update is what fans are looking forward to from Minecraft: Dungeons in 2021.

Overwatch became a hit in the e-sports industry ever since it was launched in 2016. At first, it had tons of heroes and took an FPS-based approach for the gameplay mechanics. Over the years, guns and explosive weapons were added, and it turned into a mindless shooting platformer.

But Overwatch 2 will be getting a major overhaul by blizzard entertainment. The creators announced that they’d be adding campaign missions and a new class of heroes would be introduced. With the latest release, the multiplayer gameplay feature will be getting big upgrades and fans can feast their eyes on that when it arrives.

Halo Infinite continues the story of Master Chief and picks up where it left off in Halo 5: Guardians. The narrative begins with Escharum who has led the Banished to victory and taken over the Halo Ring. Master Chief has faced many formidable foes but not unlike any brute like this one. The first-person shooter gaming trailer revealed how expansive the new world is in this release. There are hidden rewards, special multiplayer campaign missions, and 343 Industries said that more will be revealed next year.

If you’re a fan of tabletop board games, you’re going to love the upcoming Soul Raiders game in 2021. It will feature over 1,000 cards for players and have an expansive storyline. There will be quests unlocked and the gameplay mechanics will be kept simple. Additionally, the illustrations are going to be made from the creators of Magic: The Gathering which means this game will look stunning when it’s launched.

Diablo is no stranger to gore, violence, and dungeon crawling adventures. However, this instalment will take a darker turn and start off with three starter classes: the barbarian, sorceress, and the druid.

Blizzard Entertainment didn’t give out any more details about the game than this and have been keeping updates under the wraps. We’ll find out next year when it’s launched, but for now, all we know is that game will have a darker art style and there won’t be any ancient items. Players will also be able to adapt. For the multiplayer mode, dungeons can be explored in parties by players and friends can play together at world events. You can play the game in solo mode if you want, but you won’t be able to turn off other players in the offline mode.

Blizzard also mentioned how the game’s UI and design would be made keeping in mind various players’ requirements and the game will have an emphasis on playing in groups, unlike the other Diablo series.

2021 is going to be a really awesome year, and with so many titles waiting to be launched, we just can’t wait. Until then, we’ll have to wait for news from the developers about future updates. If you haven’t tried out some of these games, we encourage you to give them a go.