As tensions between Zimbabwe’s ruling ZANU PF party, and South Africa’s ANC intensify – after the telling threats uttered by the former’s director of information, Tafadzwa Mugwadi, as he, typical of the Harare administration’s tactics of coercion and force, blackmailed the latter into ‘reigning in’ (sic) the SABC (South African Broadcasting Corporation) foreign editor Sophie 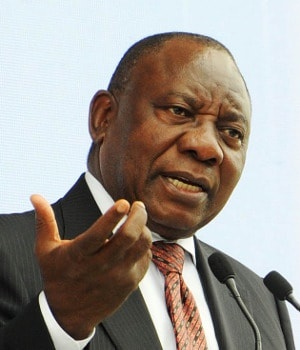 As tensions between Zimbabwe’s ruling ZANU PF party, and South Africa’s ANC intensify – after the telling threats uttered by the former’s director of information, Tafadzwa Mugwadi, as he, typical of the Harare administration’s tactics of coercion and force, blackmailed the latter into ‘reigning in’ (sic) the SABC (South African Broadcasting Corporation) foreign editor Sophie Mokoena, with the threat of ‘leaking a bombshell’ over last year’s visit to Zimbabwe by an ANC delegation – one question keeps dominating my thoughts: “Just exactly how does ZANU PF expect the ANC to achieve this goal?”

Of course, to begin with, I personally do not envision the South Africans yielding to these primitive and savage scare tactics by their Zimbabwean fellow ‘sisterly liberation movement’ (tactics of which, we, in Zimbabwe have become all too familiar with, as they have always been the hallmark of this ruinous, repressive, and brutal regime) – as already evidenced by the uncharacteristic boldness exhibited by several high ranking ANC officials, most notably, its president Cyril Ramaphosa, national chairman Gwede Mantashe, and the country’s finance minister Tito Mboweni, who have already expressed their utter disgust and revulsion at what they labelled, “a relationship with Zimbabwe (ZANU PF) that is filled with threats and intimidation”, “abusive”, and dared them to go ahead and “spill the beans”.

However, what struck me as extremely telling about these threats and blackmail, was just how ZANU PF, and the Zimbabwe regime by extension (as the two are one, based on the Chinese model that they follow), expected the ANC to rein in Mokoena – which obviously includes, the entire public media, and other South African voices that would dare question the corrupt, atrocious, and bankrupting anti-people policies cruelly exercised by their northern neighbor.

Remember, any ‘reining in’, by definition, entails the use of control and power – not, persuasion.

Let us be very clear that, the ANC, as the oldest political party on the continent, fought a bitter struggle for 82 long years, in order to usher in democracy in South Africa, achieved in 1994 – such that, this is one principle that they will protect with their every fibre and fabric.

As failure to do so, would be huge a slap in the faces of such luminaries as Nelson Mandela, Walter Sisulu, Oliver Tambo, and hundreds of thousands who lost their lives in the fight against apartheid, and everything that it represented.

Furthermore, the people of South Africa are not a weak, cowardly, and gullible lot, and are known for their intolerance of any undemocratic and anti-people activities by their government – as such, would not hesitate to take a firm stand against any such reckless and dangerous maneuvers.

That is why a quick comparison between the two countries’ public broadcasters would easily tell a story of the nature of their democracies – or, lack of.

On one hand, we have the ZBC (Zimbabwe Broadcasting Corporation), which is nothing more than an unnecessarily expensive desk in the ruling ZANU PF party’s information department, whose sole purpose is to blindly and brainlessly, parrot and praise every government/party policy and action, no matter how ridiculous, disastrous, or even murderous – whilst, on the other hand, there is the SABC, which clearly religiously adheres to the values and dictates of responsible public media, that is mandated to be the voice of the voiceless, and holding those in power accountable.

At the same time, the South Africa government has always ensured that these fundamental rights to media and expression freedoms are respected at all costs – thereby, has not interfered, and can not interfere, with the SABC (or, any other media, for that matter) editorial and staffing policies.

However, in Zimbabwe, the oppressive, threatening, and blackmailing regime has always been notorious (as the South Africans are now realizing) for dictating what should, or should not, be highlighted in the public (state) media – with reports awash of several staffers being disciplined, or fired, for apparently reporting the ‘wrong thing’ – in brazen violation of the country’s constitution, which guarantees independent editorial policy, impartiality, and fair opportunity of divergent views and dessenting voices, in Section 61(4).

This unlawful and unwarranted interference, nonetheless, does not end with the public media – as, we have witnessed independent journalists, especially investigative, not only being publicly threatened by ZANU PF senior officials, but also being persecuted left, right, and centre – with some being arrested on spurious charges, without any convictions ever being arrived at.

An internationally known case in point – although, far from being the only one – is that of Hopewell Chin’ono, a renowned investigative journalist, who was openly threatened with arrest by the acting ZANU PF spokesperson Patrick Chinamasa, after publishing investigations into corrupt dealings surrounding government procurement of COVID-19 personal protective equipment (PPEs) from a dubious company, in which he fingered those linked to the country’s first family.

Shortly after that, he was to be arrested three times, beginning July 2020 (and, the most recent being only a few days ago), on charges ranging from inciting public violence, obstruction of justice, and now publishing or communicating false statements prejudicial to the state – of course, he has not been convicted on any of these, neither has he been arrested on whatever charges Chinamasa and his ZANU PF were threatening him of.

Legally, neither Zimbabwe, nor South Africa, can ‘rein in’ any journalist, or anyone else for that matter, for merely questioning and criticizing the actions of, whether its own or foreign, government and leadership. There is no such law in any truly democratic state.

Therefore, for ZANU PF to blackmail the ANC into ‘reining in’ Mokoena, and the broader community holding the government of Zimbabwe accountable to its people – we all would like to know exactly what the Zimbabweans are saying and expecting.

Are they, in fact, trying to force the South Africans to put through Sophie Mokoena, what they have done to Hopewell Chin’ono? Are they effectively bullying their southern neighbor into the politics of intimidation, persecution, and brutality that we in Zimbabwe have been subjected to for 40 years? That indeed, appears to be the case.