My family fled the country in the 1990s, but its cautious handling of the pandemic has made it feel safer than Britain, says Michelle Kambasha, who works in the music industry 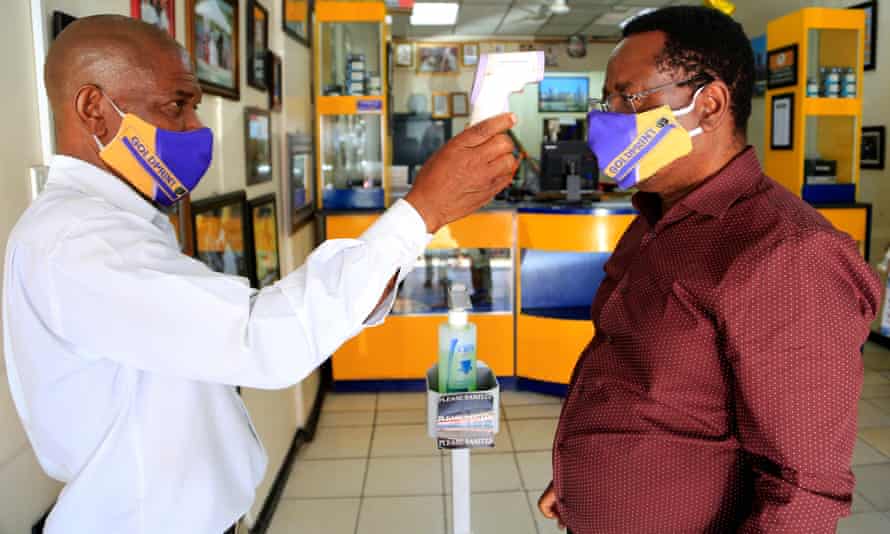 ‘Many African countries, scarred by previous pandemics, realised quickly that there was very little room for error, and did what they needed to do.’ A man has his temperature checked in a shop Harare, Zimbabwe, in October. Photograph: Aaron Ufumeli/EPA

When I tell white British people I’m going to Zimbabwe, I’m used to seeing two emotions quickly flash across their faces. The first is excitement and the second is fear. Who can blame them? Excitement and fear are how the continent of Africa has been painted for decades-long before malnourished children with flies orbiting the crowns of their head became a staple of charity appeals.

It’s not just British people who have been taught to feel this way. The political and economic upheavals of post-colonial Africa have even coloured how the colonised feel about their lives and their futures. Africa as a “basket case” is an idea that has infiltrated even Africans’ minds. But the truth is always far more complicated than any lazy stereotype can convey – and recent events have brought that home to me in dramatic fashion.

My family moved to England as economic immigrants wanting to make a better life for their children. The collapse of the Zimbabwean economy in the 1990s spelled the end of their time as freewheeling twentysomethings, raising a small child. So, in 1996, when I was four, we packed up. England offered education, amenities, healthcare and a stable government. As children of Rhodesia, where speaking English was mandatory, my parents’ language skills were especially good – they had been taught at the best schools in Salisbury (now Harare). This made their assimilation easier and quicker.

For years, we never looked back. At that time being Zimbabwean was particularly stigmatised and my parents would often deny their true nationality, opting instead for South African. In year six, I found myself at primary school with a white Zimbabwean. Testing the waters, I’d told her where I was really from, thinking we’d have something in common. But the ensuing discussion about white Zimbabweans being thrown off their farms on the orders of Robert Mugabe proved too contentious for my little 11-year-old brain, and for years afterwards I assumed my parent’s pseudo-South African identity.

As the political climate settled, so did our qualms. Ten years ago, we began going back to Zimbabwe every other Christmas. At first it was a culture shock. It’s not easy to readapt to a land that you know is yours, but somehow doesn’t feel like that.

That slight discomfort lingered. But flying to Zimbabwe this Christmas felt different. Yes, there was a pandemic on. For the first time, though, I was fully at ease.

Why? It’s no secret that England’s response to the coronavirus pandemic has been at best lacklustre and at worst fatal. Lockdown was delayed until it was too late, frontline workers were left without PPE, testing was woefully inadequate, among many other things. England alone has seen about 77,400 people die after contracting Covid – roughly the same as the entire continent of Africa. There are scientific and demographic reasons for this, sure – the population skews younger, and the weather can be less conducive to viral transmission. But that’s not the whole story. Because many African countries, scarred by previous pandemics, realised quickly that there was very little room for error, and did what they needed to do.

Under the tutelage of World Health Organization regional director for Africa, Matshidiso Moeti, governments like Zimbabwe’s did as much as they could. With her four-decade-long experience of containing outbreaks across the region, most infamously HIV, Moeti urged pre-emptive lockdown measures right at the beginning of the pandemic, conscious of the fragility of healthcare systems on the continent. Countries were encouraged to repurpose existing disease control operations. Moeti told the Financial Times that it’s “only when you get to know the communities that are affected that you can find the most effective way to intervene”.

The days ahead are undoubtedly going to be difficult. Infections have jumped recently, partly as a result of Zimbabweans returning from South Africa, where the new variant has been spreading rapidly, for the holidays. This is clearly a virus that is going to keep presenting us with new challenges, and no one has a magic wand to wave it all away. I was reassured, though, by the fact that the reaction to the rise wasn’t dithering and debate, but a swift 30-day national lockdown.

And while Boris Johnson proved his incompetence as a leader in crisis, I couldn’t help but be reminded of his comments about Britain’s former African colonies: “The problem is not that we were once in charge, but that we are not in charge any more.” Those words seem even more laden with hubris now than when they were written in 2002, especially as just before Christmas the UK faced potential food shortages and travel bans – the kind of chaos people normally associate with developing countries. I felt no schadenfreude, but as I sat on my flight to the relative safety of an African country, I considered whether there were some lessons in humility to learn among an elite that projected such confidence in its ability to mount a “world-beating” response to the virus.

While my friends in England acquainted themselves with tier 4 restrictions, my family had big plans. We stayed at a lodge just three hours outside Harare. Our temperatures were checked every day and all staff and visitors, without exception, wore PPE to ensure our safety. We went on a game drive and saw animals that many will never see in their lifetimes – impalas, lions, giraffes, zebras. We bonded with the lodge’s pet water hog, who most evenings we’d find splayed across the sofa closest to fireplace in the deepest, peaceful looking sleep. It was the first time since March that I’d felt safe.

Before Covid-19, going to Zimbabwe felt like an obligation to my ancestry. This time it felt like a luxury, and one that I’d know to never take for granted. It was like escaping a burning building into one that stood firm – at least for the time being. The irony of our reverse scramble to Africa wasn’t lost on us. In today’s Zimbabwe we found the exact opposite of what my parents had run away from in the 1990s. I overcame the naive embarrassment of being Zimbabwean many years ago but am left with guilt and anger at this inferiority complex that had been slowly embedded in me all these years. I wonder how long it will take to undo that.