New York, January 14, 2021 – Zimbabwe authorities should not contest freelance journalist Hopewell Chin’ono’s appeal, drop all charges against him, and ensure that he can work freely, the Committee to Protect Journalists said today. 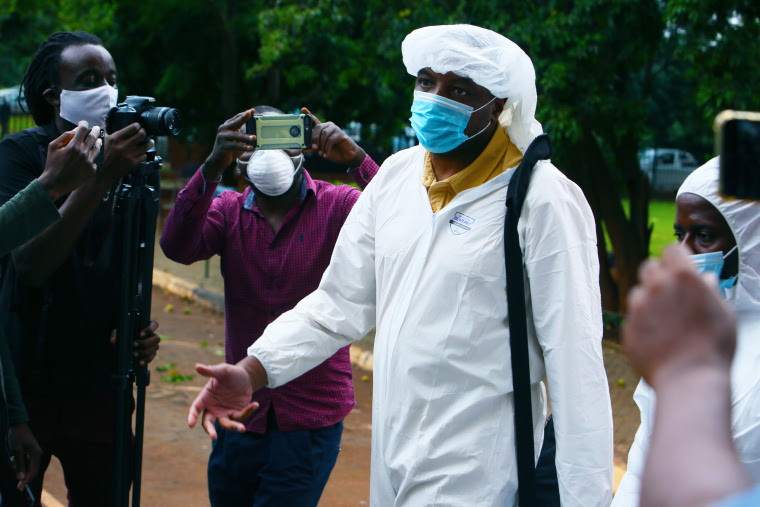 Zimbabwean journalist Hopwell Chin’ono arrives at the magistrates courts in Harare, Saturday, Jan. 9, 2021. On Friday, Zimbabwe police arrested the prominent journalist for the third time in six months. Chin’ono posted on his Twitter account that police had picked him from his house and said they were charging him with “communicating falsehoods.” (AP Photo/Tsvangirayi Mukwazhi)

Today, a magistrate court in Harare, the capital, denied Chin’ono bail, citing that the “state fears that he will commit other offences,” according to one of his lawyers, Harrison Nkomo, who spoke to CPJ via messaging app, and two tweets by Zimbabwe Lawyers for Human Rights, a local nongovernmental group of which Nkomo is a member.

Nkomo said that Chin’ono’s legal team intends to appeal that decision tomorrow, and that the journalist is next due in court on February 18.

Chin’ono was arrested on January 8 and charged with “Publishing or communicating false statements prejudicial to the State” for a tweet about alleged police abuse, according to Nkomo and CPJ documentation from the time.

“The decision to deny Hopewell Chin’ono bail and prolong his detention is yet another example of how far Zimbabwean authorities are willing to go in their attempts to intimidate and silence the press. We call on Zimbabwean authorities not to contest his appeal,” said Muthoki Mumo, CPJ’s sub-Saharan Africa representative, in Nairobi. “Unfortunately, Chin’ono’s arrest and detention fits into a regional trend of using false news charges to criminalize journalism. This trend must be reversed.”

Chin’ono had delayed applying for bail in order to challenge the constitutionality of that charge, which the court upheld on January 13, according to Nkomo, a hand-written statement from the journalist posted on Twitter, and a report by the local chapter of the Media Institute of Southern Africa. Nkomo told CPJ that the legal team intends to appeal the court’s decision on the constitutionality of that charge as soon as possible.

Chin’ono faced repeated arrests and harassment in 2020, according to CPJ research.