HARARE (Reuters) - Russia and China have approached Zimbabwe about supplying vaccines to tackle its escalating COVID-19 outbreak amid concern about Harare’s ability to afford the shots, with plans for meetings with business leaders who have offered to pay for them. 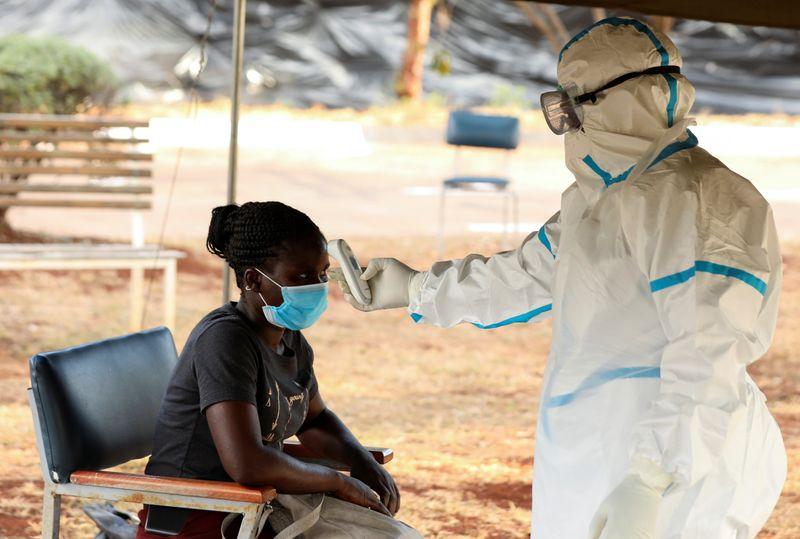 A woman has her temperature checked by a healthcare worker during a nationwide lockdown to help curb the spread of the coronavirus disease (COVID-19), at a mass screening and testing centre, in Harare, Zimbabwe April 30, 2020. REUTERS/Philimon Bulawayo

Authorities in the impoverished southern African nation are scrambling to contain the accelerating spread of the coronavirus. Infections have doubled in just the past few weeks and three government ministers have died in the last 10 days.

Zimbabwe doctors’ groups say that hospitals are quickly filling up with COVID-19 patients and cite an increase in the number of infected people dying at home, unable to afford the steep fees charged by hospitals.

Authorities are now trying to establish whether a more infectious South African variant of the virus is circulating in Zimbabwe, fearing it may have entered when thousands of citizens living in South Africa returned home for the December holiday.

Portia Manangazira, a director of epidemiology and disease control in the Health Ministry, told a parliamentary committee that China and Russia were among those that had approached Zimbabwe to offer supplies of their COVID-19 vaccines.

“They have near pre-qualified vaccines and those are going to be for sale…they might offer a small donation,” Manangazira said without elaborating.

Zimbabwe has recorded a total 31,320 coronavirus cases and 1,005 deaths – more than half reported since the beginning of this year, data released late on Sunday showed.

Zimbabwe is also in contact with the World Health Organization’s COVAX scheme set up to deliver shots to poor and lower-income countries. Harare hopes to use COVAX to inoculate about three million Zimbabweans – or 20% of the population.

The COVAX scheme is due to roll out next month, amid growing criticism of vaccine inequity from both the WHO and others as wealthy countries inoculate millions of people using shots procured through bilateral deals.