Staying home means starvation for many Zimbabweans, and those forced to work face police raids and dwindling custom 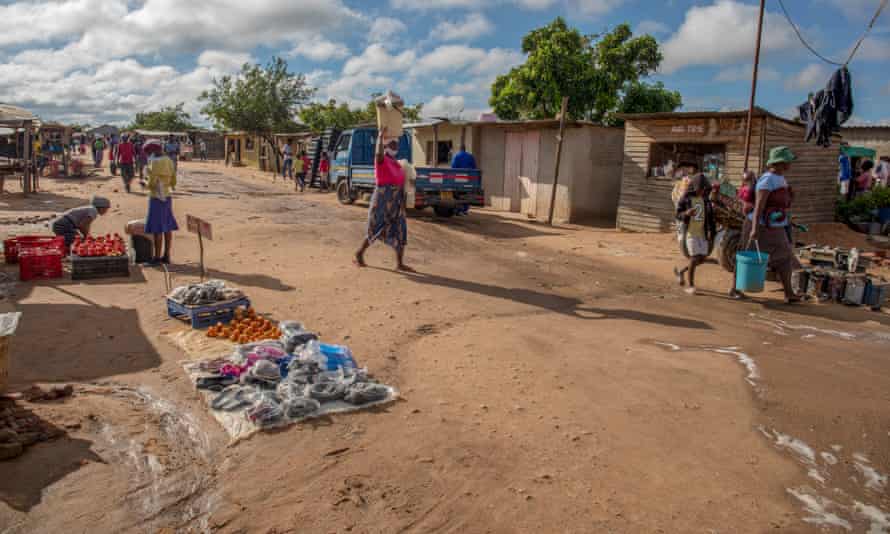 Pammula Chiunya, 68, is sitting under an open-sided shed outside a makeshift beer hall in Hopley settlement, six miles (10km) west of Zimbabwe’s capital, Harare. She is not happy.

Chiunya serves roasted chicken heads in a twist of old newspaper to a visibly drunk man, then settles to wait for someone else to emerge from the shebeen, which is crammed with animated revellers dancing to loud music. Customers are elusive, even with her prices: four heads for a dollar.

“On a very good day, I could make $2.50, but sometimes people do not have money to buy so I end up having chicken heads for dinner before they get bad,” says Chiunya.

Zimbabwe may be in lockdown but shebeens in Hopley defy the ban on bars opening and sell beer alongside cheap but potent illicit alcohol, exacerbating the poverty in the households of the mostly jobless men who buy it.

Their defiance is, however, a lifeline to Chiunya and her roasted chicken heads. Her customers are sometimes polite and sometimes rowdy: some eat her food and then refuse to pay.

The beer hall is a difficult enough spot, but officers policing lockdown often raid her little stall and demand bribes, making it even more difficult to earn anything from her day’s work.

It breaks my heart to hear my grandchildren complain of hunger, yet I have nothing to give them

“The police are constantly raiding us and we pay bribes to continue working. I am left with nothing most of the times which means I must start over again. We do not dispute that Covid-19 is real but our livelihoods have been destroyed and we cannot recover. They should at least allow us to work because staying at home is not an option,” Chiunya says.

Chiunya, a widow, looks after her five orphaned grandchildren. With so many mouths to feed, she has to work hard to provide for them all, and eats very little herself.

“We eat porridge in the morning and sadza [maize meal] in the evening. This is all we can afford. It has never been a burden to take care of my grandchildren, but this time it has become very difficult,” she says.

“I am thinking of asking some of my relatives to take at least the two younger ones. It breaks my heart to hear them complain of hunger, yet I have nothing to give them.”

Before the lockdown, Chiunya used to spend her days in central Harare, selling secondhand clothes, but all those stalls have been closed and cleared away.

“Although things were tough, I could at least provide a decent meal for my grandchildren and send the three younger ones to school. If schools open now, I do not know if the children will be able to resume,” she says.

Thousands of families live in squalor in Hopley, a settlement founded in 2005 after former president Robert Mugabe’s Murambatsvina – the notorious “Operation Clean-up” that pushed more than 300,000 of Harare’s poorest people out into the scrublands around the capital.

To compound the poverty, Hopley does not have running water or a sewer system. Families survive on brick making or street vending, while some are tempted into petty crime, and girls as young as 14 have been abused in prostitution.

Those, such as Chiunya, who are finding it tough under lockdown have often sought help from local nongovernmental organisations that were providing small cash handouts. But much of the money has dried up.

“There is a donor who has been gracious to families here, but I have never received any money,” says Chiunya.

Outside her home, Natasha Tafirenyika, 18, a mother of two, is making a fire to cook the day’s single meal. Her two-year-old daughter has been crying for porridge, she says.

Tafirenyika was recently laid off from her job as a house help. Her employers feared she would bring Covid-19 into their home. “I have nothing to support my two children, that job is all I had. At least I could give my mother some money to buy food here at home but all that is gone. Covid has taken away my livelihood,” she says, as she stoops to fan the flames.

“My hope is in God, we have no idea how we are going to survive another two weeks under lockdown, it is painful,” she says.

A drive through Hopley and other areas around Harare reveals a picture of desperation, with people who were already on the margins having to defy lockdown to scratch a living.

In Zimbabwe, the informal sector provides employment for 85% of the working population. People say that staying at home would mean starvation at a time when the country remains without a plausible plan for a vaccination scheme.

Last week, Zimbawe’s vice-president, Constantino Chiwenga, extended the lockdown by another fortnight, after an initial 30-day period that included a dusk-to-dawn curfew.

Zimbabwe has been recording a growing number of Covid cases since the Christmas holidays owing, most believe, to unregulated movement of people in and out of the country.

Last week, the country’s Covid-19 death toll breached 1,000 and several government ministers have died from the virus. There is widespread public panic about the country’s ability to deal with the pandemic.

But for the poor, there is little choice when their livelihoods remain on the streets.