In my life, I have come across my fare share of strange things - some, which could be characterized as stranger than fiction - but, the open letter allegedly penned by former MDC Alliance member and senator Lillian Timveos to her erstwhile leader, Nelson Chamisa, as she excitedly celebrated her newfound home within the ruling ZANU PF, is arguably the most laughable piece of writing that I have had the misfortune of laying my eyes on. 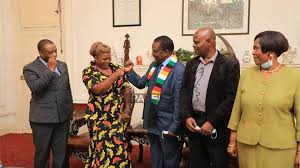 I found it so hypocritical, deceptive, and insincere, that it prematurely forced me out of my self-imposed temporary recess from writing, as I felt needed to recharge my batteries, after a spell of ill-health – but, I guess Timveos managed to quick-charge them for me!

As much as nothing in it is of much surprise – as it merely mirrors the nature of politicians, who are hypocritical, self-serving, and who would say and do practically anything to fulfil these myopic and insincere objectives, including saying the most ludicrous things on the face of the planet – however, this missive by Timveos takes the trophy.

If anyone is to take whatever she tried to sell as fact seriously, one would ask, “In spite of all the grave myriad accusations she made against her former party, the MDC Alliance – which include fraudulent and chaotic internal elections, imposition of candidates, violent tendencies, intolerance of divergent views, a confrontational approach, power-hungry tendencies, and destabilization of the country’s economy – just how different is that to what her new preferred political party, ZANU PF, had been practicing for the past 40 years?

Just how democratic is ZANU PF and the national elections it has presided over? Just how peaceful is the party that killed hundreds of Timveos’ former party’s members – in addition to the tens of thousands butchered during the Gukurahundi genocide?

Just how tolerant are they of divergent views, especially considering the numerous human rights, labour, and opposition activists arrested on spurious charges, and have never been convicted in a competent court of law, whilst others have reportedly been abducted, beaten up, and left for dead, simply for expressing divergent views, speaking out for workers, or standing up against high level corruption?

Which party has caused the most divisions in this country – pitting Ndebele against Shona speakers, whites against blacks, and polarized the nation on partisan basis – leading to untold hatred and violence

Which party has had so many internal divisions, such that a whole nation was held at ransom, as one faction (with the aid of the country’s military) staged a coup d’etat in November 2017, in order to remove a rival faction?

Which party has been so confrontational as to use the various arms of state to destroy the main opposition party, instead of engaging in proper, free, and fair political contestation?

If Timveos genuinely believes that ZANU PF, under president Emmerson Mnangagwa, credibly won the 2018 harmonized elections, and sincerely desires to rebuilding the country, why did she continue staying within the MDC Alliance for over two and half years after the elections?

She witnessed all the destructive and retrogressive things she has accused the MDC Alliance of being engaged in, yet never moved an inch.

She watched the MDC Alliance relentlessly “criticizing the ZANU PF government, without coming up with any tangible or practical solutions” to the country’s challenges – something she now appears to find unacceptable – yet, she was comfortable being in the opposition party all these years.

The MDC Alliance refused to be part of POLAD since its inception two years ago – a decision she regards ill-advised – yet, she stayed.

If ZANU PF has had an “impeccable track record”, and “has the interests of the people at heart” – as she claims – what has she been doing in the opposition MDC Alliance all these years, when the ruling party was supposedly establishing “community driven projects”?

As a matter of fact, was her newly found love, ZANU PF, not the ruling party of the last 40 years – ever since the country attained independence from Britain – and, presided over the demise of the once “Jewel of Africa”, by turning it into an embarrassing basket case, through rampant corruption, and gross mismanagement and incompetence?

Thus, forgive me if I find it extremely difficult to make the correlation between the failed Zimbabwe economy, and the party that she has just dumped, and now blames for “destabilizating the country’s economy”!

If there is anyone who needs some “self introspection”, then it appears the author of this ridiculous letter needs to seriously look herself in the mirror.

All her letter managed to achieve was to expose her as nothing more than an unprincipled hypocritical political charlatan, who is swept by any opportunistic winds that come by her.

Timveos needs a “paradigm shift in the way she conducts business if she is to be relevant in the Zimbabwe political arena” – just to paraphrase her own words.