HARARE – Two sub-editors have been suspended at tabloid H-Metro following the publication of a reader’s comment saying dancehall superstar Soul Jah Love, who died on Tuesday, should have lived and a top leader of Zanu PF died instead. 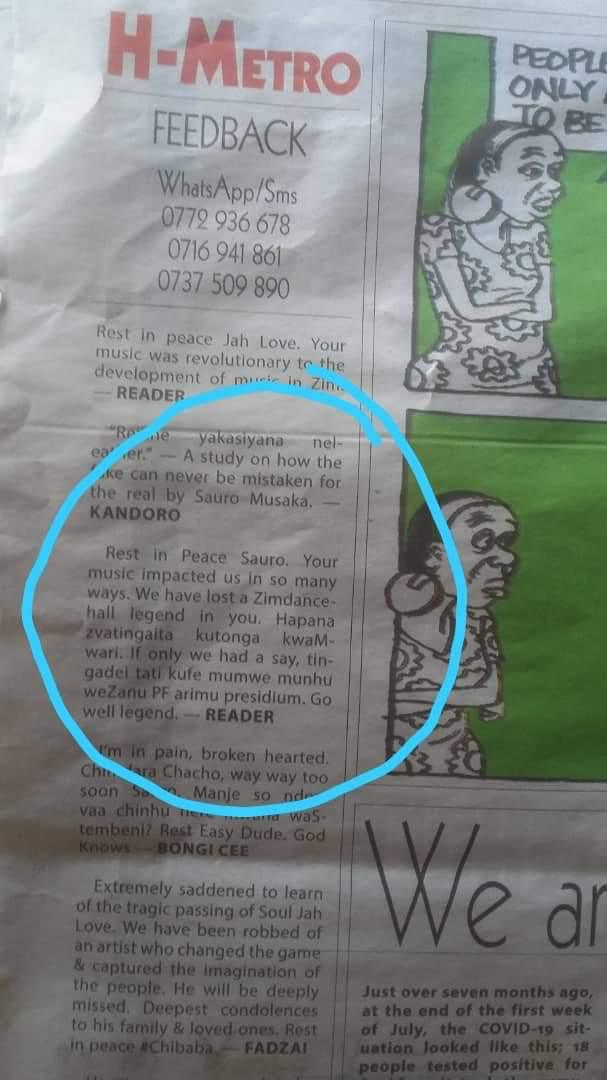 Chief sub-editor Washington Rungano Gwanzura and sub-editor Tinashe Chuma were served with their suspension letters on Friday, as the state-owned newspaper – part of the Zimbabwe Newspapers Group – apologised in a tweet.

The letters, signed by production editor Rosenthal Mutakati, said the duo was suspended for 14 days without pay and benefits “pending further investigations.”

“In the meantime, please be advised that you are barred from setting foot at Herald House until the investigations are completed,” Mutakati wrote.

In its Feedback column on Friday, H-Metro carried a comment allegedly lifted from Twitter, which said: “Rest in Peace Sauro. Your music impacted us in so many ways. We have lost a Zimdancehall legend in you. Hapana zvitangaida, kutonga kwaMwari (there is nothing we can do, it’s the will of God). If only we had a say, tingadei tati kufe mumwe munhu weZanu PF arimu presidium (… we would have said someone in the Zanu PF presidium should die). Go well legend.”

According to Mutakati, the comment was lifted by Chuma – who was doing the page layout – from Twitter.

Gwanzura as the chief sub editor, Zimpapers charges, should have picked up the comment and removed it.

A Zimpapers insider told ZimLive that the readers’ page, which also carries the comment, is overseen by deputy editor Charles Mushinga.

“Mushinga sent the material for the page to the subs, but when the layout was being done the sub editor Chuma discovered that he was short on the feedback normally sent by readers over WhatsApp. That’s when he went on Twitter and found that tweet, which in the rush to clear the page he probably didn’t read fully,” the source said.

In a tweet, H-Metro’s editor Lawrence Moyo said: “In our February 19, 2021, edition of H-Metro, we erroneously published feedback from someone wishing death upon ‘someone in the presidium’. The error is regretted. We apologise sincerely to the Presidium and all our readers for this error and for any inconveniences caused.”