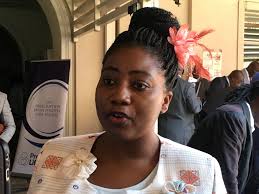 The activists are victims of persecution by prosecution and their ordeal at the hands of the State is clear testimony to the weaponization of the judiciary.

We note with great concern that the State continues to use judicial capture as a weapon to victimize dissenting voices in the country.

Mamombe, Chimbiri and another MDC Alliance activist, Netsai Marova were subjected to torture and sexual abuse by state security agents when they were arrested in May 2020 after protesting against the failure by the State to provide essential services to citizens following the outbreak of the Covid 19 pandemic.

Following this ordeal, the trio spent 17 days in detention.

Currently, Mamombe and Chimbiri are languishing in remand prison after they were arrested in early March 2021 for addressing journalists at the Harare Magistrates Court.

On April 23, 2021Mamombe was forcibly removed from hospital where she had gone for medical attention. Prison authorities claimed they had been given instructions from above.

The Crisis Coalition Gender Committee is perturbed by the fact that judicial capture has led to violation of citizens’ fundamental rights  enshrined in the country’s constitution.

In the case of Mamombe, the State continues to defy Section 50 of the country’s constitution on the rights of arrested and detained persons.

The State has also used pretrial detention as a weapon to punish dissenting voices and this is evidenced by the fact that in most cases involving bail applications by incarcerated activists, the High Court has often pointed out to a miscarriage of justice on the part of the lower courts.

We implore the State to uphold citizens’ fundamental rights and desist from weaponization of the judiciary to clampdown on opposition activists.

An independent judiciary is a critical component of a democratic society and we condemn the State’s overbearing influence on the judiciary.

We are further concerned that the State continues to use brute force in response to genuine calls for reforms by concerned citizens.

As the Crisis in Zimbabwe Coalition Gender Committee, we will use all appropriate legal means to challenge judicial capture and hold the State to account on rights violations and we call upon progressive Zimbabweans to compliment our efforts.