Zimbabwe’s MDC Alliance needs to realise that despite the huge support it received at the polls in 2018, it must regain the status of a mass movement and recruit civil society as a partner in ‘winning the streets’. 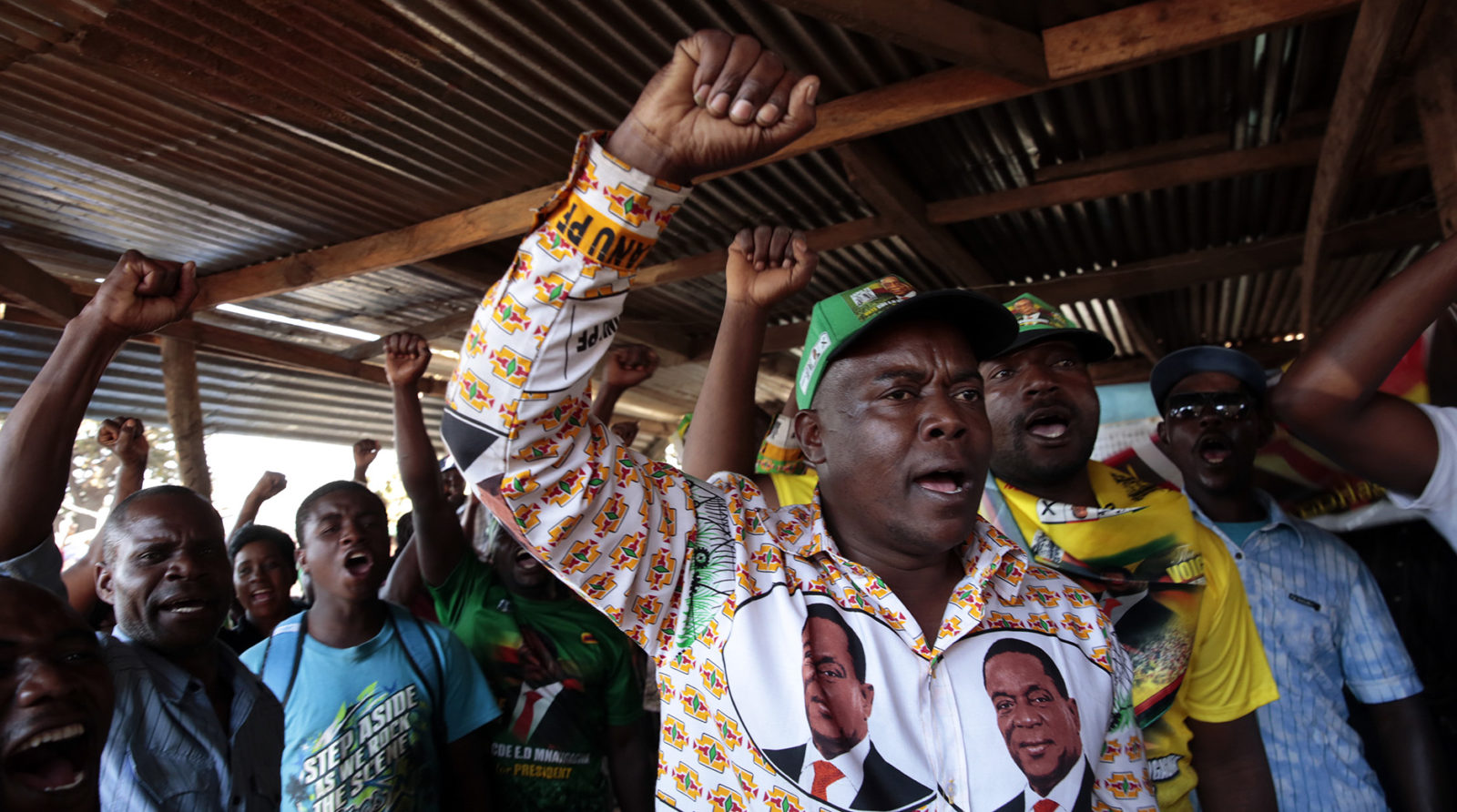 “You never win at the negotiating table what you have not won on the streets.” — Union leader Zwelinzima Vavi.

It was pointed out five years ago in Zimbabwe, while former president Robert Mugabe was still alive, that there is no way forward other than a transitional arrangement — a national transitional authority — to avoid a hard landing and a possible coup. Both have now occurred.

We had a coup in November 2018 followed by a very hard landing in the form of an increasingly coercive government — one that is incapable of reform, either politically or economically.

Turning the country around will require a concerted effort, nationally, regionally and internationally.

It has been argued that Zimbabwe has reached another Lancaster House moment, requiring a similar response to the ongoing crisis. Apart from the Covid-19 pandemic, there is a serious insurgency in Mozambique, a creaking South African economy that can ill-afford mass migration, and, in the middle, Zimbabwe’s political and economic stasis.

SADC claims that there is no crisis in Zimbabwe that requires mediation. Unfortunately, this is yet another of the conflicting positions which the regional and international communities have taken on the country. It is not a view shared by South Africa, which sent envoys and a high-level ANC delegation to Harare in 2020 — both of which expressed the view that there is indeed a crisis in Zimbabwe.

Increasing human rights violations and corruption demonstrate that the government of President Emmerson Mnangagwa is unable to undertake the kinds of reforms that would allow the country to re-enter the international arena, and most importantly find a way to solve the major obstacle to obtaining international finance — paying off its debts.

It is clear that until Zimbabwe pays its debts there will be no substantial economic re-engagement. Yet the country will be unable to do this without reforms that guarantee human rights, the rule of law and an end to rampant corruption.

While the government has ignored a report published earlier in 2020 on the activities of criminal cartels, the report did raise questions in the international community about the possibility of re-engagement.

The Zanu-PF government appears to be placing its bets on one of two possible strategies to remain in power. These strategies are linked, depending on how the game plays out.

When it comes to Zimbabwe, the international community insisted on free and fair elections. This was the condition for accepting the “coup”, and it has backfired badly. Legitimacy is always sacrificed on the altar of the minimum of legality conveyed by an election — just look at Uganda.

When there can be no de jure legitimacy, de facto will always do. Stability is the primary concern for the international community– just look at Myanmar.

Zanu-PF, and especially Robert Mugabe, always understood this: a bad election is way more acceptable than no election.

The first strategy of the ruling party is therefore to continue to dismember all opposition forces, political and civic, to ensure that it will be the only major political force able to contest an election in 2023.

The recall of all the genuinely elected MPs of the MDC Alliance (most recently Tendai Biti) and their replacement by unelected appointees of minority proxy political parties, is central to this strategy.

Through the demolition of the MDC Alliance — cutting it off from financial support and creating multiple contestants for its political base — Zanu-PF has a forlorn hope that it will need neither coercion nor rigging to win the election in 2023.

The second strategy is predicated on the economy and the probability that it will be unable to turn the economy around, forcing it into discussions about political settlement. This is seen in the obstruction of any form of national dialogue other than the Political Actors Dialogue (Polad), the denigration of church initiatives, increasing attacks on civil society, and the desire to promulgate new draconian legislation such as the Patriot Bill.

The crude intention is that any dialogue forced upon Zanu-PF will face a divided and disorganised rabble on the other side.

However, the political reality in Zimbabwe is simple.

On one hand, there is the securocrat state with coercive power, but no political base other than that delivered through corruption, patronage, clientelism and now ethnic division in its own ranks.

On the other hand, while Zanu-PF can claim “legality” through its contrived support, the MDC Alliance can claim legitimate support from its genuine political base as well as from those who will vote against Zanu-PF — a huge, negative vote.

Thus, the implications of this polarised situation are straightforward: Zanu-PF cannot win a genuine election if bona fide reform of the state takes place. Its two-fold strategy is to prevent any substantial reform, block a genuine national dialogue, hope to survive until elections in 2023, and be prepared to be the strongest at the negotiating table if they cannot hold out that long.

How do democrats respond?

The democratic strategy to counter this should be equally straightforward. It requires a national demand for mediated political talks that are not controlled by Zanu-PF, a demand that will allow a regional and international response. This is the point made recently by Zimbabwean academic and activist Ibbo Mandaza in the pages of Maverick Citizen.

This requires the MDC Alliance, in particular, to give up the notion that it can fight Zanu-PF as a parliamentary party — that it has a mandate to represent all the strands of opposition because of it being a political party that stood in the 2018 elections.

The recall of 120 of its genuinely elected legislators must surely tell the party that there must be another way than endlessly relying on a rigged electoral system.

It requires the MDC Alliance to realise that the huge turnout in support for the party in 2018 (despite intimidation and Zanu-PF vote-rigging) came from those who support it and from those who simply refuse to vote for Zanu-PF.

The MDC Alliance must regain the status of a mass movement and recruit civil society as a partner in “winning the streets”.

Let’s be clear what Zwelinzima Vavi meant. “Winning the streets” does not mean protests and demonstrations, per se. It means bringing the masses together in clear, articulate and consistent demands — exactly what is missing from all the chatter about dialogue.

Demanding dialogue requires there be an intention, an end goal. It is not open ended, but has to have a rationale accepted by the people as a whole. For example, the single most important demand in the late 1970s was one person, one vote: without this, nothing could have changed in Rhodesia.

The only coherent end goal must be a transitional arrangement that will undertake the kinds of reforms that arrest the decline, reform the state, create the conditions for an eventual election whose result cannot be contested by the loser if it is found to be acceptable regionally and internationally.

This solution has been evident for five years now.

If the MDC Alliance is courageous enough to take this step, it will become part of the solution and not part of the problem in Zanu-PF’s manipulations. It will join churches, labour, the women’s movement, the youth and the citizens in forcing change.

Furthermore, if the demands from this broad front are articulate and specific, there will be a focus for mediation and Zanu-PF will have to consider dealing with a national response rather than a range of inarticulate requests for dialogue, which they happily dismiss in favour of the discredited Polad process.

It is definitely time for opposition political parties and civil society to come up with a national response to a national crisis: the ordinary, deeply suffering citizens of Zimbabwe deserve no less.

It is also time for the region and the international community to unite in a cohesive push for a mediated settlement. This needs to be supported by SADC, which also needs to admit that Zimbabwe is patently not adhering to the SADC Treaty.

Where, for example, is the adherence to the principles of human rights, democracy and the rule of law (Article 4 (c))? And what about a government that implements policies that undermine the principles and objectives of SADC (Article 33 (1) (b))?

Finally, during the dark years of apartheid, Zimbabwe stood in solidarity with the people of South Africa. The Zimbabwean people ask no less of South Africa today. South Africa must follow up on its very tentative steps from 2020 and honour its unfulfilled promise to return to help find a solution. DM/MC

Tony Reeler is co-convener of the Platform for Concerned Citizens. He is a Senior Researcher (formerly Director) at the Research and Advocacy Unit, an independent institution specialising in human rights, transitional justice and governance.  A former academic at the Universities of Malawi [1978-1980] and Zimbabwe [1982-1992], he was founding director of the Amani Trust [1993]. He has been active in civil society and national politics since the 1980s.