The High Court of Zimbabwe has ruled that Chief Justice Luke Malaba’s five-year extension term of office by President Emmerson Mnangagwa is illegal. 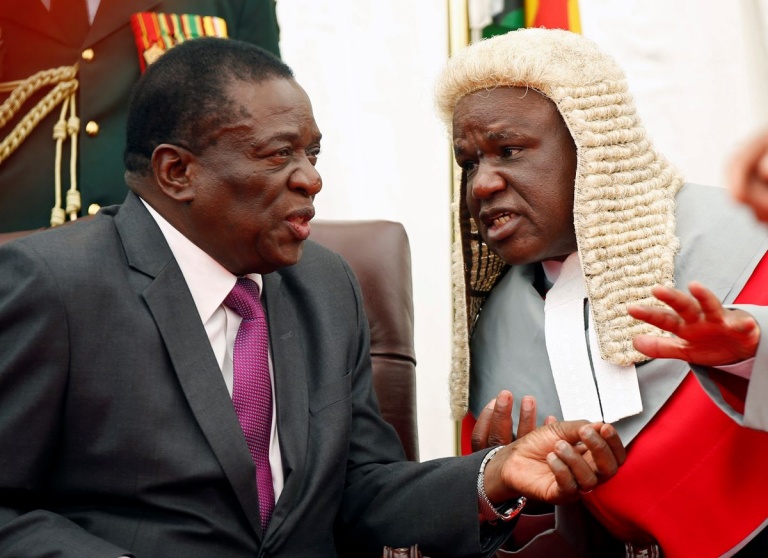 Zimbabwean President Emmerson Mnangagwa talks to the Chief Justice Luke Malaba during the swearing in ceremony of the country’s vice presidents at State House in Harare, Zimbabwe, on December 28, 2017. REUTERS/Philimon Bulawayo

Delivering the ruling, High Court judge Justice Happias Zhou said the extension of the time provided for in Section 186 of the Constitution does not apply to the Chief Justice and any sitting but not acting Judges of the Supreme Court and Constitutional Court.

The judges made the following observations: “In view of the decision that we have reached, Honourable Malaba ceased being a judge and Chief Justice at 0000hrs on 15 May 2021,” he said.

“If the sitting judges could benefit it would infringe Section 328 as it was not put to a referendum And in terms of the Constitutional Judge, the term of office is determined by age only.”

Advocate Tendai Biti, who was among the legal counsel that opposed extension of Malaba’s tenure said the Deputy Chief Justice Elizabeth Gwaunza would replace Malaba.

Through the Constitutional Amendment Number 2 Act, Mnangagwa on Wednesday extended Malaba’s term of office by an additional five years.

He accepted Malaba’s election to continue in the office of Chief Justice beyond 70 years on the pretext that he is still mentally and physically fit to continue in office. Nehanda Radio