The National Transitional Justice Working Group (NTJWG) notes with concern that a plaque that was unveiled at the Bhalagwe mass grave site in Kezi, Matabeleland South Province on 25 May 2021 was stolen. 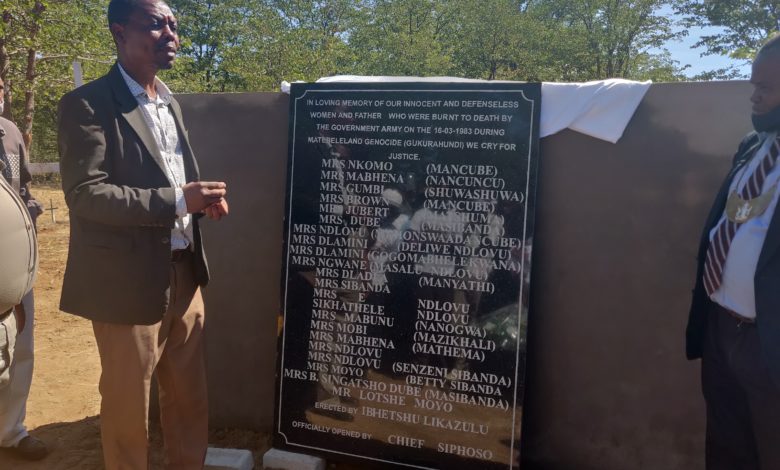 Chief Siphoso (left) of Tsholotsho stands next to a plaque erected in honour of 8 people who were killed during Gukurahundi at Emkonyeni village in 1983.

The unveiling was done during a memorial service held in memory of all the people who tragically lost their lives during the Gukurahundi era which was a series of massacres of thousands of civilians carried out by the Zimbabwe National Army from early 1983 to late 1987. The plaque was unveiled by Chief Fuyane with the support of Ibhetshu Likazulu, an NTJWG stakeholder that pursues justice for victims of Gukurahundi.

The NTJWG condemns this theft and views it as an attack on the memory of the estimated 20 000 people who lost their lives during Gukurahundi, their families and survivors who continue to grapple with the trauma of this excruciating period. This theft is particularly concerning as it is the second incident of this nature with the first having occurred in 2018 when a similar plaque at Bhalagwe was destroyed. Back then, villagers consisting of victims, survivors, and families of victims of Gukurahundi atrocities were threatened and warned against participating in erecting similar structures. These incidents are indicative of intolerance and a deliberate effort to rewrite history by erasing the lived experiences of victims and survivors.

Memorial sites and structures such as this are a key part of truth recovery and preservation through memorialisation initiatives. Given Zimbabwe’s history of violence and conflict, memorialisation is an urgent and pertinent issue that must be prioritised. Gukurahundi is part of Zimbabwe’s history which though heinous must not be forgotten. Plaques such as the one unveiled at Bhalagwe are important reminders of what happened in the past which must fill every Zimbabwean with a desire to play their part to guarantee non-recurrence of human rights violations such as Gukurahundi. Therefore, this theft is an unacceptable act that undermines the nation’s efforts to realise national peace, reconciliation, and healing and it must not go unpunished.

The NTJWG, therefore, stands with the people of Kezi, Ibhetshu Likazulu and other victims of Gukurahundi in condemning this act and calls on all Zimbabweans to take a stand against the destruction of memorial sites and structures. The NTJWG specifically calls upon the National Peace and Reconciliation Commission (NPRC) to launch an investigation into the destruction of the plaque and hold the perpetrators of this callous act accountable. Furthermore, the NTJWG implores the NPRC to provide the people of Kezi with counselling services and any other necessary support as this incident has likely re-traumatised them.