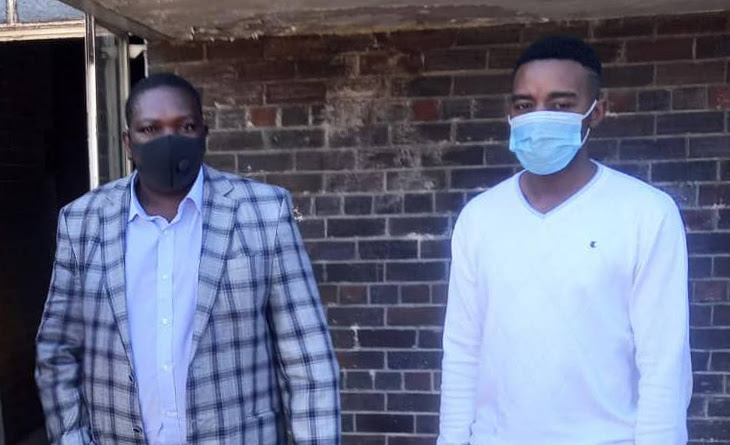 Zim Morning Post editor Elias Mambo (left) and reporter Farai Machamire (right), are seen after they were questioned by police and charged with criminal insult in Harare, Zimbabwe, on May 14, 2021. (Photo: Elias Mambo)

On May 14, officers from the Law and Order section of the Central Police Station in Harare, the capital, summoned Zim Morning Post editor Elias Mambo and reporter Farai Machamire for questioning, according to news reports, Mambo, who spoke to CPJ via messaging app, and tweets by Zimbabwe Lawyers for Human Rights, a rights organization that provided the journalists with a defense lawyer.

Authorities charged both journalists under Section 95 of Zimbabwe’s Criminal Law (Codification and Reform) Act of 2004, relating to criminal insult, and released them after questioning, Mambo said. If convicted, they could face up to one year in jail or a fine of 60,000 Zimbabwean dollars ($186), or both, according to that law and the 2021 standard scale of fines.

Kudzayi Kadzere, the journalists’ lawyer, told CPJ via social media yesterday that police were continuing to investigate the case. He said that the criminal insult charge was similar to Zimbabwe’s defamation section in its criminal code, which was repealed in 2016 after it was declared unconstitutional.

“Zimbabwean authorities must drop the criminal charges against Zim Morning Post journalists Elias Mambo and Faria Machamire immediately, and should scrap all criminal insult laws from their books,” said Angela Quintal, CPJ’s Africa program coordinator. “Zimbabwe’s constitutional court ruled that criminal defamation was unconstitutional in 2016; now is high time for the authorities to expand that logic to criminal insult laws.”

The Zim Morning Post is a news website that publishes investigative stories and also covers general news including politics, sports, arts, and entertainment.

The charges stem from a March 3 complaint filed by Temba Mliswa, an independent member of parliament from the town of Norton, in which he said the outlet had tarnished his image, according to the complaint, which Mliswa posted on Twitter.

The complaint referenced a February 1 article published by the Zim Morning Post, written by Machamire,  in which a woman who claimed to have been in a relationship with Mlisawa said that he wanted to become president and also made comments about his sex life.

CPJ called and texted Mliswa for comment, but he did not respond. In his tweets posting the defamation complaint, he said that the article was “based on falsehoods” and alleged that Mambo and Machamire were released from custody due to their political connections.

Mambo told CPJ that the charges were “an assault on media freedom and unnecessary harassment of journalists.”

“Those who hold positions of authority should never be allowed to abuse state resources as journalism is not a crime,” he said, adding there was no need to attack the messenger “when the person [the interview subject] sending that message is on record.”

He added that Zim Morning Post had published an apology to Mliswa on March 3 for failing to give him an adequate chance to reply to the interview before it was published. Mambo said the outlet kept the original interview on its website because the subject stood by her claims.

Mambo said he believed that apology, issued after Mliswa complained to the self-regulatory Voluntary Media Council of Zimbabwe, had resolved the issue. He noted that Mliswa had tweeted positively about it and said “one must move on,” and therefore he was shocked by his arrest and the criminal charges two months later.

CPJ called Zimbabwe police spokesperson Paul Nyathi for comment, but the call did not go through; he did not respond to an email seeking comment.