BULAWAYO – Justice minister Ziyambi Ziyambi launched into an angry outburst accusing judges of capture by “foreign forces” to tarnish and “destabilise the “second Republic” on Saturday after a High Court judgment blocking the extension of Luke Malaba’s term of office as Chief Justice. 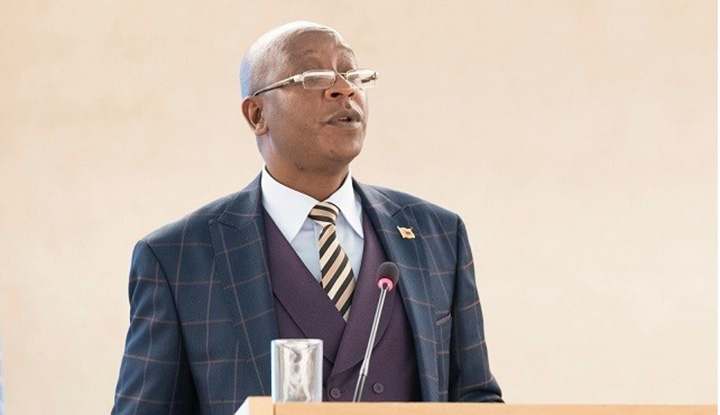 While recklessly impugning the entire judiciary, Ziyambi took particular aim at Justice Zhou for allegedly being an anti-Mnangagwa judge and Judge President George Chiweshe, who is viewed suspiciously as an ally of vice president Constantino Chiwenga, wondering why Chiweshe was not cited in the lawsuit.

“I want to make it clear today that we do not accept the decision of the High Court. We have a serious situation of a Judiciary that has been captured by foreign forces in this country,” the justice minister blasted without holding back.

Ziyambi said there were “elements both within and outside Zimbabwe” who wanted to “destabilise the second Republic”.

He called for the “transformation of the Judiciary”, a euphemism for packing the courts with pro-Zanu PF judicial officers after “various decisions that have been made by a certain group of Judges which are meant to tarnish the second Republic.”

Ziyambi accused the three judges of “judicial overreach”, adding “as Government, we are not going to accept that. This is [a] clear violation of the doctrine of separation of powers – the Judiciary should know where it ends.”

The justice minister also slammed Justice Zhou for refusing to recuse himself after the Judicial Service Commission argued the High Court judge had “material and significant [personal] interest in this matter”.

“How does one Judge … continue to make decisions that are against the Government? In the eyes of the Judge, does it mean that the Government is always wrong? And how are cases allocated at the High Court? Why does a certain group of Judges including that Judge continue to be allocated cases in which the second Republic is involved in?” Ziyambi wondered, accusing Justice Zhou and his peers of political mischief.

“We are also at a loss as to how the Honourable Judge President of the High Court [Justice Chiweshe] was excluded from being cited in the litigation which included all Judges of the High Court who have acted in the Supreme and Constitutional Courts.”

Ziyambi said the government was “further alarmed that these proceedings went on through the night up to midnight [early Saturday], disparaging the hearing as a “typical case of a night court, consisting of night judges and night lawyers.”

“I must also mention and make it very clear that we are aware of multi-lateral and foreign organisations who have poured in a lot of money through the Zimbabwe Lawyers for Human Rights to capture various state institutions and to destabilise the Government,” he charged.

The opposition MDC Alliance wasn’t spared: “We are also aware of certain members of the opposition, the MDC Alliance, who are being paid monthly allowances for causing turmoil in this country and for being arrested.”

Ziyambi vowed chillingly that time had “come to expose all these malcontents and economic saboteurs who are not sleeping until they bring down the second Republic. We are now going to poke the enemy in the eye and confront it.”

Ziyambi received pushback from lawyers, opposition officials, and human rights defenders who accused him of intimidating the judiciary.

“The unrestrained fury with which ED’s Minister of Justice has reacted to the judgment of the High Court on Malaba’s term of office not only constitutes contempt of court but also evidences panic and confusion in the face of a rare setback to its authoritarian consolidation agenda,” said Welshman Ncube, MDC Alliance vice president, and constitutional lawyer.

He added: “Malaba’s legacy is one of presiding over the development of an unprecedented authoritarian and cruel jurisprudence while administering the judiciary with a headmaster’s iron fist which has made him universally unpopular within the legal profession and beyond.”

And Alex Magaisa, legal expert and law lecturer at Kent University in England said: “Take a look at the vitriolic attack on the High Court judges and in particular Justice Zhou. Clearly the threats of “transformation” of the judiciary are attack on independent judges. This is the reaction of a wounded regime. But this happened because of incompetence.”

COMMENTS BY THE MINISTER ON HIGH COURT DECISIONS 15 5 21