Zimbabwe is tangled in a debate on how to manage the increasing wildlife-human conflict while avoiding an ecological disaster and respecting animal rights. 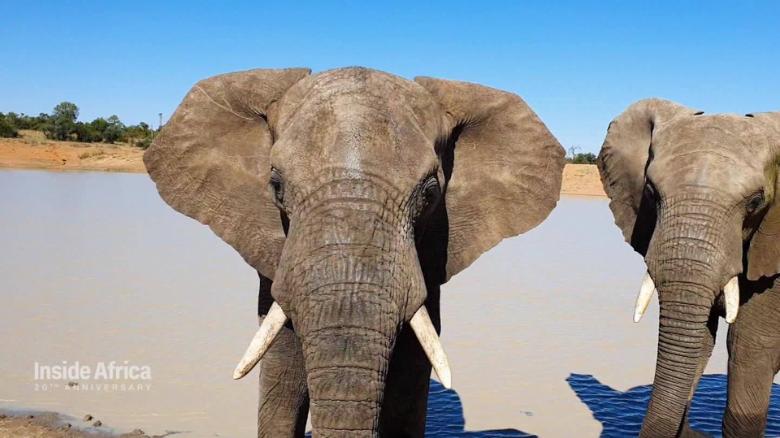 Anna Maswani, a 30-year-old mother of three, is recovering at Zimbabwe’s main referral hospital after being severely attacked by an elephant in the Kariba area, some 280 km north of the capital Harare. Although chances are high that she would be disabled for life, Maswani counts herself lucky because many others who fell victim to such human-wildlife conflicts did not live to share their harrowing stories.

Last year alone, wild animals – most of them elephants – killed more than 60 people in Zimbabwe. In the first three months of this year, 20 people had been killed, while 26 others had been injured in these encounters.

Because of her experience, Maswani joins millions of other Zimbabweans who express great hate for these “gentle giants”.

Research has shown that upto 95 percent of Zimbabweans living in areas close to wildlife zones harbour bitterness towards elephants because of these attacks, the destruction of their crops and the razing down of their homes and other properties that they now suffer with increasing frequency.

As a result of these cases, the communities are unwilling to participate in any wildlife conservation efforts and 88 percent of them indicated that they would support the reduction of elephant numbers.

As the clamours for the reduction of elephant populations grow – coincidentally when the International Union for Conservation of Nature (IUCN) has just upgraded the African elephants to the Red List of Threatened Species because their numbers on the continent are fast dwindling – the dilemma that the government of Zimbabwe faces is how to reduce its crushing elephant population, which now numbers about 100,000, in a way that does not draw the ire of animals rights activists, most of whom – unlike Maswani and others – raise the clarion call from the comfort of their own far away countries.

In early May, the government of Zimbabwe stirred a hornet’s nest when it revealed that it was seriously considering conducting an elephant cull, not just to mitigate against human-wildlife conflicts, but also to avert an ecological disaster that results from having a large concentration of these jumbos in a small area.

“We are trying to see ways in which we can reduce the numbers. We have to discuss it at policy level as government,” Mangaliso Ndlovu, the Environment, Climate, Tourism and Hospitality minister, said in an interview with a State-owned television channel. “Options are on the table, including culling,” Ndlovu added without giving any further details.

The nearly 100,000 elephant population is more than twice the country’s carrying capacity of 45,000. As a result of their large numbers, the elephants severely degrade the environment, much to the detriment of other wildlife and vegetation species and with disastrous ecological ramifications.

Experts state that when it comes to managing elephant populations, the options are limited to three: culling, translocation and birth control.

The use of contraception to slow down elephants’ birth rates is a long-term option that has been used in countries such as South Africa. While translocation (which has been conducted in Zimbabwe in the past) is preferable, it entails high costs of capturing and transporting the animals to remote areas. With the simultaneous increase in both human and wildlife populations, even if the funds were available, these remote areas no longer exist.

This relocation strategy is also not without opponents. In the past, Zimbabwe has exported baby elephants, a move that caused a huge uproar. In December, Namibia –  another African elephant range state facing the challenges associated with a huge elephant population – also caused anger when it announced the auctioning of 170 elephants to any buyers who could take better care of them.

Zimbabwe killed more than 50,000 elephants in five previous culls that took place in the 23 years between 1965 and 1988, and other African countries such as Zambia, South Africa and Uganda have also resorted to this unpopular method before.

Culling involves mass killing of the targeted animal group, sometimes in very huge numbers, something that infuriates animal rights activists. In the case of elephants, entire family groups, or herds, are killed to prevent post-traumatic stress for surviving animals.

“The only way to manage elephant populations by culling is to take out entire herds,” Rob Lurie, chairman of the Zimbabwe Professional Hunters and Guides Association was quoted as saying. “It’s not an easy task and would require a lot of manpower and financing to be done correctly.”

The debate around this emotive issue is usually heavily laden with propaganda, as both sides try to weaken the validity of each other’s arguments.

Last year, while trying to paint a vivid picture of how “dire” the situation has become, Tinashe Farawo, the spokesman of Zimbabwe Parks and Wildlife Management Authority, went to the extent of giving figures that turned out to be more of wild exaggerations.

However, official statistics reveal that at its Independence in 1980, Zimbabwe’s population was about 7.4 million and it had only doubled to around the current 16 million, not the alleged 15 folds.

On their part, animal lovers are quick to share dubious research findings that, in some cases, treat Africa – a continent of 54 independent and separate countries – as just one entity in order to obfuscate the reality that the 415,000 elephants said to be still surviving on the continent are not spread evenly across this continent, as more than half of these elephants are found in only two countries: Zimbabwe (100,000) and Botswana (roughly 130,000). This gives rise to the unique issues raised by members of the African elephant range states.

It is such elements of dishonesty, exaggeration and gross propaganda on both sides that appear to always work against efforts to find common ground between the two opposing camps.

The Centre for Natural Resource Governance (CNRG), a local non-governmental organisation, argues that elephants are peaceful animals and that the increasing attacks on people result from the fear that builds up in them due to stress-inducing human activities such as poaching, trophy hunting and mining within the game parks.

“Whilst elephants are generally peaceful animals, they retaliate if a member of their family is attacked, killed or injured,” the centre noted in a statement protesting the announcement that 500 elephants would be trophy hunted in Zimbabwe this year.

“Elephants move as herds and they defend and protect each other like any other animal species that live as families. Killing one elephant has serious repercussions and can cause huge emotional distress to the entire herd. Whilst trophy hunters, armed with guns, are well trained and also enjoy extra protection from rangers and evacuate after their temporary hunting escapades, it is the locals who bear the brunt of wildlife vengeance. The locals do not have anything to defend themselves with when elephants attack.”

CONCERNS OVER ELITES’ GREED AND CORRUPTION

Some point out that even if these huge numbers were true, and the culling, trophy hunting and ivory trade are allowed to for these African elephant range states, the proceeds from these wildlife “harvests” are never ploughed back into conservation efforts, but end up lining the pockets of greedy political elites.

Culling, it is argued, would only serve to whet the appetite of these elites for more wildlife products. The same argument of corruption surfaces when it comes to mobilising resources for elephant translocations.

Peter Borchert, an independent commentator, publisher and conservationist argues that while he finds trophy hunting unpalatable as a concept and in practice, within the broader context of Zimbabwe’s conservation dilemma, it is hard to punch holes in the rationale behind the sale of hunting licenses or to suggest any other immediate options for generating the funds required for Zimbabwe’s cash-strapped parks.

“Zimbabwe’s elephant numbers seem to add further weight to the argument for the sale of hunting licenses,” Borchert wrote recently.

“Furthermore, the record of African governments regarding corruption and transparency leaves a lot to be desired. And Zimbabwe is amongst the worst – it ranks joint 160th out of 180 countries in the 2016 Transparency International Corruption Perceptions Index. So, the question must be asked: will the $50 million-plus that might accrue from the killing of 500 elephants go towards vital conservation priorities, or will much of it find its way into the foreign bank accounts of a powerful few?”

IS CULLING NECESSARY AND JUSTIFIED?

The debate on culling has been dragging on for decades now. In a 2002 article in which he examined both sides of the elephant population debate, Patrick Tom concluded that in the case of Zimbabwe, elephant culling is “necessary and justified.”

“Animal welfarists who take the extremist position that all culling is immoral over-emphasise sentiency at the expense of other considerations, such as human well-being and the need to conserve other animal species,” he wrote. “However, conservationists should not totally ignore animal welfarists’ concerns and ensure that elephants do not suffer unnecessarily during culling exercises. Elephant culling in Zimbabwe is, thus, necessary and justified provided those who cull the animals take care to spare them any unnecessary suffering.”