After an arrest for Sikhala court solidarity 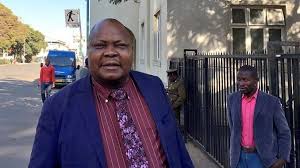 TERRENCE Manjengwa, an acquaintance of Zengeza West legislator Hon.
Job Sikhala is having the proverbial “last laugh” after two Harare
Magistrates recently set him free by removing him from remand on
charges of disorderly conduct and dealing or possession of prohibited
knives.

Manjengwa and Tanyaradzwa Ziwaira, who were represented by Webster
Jiti of Zimbabwe Lawyers for Human Rights (ZLHR), were arrested on 24
August 2020 at Harare Magistrates Court and charged with disorderly
conduct as defined in section 41(a) of the Criminal Law (Codification
and Reform) Act while attending the court session for Hon Sikhala and
were accused of singing a protest song denouncing the incarceration of
the opposition party legislator.

However, Harare Magistrate Tendai Muchini recently removed the two
from remand after the State failed to avail witnesses for trial to
commence.

Manjengwa has also been removed from remand on charges of dealing or
possession of prohibited knives as defined in section 39 of the
Criminal Law (Codification and Reform) Act.

Prosecutors had claimed that he had been searched on 24 August 2020
while at Harare Magistrates Court and found him in possession of a knife.

But Harare Magistrate Charity Maunga set him free after a State
witness, who is a police officer failed appear in court to testify
against Manjengwa.

Manjengwa, Changara and Gura, who all reside in Harare were arrested
on 3 September 2020 outside Harare Magistrates Court while following
proceedings for Hon. Sikhala, who had been arrested and detained on
charges of inciting public violence by urging people to participate
during the 31 July
2020 protests.

The trio was charged with unnecessary movement during the national
lockdown as defined in section 4(1)(a) of the Public Health (COVID-19
Prevention, Containment and Treatment) (National Lockdown) Order
Statutory Instrument 77/2020.

But on Wednesday 2 June 2021, Magistrate Mateko upheld the trio’s
application for exception and quashed the charge of violating national
lockdown regulations.

Manjengwa, Changara and Gura, who are represented by Kossam Ncube of
ZLHR, return to court on Friday 25 June 2021, where their trial on
charges of possession of offensive weapons at a public gathering as
defined in section 43(1)(a) of the Criminal Law (Codification and
Reform) Act emanating from their arrest on 3 September 2020 is
scheduled to commence.