MARANGE-Child marriages prevalent in remote Marange cannot be tackled by a single approach but require a multi-pronged approach, the Zimbabwe Lawyers for Human Rights (ZLHR) has learnt. 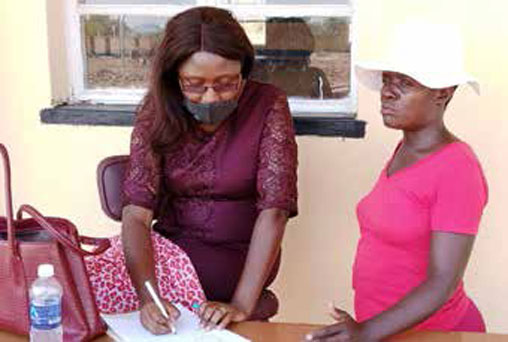 This came out during a Mobile Legal Clinic (MLC) outreach and training, conducted by ZLHR and Zimbabwe Human Rights Commission (ZHRC) in Marange recently.

Attended by councillors, village health workers, care givers, traditional leaders, religious leaders and villagers from Dhaisi, Mafararikwa, Seri, Pamhidzai, Nzvenga and Chaangira village, the training sought to come up with possible solutions to the scourge that bedevils this remote community.

Besides educating parents, religious and traditional leaders who sometimes base these marriages on faith and culture, ZLHR learnt there was need for girls to be mobilised and capacitated to determine how they want their future to pan out.ZLHR noted traditional and religious leaders in these areas were the most important in terms of promoting change. A buy-in from them was a welcome development.“Early and forced marriages are driven by multifaceted issues and challenges. The approach to ending it must likewise be multipronged.

This means engaging all relevant sectors, including education, health, sexual and reproductive health and rights and economic empowerment or poverty reduction. Child protection and gender equality should provide the foundation for all interventions,” reads ZLHR’s report after the meeting.“There is need to mobilise the children, especially girls, so that they have the capabilities to determine their own futures, especially choices about if, when and whom they marry,” ZLHR said.“The programme must be evidence-based and child-centred. Multi-level approaches empower girls with the information, skills and services they need to be healthy, educated and safe, helping them make a successful transition to adulthood,” ZLHR’s report stated.

A mapping of the area indicated girls are dropping out of school and being married off at a very early age with cases of poverty, domestic violence on a steady rise.ZLHR added: “Daughters are sometimes married off to reduce their perceived economic burden and their bride price is used by families as a means of survival. Girls from Zimbabwe’s poorest households are more likely to marry before the age of 18 than girls living in the richest households. Many dropout of school because their parents cannot afford to pay school fees, which in turn puts girls at a higher risk of being married off,” ZLHR said.

“Members of the indigenous apostolic church reportedly encourage girls as young as ten to marry much older men for “spiritual guidance. Men in this church are reportedly entitled to marry girls to shield them from pre-marital sex, with girls becoming second or third wives in polygamous marriages. If a girl engages in pre-marital sex, is seen with a boyfriend or returns home late, she is sometimes forced to marry to mitigate the shame. Some who fall pregnant choose to enter customary marriages because they are afraid their family will abuse them for dishonourable behaviour,” said ZLHR.

It has been noted that there is an inherent imbalance of power in these relationships, which is often linked to domestic violence.

In addition to the physical danger this presents to women and girls, violence can also have lasting psychological implications on girls’ and women’s mental health.“Women married as children have, on average, lower levels of education than those who marry after the age of eighteen, trapping them in a cycle of poverty, vulnerability to domestic and sexual violence and poor health outcomes,” said ZLHR.