Antibiotic resistance is a natural phenomenon that happens when bacteria develop the ability to defeat the drugs designed to kill them.

The germs change over time, no longer responding to medicines thus making infections harder, and sometimes impossible, to treat. This, in turn, results in higher health care costs for both individuals and governments. “Preventing and controlling antibiotic resistance calls for a multi-pronged approach, of which vaccines is one”, says Dr Stanley Midzi, WHO Health Systems Strengthening Advisor.

What was the problem?

In recent decades, Zimbabwe has experienced large outbreaks of antibiotic-resistant strains of both cholera and typhoid.

Typhoid fever is a highly contagious bacterial infection that can spread throughout the body, affecting many organs. Without prompt treatment, it can cause serious complications and can be fatal. A large typhoid outbreak (with more than 3000 suspected cases) between October 2017 and February 2018 was caused by an antibiotic (ciprofloxacin)-resistant strain. This meant that the first-line antibiotic of choice to treat typhoid (ciprofloxacin) was no longer effective – the bacteria had become resistant to the available antibiotic.

“In the recent past, Zimbabwe has been affected by a number of typhoid outbreaks, with cities like Harare, Bulawayo and Gweru often becoming the epicenters due to chronic poor hygiene practices in an environment with chronic shortage of clean water supplies and compromised sanitary facilities (WASH)” says Zimbabwean Vice President and Minister of Health and Childcare Hon Dr Constantino Chiwenga.

Zimbabwe then experienced a large cholera outbreak between September 2018 and March 2019. Cholera is another bacterial infection that causes severe diarrhoea and dehydration, which can advance to shock and seizures. If not treated immediately, cholera is fatal. The outbreak was caused by a Vibrio cholerae strain that was found to be highly resistant to nearly all antibiotics.  The outbreak strain had 14 additional antimicrobial-resistant (AMR) genes carried on a plasmid. This prompted the government to declare a state of emergency.  To deal with the outbreak, it was necessary to change the patient management guideline from the cheaper fluoroquinolone antimicrobial, ciprofloxacin, to a more expensive macrolide called azithromycin.

Both of these outbreaks were a real-life demonstration of the consequences of increasing antimicrobial resistance in Zimbabwe — increase in healthcare costs, mortality and morbidity, and decline in  productivity and quality of life.

Actions taken to try to solve the problem

“The problem demanded action on all fronts”, says Dr Raiva Simbi, Acting Director Laboratory Services, at the Ministry of Health. In this context, the introduction of typhoid and cholera vaccines became a critical public health intervention.

Water, sanitation, and hygiene (WASH) improvements, health education and use of antimicrobials were all used as outbreak control measures during the typhoid and cholera outbreaks. In order to curb the devastating effects of the typhoid outbreak, Zimbabwe carried out a mass typhoid Vi-conjugate vaccine (TCV) vaccination campaign from February to March 2019 in nine suburbs of Harare that were severely affected by the outbreak.  This campaign targeted children aged between 6 months and 15 years in communities affected by the 2018 to 2019 outbreak. Over 318 000 doses were administered to those aged 6 months -15 years.

During the same period, over 1.5 million people received the cholera vaccine in 17 affected urban suburbs of Harare to manage the highly resistant strain of Vibrio cholerae.  “Access to safe water, adequate sanitation and hygiene remain the mainstay of typhoid and cholera prevention and control in the long term”, said Dr Chiwenga. In the absence of adequate WASH infrastructure, vaccines become an even more important tool to prevent and control infection in general and, in turn, prevent resistance to antibiotics and antimicrobials. However, improvements to WASH are costly and can take decades to implement.

What has been the change?

At the end of May 2021, Zimbabwe’s Ministry of Health and Child Care embarked on a 10-day multi-antigen vaccination drive aimed at children aged between 9 months and 15 years. The campaign was  supported by the World Health Organization (WHO), Gavi, the vaccine alliance and the United Nations Children’s Fund (UNICEF) and was the first of its kind in the African Region.

The success of the emergency vaccination campaigns as an outbreak control strategy was instrumental in getting TCV included in the routine national vaccination schedule. 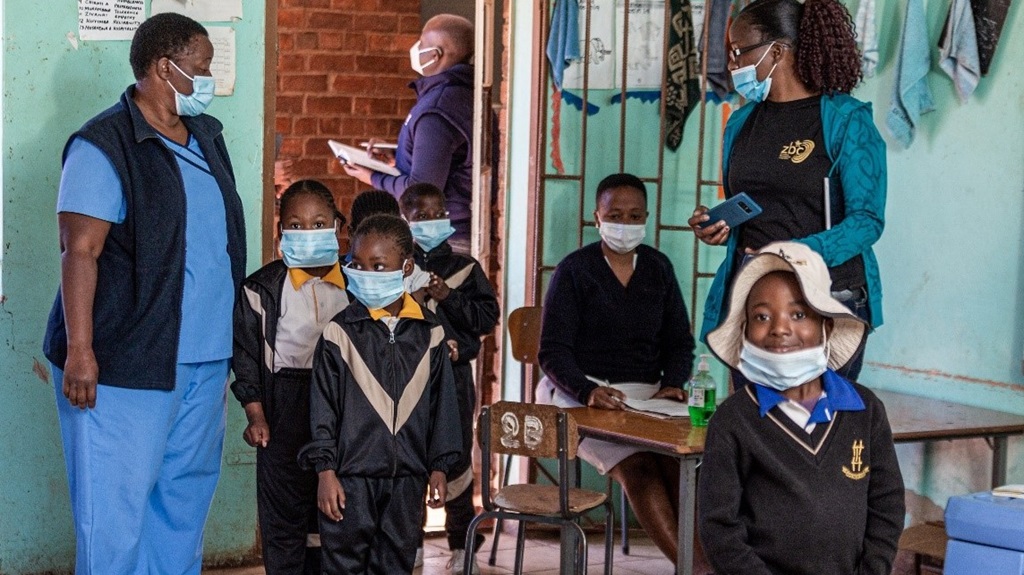 This initial 10-day vaccination drive saw more than four million children vaccinated against typhoid. The campaign has since been extended in a bid to reach a final target of just under six million children. The vaccine has also been successfully added to Zimbabwe’s routine immunization schedule.

“To build more evidence on the impact of vaccines on antimicrobial resistance, the Ministry of Health and Child Care will conduct a 2-year cross sectional study to assess the trends in antibiotic consumption prescribed for typhoid cases before and after incorporation of TCV into the routine immunization programme and perform genomic sequencing to characterize  circulating strains before and after mass immunization using the Multi-Partner Trust Fund (MPTF) and Fleming fund support” says Tapfumanei Mashe, National AMR Coordinator at the Ministry of Health and Child Care.

“To fight antibiotic resistance, we must use all the tools in the box. There is no single magic bullet, but vaccines are one of those tools” says Dr W Nyamayaro, Chair of the AMR Core-Group. “Vaccines are an effective tool to decrease the number of infectious diseases. They directly reduce the need for widespreadantibiotic use and thus prevent the emergence of resistance to antibiotics. We have a great One Health AMR team, which can lead the way out of this crisis – if we all work together”.

“The Typhoid Conjugate Vaccine is a significant step towards addressing the high rates of typhoid in children in Zimbabwe, and the Zimbabwean government deserves credit for successfully incorporating it into its routine immunization programme,” says Dr Alex Gasasira, WHO Representative to Zimbabwe. “We are proud to be able to support them in their efforts.” Dr Gasasira also noted that Zimbabwe’s introduction of the TCV through an integrated campaign realized the strategic priorities of the Immunization Agenda 2030, launched in 2020 by WHO, UNICEF and Gavi.

However, this story also points to the urgent need to increase investment in strengthening WASH infrastructure at community and healthcare facility level. This would be a more sustainable solution to preventing outbreaks of diseases such as cholera and typhoid. In addition, this story illustrates the cross-cutting nature of addressing antimicrobial resistance  – in this particular case, the need for strengthened WASH and strengthened routine immunization.

Finally, WHO has developed the AMR Action Framework Annex to the Immunization Agenda 2030. This includes a strategy to articulate the role of vaccines against AMR, a technical annex to the Immunization Agenda 2030, and an action framework that describes a vision for vaccines to contribute fully, sustainably and equitably to the prevention and control of antimicrobial resistance by preventing infections and reducing antimicrobial use.