Although there is no reliable data, with an estimated 4 to 7 million people living outside of the country, Zimbabwe has one of the highest per capita rates of net migration in the world. Zimbabwe is also home to an estimated 207,000 migrants from neighbouring countries such as Malawi and Mozambique. 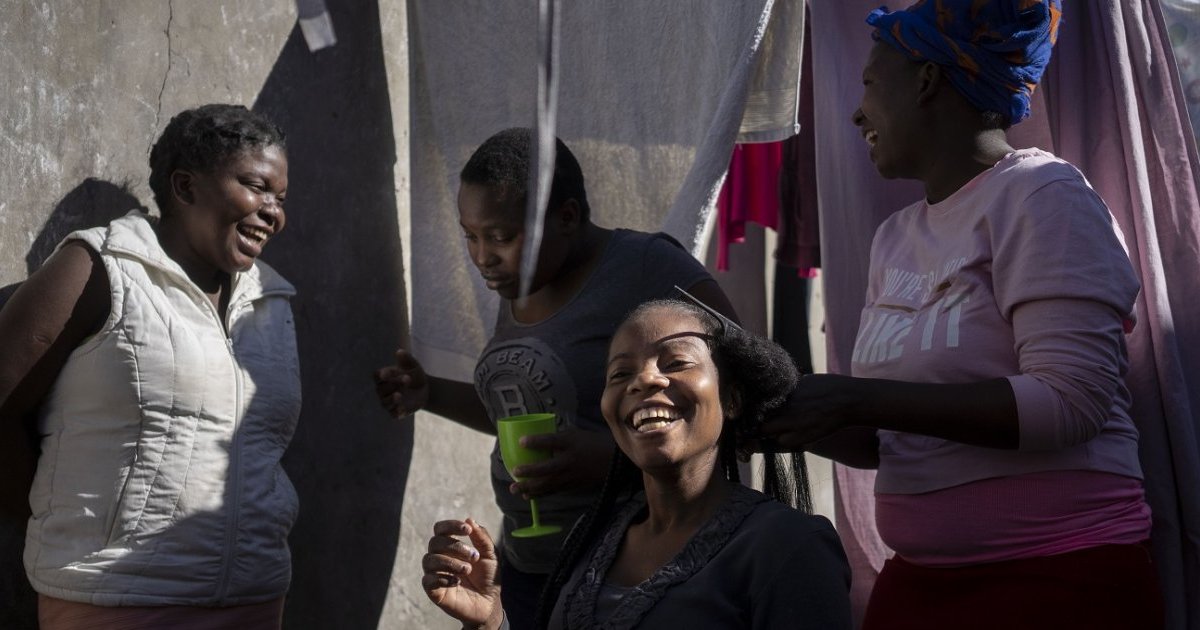 Fellowship Mukanhairi, the daughter of a Zimbabwean migrant, has her hair styled in the courtyard of their building in Johannesburg, South Africa on 16 April 2020. Many foreign nationals living and working in South Africa have been hit hard by the coronavirus pandemic, especially the country’s lockdown measures which forced all but essential workers to remain indoors.

Over the course of the pandemic, Zimbabwe’s migrant workers have faced various challenges, particularly as many of them work as essential workers or have irregular migration status, which means no access to sick pay, healthcare or any kind of social protection. “In other cases, they were among the first to be retrenched due to their economic status as migrants,” says Maria Ribeiro, the resident coordinator for United Nations Zimbabwe.

As a result, over 180,000 migrant workers from Zimbabwe have returned home with the assistance of the International Organization for Migration (IOM) since the start of the Covid-19 pandemic, according to Ribeiro. But in order to better support migrant workers – both those from Zimbabwe living and working abroad and those from other countries living and working in Zimbabwe – the government of Zimbabwe launched its inaugural National Labour Migration Policy (NLMP) in June this year.

“The National Labour Migration Policy for Zimbabwe is designed to improve the governance of labour migration, as well as the protection and empowerment of migrant workers. It also seeks to ensure that migration contributes to Zimbabwe’s socioeconomic development,” writes Paul Mavima, the Minister of Public Service, Labour and Social Welfare in a foreword to the policy document.

As a country of origin, transit and departure, the NLMP is anchored in the need to promote sound labour migration governance in Zimbabwe and the wider SADC (Southern African Development Community) region.

It also seeks to recognise the economic contributions made by migrants through remittances and knowledge transfer. Zimbabweans working outside of the country remitted a record figure of US$1 billion in 2020, according to Bloomberg, compared with US$635.7 million in 2019. It is a figure that makes remittances the second-biggest source of foreign-exchange earnings after platinum exports.

Although it was only launched this year, the policy was first developed in 2019 in response to the adoption of the Global Compact for Safe, Orderly and Regular Migration by UN member states. Before then, “Zimbabwe did not have a comprehensive national labour migration strategy. Whilst significant work had been done in regional advocacy and the establishment of social protection schemes, the transnational and national migration protocols and local policies in place were inconsistent,” says Fadzai Nyamande-Pangeti, a representative of IOM Zimbabwe.

In the NLMP document, IOM Zimbabwe also says the launch of the policy will support a cohesive approach to labour governance, whilst providing the strategic framework to ensure that all migrants workers are protected and that both sending and receiving communities benefit from migration.

The next step according to Naome Chakanya, a senior researcher at the Labour and Economic Research Institute of Zimbabwe (LEDRIZ), is the establishment of formal agreements between the government of Zimbabwe and the countries that receive Zimbabwean migrant workers. “We propose that the government of Zimbabwe should enter into bilateral and multilateral labour agreements or even Memorandums of Understanding with other countries to protect Zimbabwean workers that go and work in other countries,” she says. This will ensure that migrant workers have a legal framework to govern the contractual relationship between employers and workers, and that migrants have access to all the labour rights and provisions that apply to other categories of workers.

“In countries like the Philippines, their GDP is supported by the remittances that come as a result of these kinds of agreements so there are many positives that can come from them,” she says. Chakanya is also hopeful that additional agreements can come out of the NLMP, giving the example of separate bilateral and multilateral agreements to allow for the portability of social security benefits. This, she says, will enable migrant workers to make social security contributions while working in foreign countries, but at the same time ensuring easy transfer of those benefits when they return to their country of origin.

“What is also important is that when these workers go within the framework of an MoU or labour migration agreement, they could actually be free to also join trade unions in those countries and benefit from the training and services provided by those unions,” she says.

However, Chakanya notes that it is important that both sending and receiving countries regularly review the agreements to ensure that any gaps and grievances can be addressed.

The LEDRIZ senior researcher, who contributed to the formulation of the policy, says there is also still a need for Zimbabwe to strengthen its data collection around migration but that she is hopeful that the NLMP will allow the country’s statistics agency ZIMSTAT and the Ministry of Labour to amass important, reliable data on gender, profession, duration of stay, wages, salaries and working conditions.

“People are going to work outside the country irregularly because there are no formal agreements where we can trace how many people have gone to work, so this policy is one of the ways we can track the number of people we are sending out formally to other countries,” she says.

Zimbabwe Congress of Trade Unions (ZCTU) migration coordinator Michael Kandukutu says that while the labour migration policy is progressive, Zimbabwe still needs to ratify International Labour Organization (ILO) Conventions 97 on Migration for Labour and 143 on Migrant Workers Supplementary Provisions. This, he says, will not only allow for the smooth implementation of the NLMP but it will also help ensure the realisation of the 2030 Agenda for Sustainable Development’s labour migration-related goals and targets, as well as the implementation of the ILO’s Decent Work and Fair Migration agendas.

“The Zimbabwe government has not ratified ILO Conventions 97 or 143, which are both major labour migration governance instruments,” says Kandukutu. “The NLMP gives an opportunity for the government to domesticate and mainstream the provisions of these key instruments in the policy.”

He says migrants in and from Zimbabwe face various challenges, such as access to justice, food insecurity, xenophobia, stigmatisation, forced returns when one is adjudged to have changed migration status, and wage theft.

“The policy will enhance the engagement between countries of origin, transit and departure. It is our view, therefore, that with the launch of the NLMP, we will see a combined systematic approach by all social partners in improving safe, orderly and voluntary migration,” says Kandukutu.

Labour advocates are also calling on the implementation to pay close attention to the needs and challenges of the most vulnerable categories of migrant workers such as care workers and domestic workers.

“Care workers work in a variety of settings and across formal and informal economies. Even for those in formal jobs and with better economic opportunities, the impact of Covid-19 has been severe. Many of them work in frontline roles supporting the Covid-19 response efforts in the countries where they are based. This has meant them working extra hours, in stressful environments and with greater exposure to Covid-19,” says Nyamande-Pangeti of IOM Zimbabwe.

Muchaneta Takawira (not her real name) works as a live-in carer in London where she has lived since 2019. Despite having a bachelor’s degree in sociology and gender development, 51-year-old Takawira could only find employment in the care sector. It is difficult, low-paid work, made much worse by the pandemic. She describes working as a carer during the first and second waves of Covid-19 as “very scary”.

The UK’s adult care sector was hit hard by shortages of staff and protective personal equipment putting frontline workers, their families and the elderly and vulnerable people in their care at great risk. “But I had no choice but to keep working so that I can fend for myself and send money to my family back home.”

It is Takawira’s experience that migrant care workers, especially those from outside of the European Union, often experience exploitation, having to work longer hours for less pay than their UK colleagues. While the NLMP may take some time to implement, for Takawira and millions of others like her, a robust policy framework to promote good labour migration governance cannot come a moment too soon.