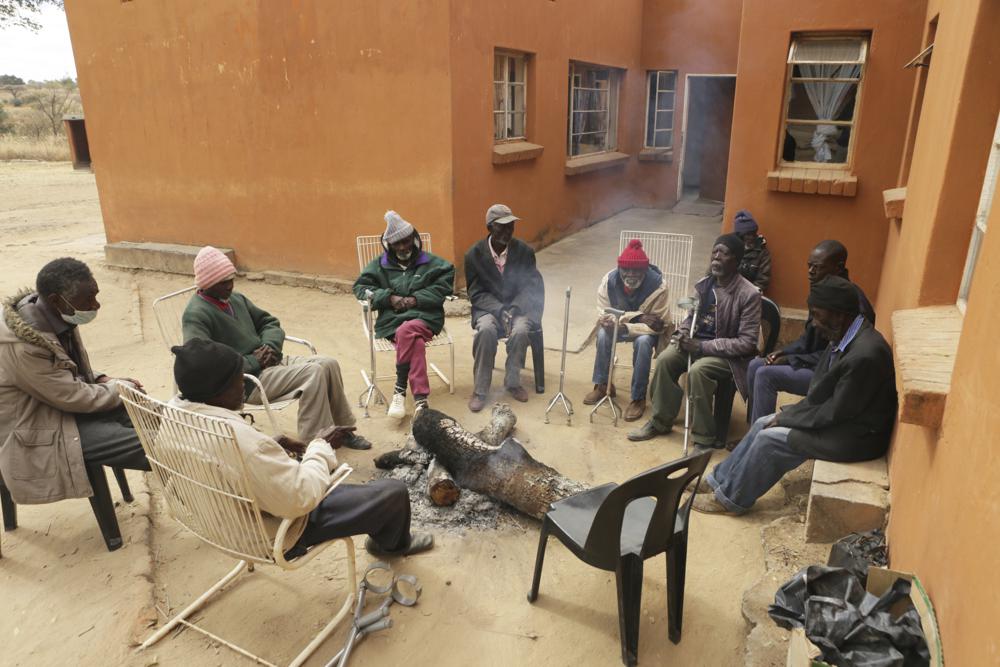 Elderly men gather around a fire at Melfort Old People’s home on the outskirts of Harare, Zimbabwe, Sunday, July 25, 2021. The economic ravages of COVID-19 are forcing some families in Zimbabwe to abandon the age old tradition of taking care of the elderly. Zimbabwe’s care homes have experienced a 60% increase in admissions since the outbreak of the pandemic in March last year. (AP Photo/Tsvangirayi Mukwazhi)

Just a week after arriving at the facility, Rodrick Bhatare, in his 90s, said he felt a bittersweet moment at the celebration for a 103-year-old fellow resident.

“I haven’t been this happy in a very long time,” he said. “I just wished I was doing it with my family.” Hard-hit by the pandemic, his family could no longer provide for him, he said.

The economic ravages of COVID-19 are forcing some families in Zimbabwe to abandon the age-old tradition of taking care of older people.

Some roam the streets. The lucky ones end up at facilities for older people— once widely viewed by many Zimbabweans as “un-African” and against the social bonds that have held extended families together for generations.

“Parents or elderly relatives have become an extra strain in this pandemic so although it goes against our culture, many people are finding old people’s homes as the only option,” Gavi said.

Zimbabwe’s care homes have experienced a 60% increase in admissions since the COVID-19 pandemic erupted in March 2020, and most of the country’s more than 170 facilities for older people are full, she said.

COVID-19 has increased the risk of abuse and neglect of older people across Africa and around the world, according to a report by HelpAge International.

In addition to being one of the groups most at risk of severe illness and death from COVID-19, older people are chronically neglected in response and recovery efforts, especially in lower-income countries, according to the report, “Bearing the Brunt.”

For the older people in care institutions, the experience is both a saving grace and a source of anguish.

Bhatare said that after he retired from work as a quarry miner about two decades ago “all was well” as he alternately stayed with his two daughters and other relatives.

He was living with a married niece and four of her children when COVID-19 hit and their income from selling goods on the street dropped. Food in the home became scarce, tensions rose, and to survive Bhatare began foraging for meals on the streets until concerned neighbors alerted HelpAge, which found him a place in the Melfort home, about 50 kilometers (30 miles) east of Harare, the capital.

“My daughters are married but they are also struggling. I had become a strain to everybody,” he said.

Zimbabwe’s economy was already battered before the pandemic and now more than 80% of urban households are struggling to buy basic food supplies, while large numbers of rural families are also sinking into hunger, according to the World Food Program.

People age 70 and above make up less than 3% of Zimbabwe’s population of about 15 million and often became casualties of belt-tightening.

“They are not bringing in any income in an environment where even young children are working to contribute towards household incomes. The elderly are becoming the sacrificial lambs. COVID-19 has really knocked them down,” said Phillip Pasirayi, a sociologist and director of the Center for Community Development in Zimbabwe.

Feeling “abandoned” by their families can be a shock for many older people at care facilities, he said.

“It doesn’t really resonate with what we are accustomed to as Africans. You want to spend your last days surrounded by family. That is the tradition,” Pasirayi said.

“When they are forced into old people’s homes, many go into depression, into dementia … they are confused that their children or relatives have abandoned them,” said Daniel Francis, the administrator at Melfort Old People’s home.

Some families resort to tricks to remove their older relatives, he said.

“With the pandemic, some people take an elderly relative to a faraway place. They buy them a drink at the shops, tell them ‘We are coming back,’ and they go for good. Elderly persons are being dumped and they are forgotten,” Francis said. Police take such people to the social welfare department.

“The social welfare department doesn’t have a home so they come to us,” said Francis, whose facility has a capacity for 40 resident. But in the pandemic it limits numbers to 22 to allow more physical distance between residents.

The care homes that don’t charge their residents, and are funded by charities and churches, are under strain.

The Melfort home would find it difficult to return to full capacity, he said, as its donations have dropped by more than 60% in the pandemic, he said.

Times are even tougher at the Society for the Destitute Aged’s care home in Harare’s Highfield township. Princess Diana opened an accommodation wing amid much fanfare in 1993. But today paint is peeling off the walls, ceilings are falling in and bees have taken over the out-of-service 200-liter (53-gallon) water heater.

The home has no vehicle so when a resident needs medical care, manager Emilia Mukaratirwa must risk crowded public taxis or, when money permits, hire a small car to rush a retiree to a hospital.

“The whole place needs a makeover, but for now just getting bread is like Christmas. That’s how desperately we need help,” Mukaratirwa said.

Despite the disappointment of not being with family, Bhatare at the Melfort Old People’s home is adjusting to his new reality.

“These strangers have become my family, they treat me well,” he said. “I still love my real family but I don’t want to be a burden to them.”