Masvingo Magistrate Mbonisi Ndlovu has acquitted 9 Masvingo Residents Forum members on the 24th of September 2021 who were on trial for allegedly protesting against poor service delivery by Masvingo City Council (MCC). 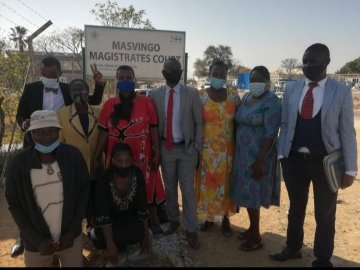 The nine members were arrested on 23 April 2021 and were charged with section 37 of criminal law codification participating in unlawful gathering with intent to promote public violence. The nine were granted $5000 bail each after spending a night in police cells. The nine MRF members (5 women and 4 men) are secretary general Prosper Tiringindi, R Mavhenge, A Mufamba ward 5 chairperson, Mataga Clara, Christine Mukuma, Viola Masuma, Kudzai Chamunorwa, Matter Zigwata and Leeroy Taylor were just being persecuted for an offense which they did not commit.  The accused were worried and disturbed by the continued postponement of the matter without trial. The arrested women were no longer doing their work as they spent more hours at the court. The nine were represented by Martin Mureri of Zimbabwe Lawyers for Human Rights.

Scenes at Masvingo magistrate court after the acquittal: https://youtu.be/2eVnLX4DEiY

Residents of Masvingo have their hands tightened up as the responsible authorities have started engaging in water disconnections to defaulters without any notice. Quite a number of residents are facing drastic challenges when it comes to paying off their high water rates as they have not fully recovered from the series of lockdowns imposed by the government in a bid to curb the increased cases of Covid 19 infections. Masvingo residents are complaining that many days they are not receiving water, but at the end of the month their bills are very high. In high density suburbs like Mucheke, Old Railways, and Victoria Range, people go for weeks without water. In all these suburbs, residents are waking up at night to access water, exposing them to issues of rape and robbery, especially women and girls.

Scenes at Masvingo City Council led to the arrest of the nine members: https://youtu.be/KXQ8Y0Ej7x4