Chiredzi – The Zimbabwe Defense Forces (ZDF) has deployed hundreds of soldiers who are armed to teeth in areas in and around Chiredzi thereby causing panic among villagers. 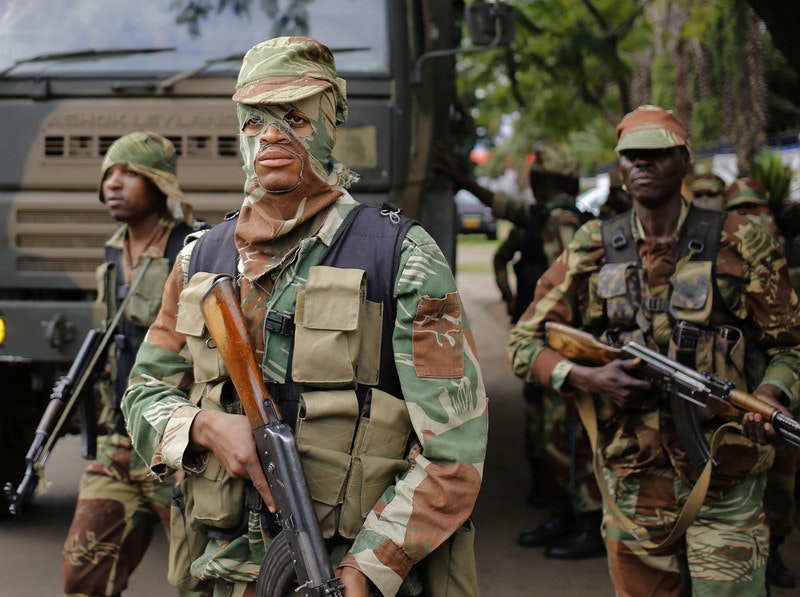 Some villagers from Chilonga where Government plans to evict 12 000 families to give way to a Lucerne grass project who spoke on condition of anonymity said they were afraid that the Army will use force to evict them.

Deputy director Army public relations, Lieutenant Colonel Alex Zuva confirmed the deployments in a statement to The Mirror but said that these were routine training programmes.

Masvingo Centre for Research Advocacy and Development (MACRAD) director, Ephraim Mtombeni said it is unprofessional and wrong for the Army to deploy in a civilian area without giving clear information to allay inevitable fear.

“There are hundreds of soldiers who are armed like they are in the battlefield. They are armed to teeth, it’s frightening,” said one village head who declined to be named.

Mtombeni who also works with villagers in Chilonga said what raised more eyebrows is that Zanu PF District Coordinating Committee (DCC) chairperson for Chiredzi Siyaki Mundungehama is doing the public relations for the Army by issuing statements to villagers.
The deployments have heightened fears of violence as the 2023 elections beckon. Mtombeni urged the Army to do their training in empty places like Gonarezhou instead of places populated with people and domestic animals.

“ZDF should make use of areas like Gonarenzhou. The presence of ZDF in Chilonga without clear communication instills fear in communities. Further, Zanu PF should not issue statements on behalf of ZDF. These are distinct institutions which must perform their duties as stipulated by the law,” said Mtombeni.

“The exercise is part of routine training that ZDF conducts regularly in fulfilment of its Consitutional mandate. The field training exercise is beig conducted jointly with other security services including ZRP and the President’s Department. The training is being conducted in areas under Chief Sengwe, Chief Chitanga, chief Mpapa, Chief Neromwe, Chief Chilonga and Chief Gezani.

“As part of the ZDF Community Assistance programmes, a COVID-19 vaccination programme will run concurrently with the exercise. The field training exercise which started on September 27, 2021 is expected to end on October 23, 2021,” said Lieutenant-Colonel Zuva.

There is however, a legal notice issued by the Minister of Local Government, July Moyo on February 26, 2021, ordering over 12 000 people on 12 940 hectares of Chilonga communal land in Chiredzi to leave immediately.

Mundungehama’s statement to the villagers reads; “How are you Chiredzi District residents? I am here to notify you that soldiers (ZDF) will be displaying their drills (Military Exercises) in most of the wards if not all, starting from October 7, 2021, until the end of the month.

“You are urged to carry on with your usual chores. Don’t be afraid of them, but you should respect them because they are your children, brothers, fathers, mothers, and sisters who protect you from the enemies.”