THIRTY-NINE liberation war veterans will spend the night in prison detention after Harare Magistrate Barbra Mateko deferred her ruling to Friday 29 October 2021 on their application seeking to be set free citing violation of their fundamental rights by law enforcements agents who arrested them early this week. 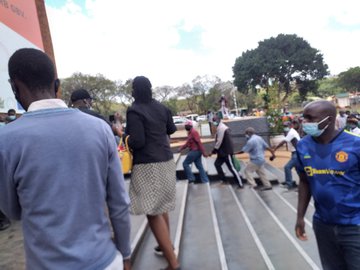 The liberation war veterans, who were arrested by Zimbabwe Republic
Police (ZRP) officers on Tuesday 26 October 2021 in central Harare,
were charged with participating in a gathering with intent to promote
public violence, breaches of peace or bigotry as defined in Section
37(1)(a) of the Criminal Law (Codification and Reform) Act.

Prosecutors claimed that the war veterans gathered at Africa Unity
Square singing “Chimurenga songs” with the intention to promote pubic
violence or breaches of peace or realising that there was a real risk
or possibility of forcibly disturbing the peace, security or order of
the public.

The war veterans, prosecutors charged, intended to handover a petition
to Parliament and at Munhumutapa Building, which houses President
Emmerson Mnangagwa’s offices outlining their grievances but were told
to only allow five people to do so but reportedly refused and insisted
that they all wanted to present as a group.

The prosecutors claimed that the war veterans refused to heed an order
issued by ZRP officers to disperse and started singing “revolutionary
songs” and thereby disturbing the peace and movement of pedestrians
and some vehicles.

In court, the war veterans filed an application seeking an order for
their immediate release after telling Magistrate Mateko that their
arrest and detention was arbitrary and unlawful as they had not been
advised of the charges they were facing upon arrest and were only told
on Wednesday 27 October 2021 after their lawyers had protested against
the conduct of the law enforcement agents.

The liberation war veterans, who are represented by Paidamoyo
Saurombe, Idirashe Chikomba, Tinashe Chinopfukutwa and Blessing
Nyamaropa of Zimbabwe Lawyers for Human Rights and Chawaona Kanoti
also argued that they should be immediately released from custody as
they had been detained for more than 48 hours without being brought to
court in breach of Section 50 of the Constitution.

Magistrate Mateko, who ordered the detention of the war veterans in
remand prison, will hand down her ruling on Friday 29 October 2021 at
11:15 AM.