ZIMBABWEAN President Emmerson Mnangagwa (pictured) must regularise his illegitimate leadership position, but not contest the 2023 presidential election, as he would be a geriatric by then, prominent corporate executive Caleb Dengu — who is an ally of Vice-President Constantino Chiwenga — has said. 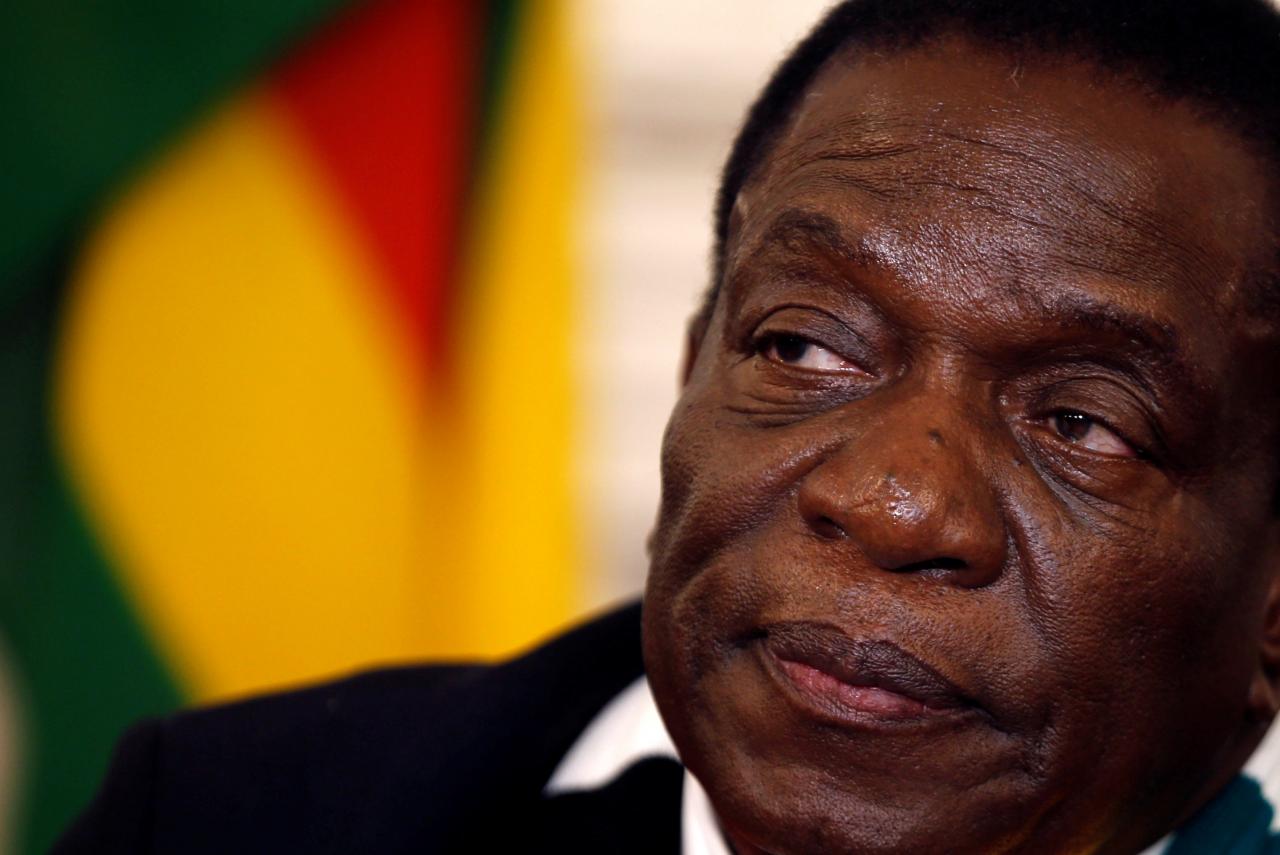 This comes as Mnangagwa is currently under siege from within the ruling Zanu PF as party bigwigs aligned to Chiwenga say he ascended to power internally through unconstitutional means, hence he is an illegitimate leader.

Zanu PF member Sybeth Musengezi has filed a High Court application challenging Mnangagwa’s rise to power and the resultant dubious mandate through the infamous 19 November 2017 central committee meeting, which he says was not lawfully convened, constituted and conducted.

The shock challenge, coming as it did around the Zanu PF annual conference in Bindura, foreshadows the culmination of the party’s unresolved leadership fight, which is expected to explode during the elective congress next year ahead of the 2023 elections. Mnangagwa is determined to seek re-election, but Chiwenga and his faction are battling to stop him in his tracks.

In a book titled The Bridge — Pathway To New Zimbabwe, Dengu, a well-established development banker, who has specialised in structured project and trade finance, as well as risk management systems, says Mnangagwa should not run in 2023, but instead allow a new younger leader to contest.

“Your Excellency, given your advanced age and the workload required to turn around the nation, a nation as broken as ours, it is advised that you do not seek re-election as state president in 2023,” Dengu says.

“You will be 82 years old then. You can choose to remain as First Secretary of Zanu PF to assist with generational transformation of leadership in the party and government. Given the demography of the country, the nation requires younger leadership to run the country. You have an opportunity to identify competent young talent in the 40-60-year range to take over positions in both government and Zanu PF. The recommended leadership can be security-cleared by our National Security Council (NSC).”

Dengu says the NSC has to ensure ministers consider national security in a strategic way, as they formulate and implement government policies and programmes.

On Mnangagwa’s legitimacy, Dengu, who was in the liberation struggle and later in government, said: “Your Excellency, you became leader of Zanu PF during the transitional period from RG Mugabe to the 2nd Republic, which was christened ‘The New Dispensation’ in November 2017. Your elevation to the position of First Secretary did not follow the established election process which starts from provincial nomination.

“It is therefore imperative that you revisit that chapter in order to get the full support and endorsement of Zanu PF. This will stop dissent and leadership challenges in the party ranks. Your government is mostly undermined by the Zanu PF elite rather than opposition members.”

The businessman, a RioZim Limited board vice-chair (who also chairs the audit and risk committee, as well as the remuneration committee) and is managing partner in CDF Trust and Consulting BV, an investment advisory platform and private equity management firm, said Mnangagwa should visit provinces not just in his capacity as President and Zanu PF official, but as someone seeking to regularise his unlawful position as party leader. Dengu, who staunchly supported the Mnangagwa government when it came to power in 2017 after the overthrow of the late former president Robert Mugabe in a military coup, is Chiwenga’s homeboy and ally.

He was born in Hwedza — where the Vice-President also comes from — in 1959, just before the National Democratic Party (NDP) was formed in January 1960. The NDP, led by founding nationalist movement leader Joshua Nkomo, was preceded by the African National Council — also led by Nkomo.

The NDP was banned in 1961 and Zapu emerged. Zapu was also banned in 1962 and the People’s Caretaker Council (PCC) was formed as a front. Both Zapu and the PCC were led by Nkomo. Zanu, a breakaway from Zapu, was formed in 1963 led by Ndabaningi Sithole. Mugabe seized power from Sithole in a prison coup in 1974 when nationalist leaders from Zapu and Zanu were in detention. He only regularised his position after ousting Sithole three years later at the Chimoio congress in 1977.

Mugabe, also removed in a coup in 2017, was at the helm of Zanu for 40 years. Before be-coming the Zanu helmsman, he had been secretary-general, having been elected at the 1964 congress in Gweru when Sithole emerged as party leader.

Dengu joined the liberation struggle on 7 April 1975 aged 16 with six friends. Fol-lowing Independence in 1980, he worked in the ministry of Finance, Office of the President and Cabinet, Central Mechanical Equipment Department and Urban Development Corporation.

From 1981 to 1985, he trained as a chartered secretary with the British Institute of Chartered Secretaries and Administrators, becoming an associate and fellow thereafter be-tween 1986 and 1988. He went on to attain a Master of Business Administration degree at the University of Zimbabwe in 1993 and do an advanced financial management programme at Strathclyde Graduate Business School in Glasgow, Scotland.

He came back and ran businesses, including CDF Trust and Consulting BV, worked with RioZim Limited, specifically its subsidiaries RioGold and RioEnergy. He became company deputy board chair and chairperson of the audit and risk committee, as well as the remuneration committee.

Prior to the formation of CDF Trust in 2010, Caleb was a development banking and finance professional for 22 years. He worked for international and regional development banks. He also worked for Amsterdam-based Common Fund for Commodities and Nairobi-based PTA Bank, now the Trade and Development Bank.

Among other undertakings, he set up a greenfield coal-mining company in Zimbabwe, now the largest coal producer in the country; advised Haskell Group to sell a platinum project to Great Dyke Investments, a consortium com-prising Russians, the government and the Zimbabwean military (now owned by the Russians and Landela Investments); and is currently involved in Zimborders that is modernising Beitbridge Border Post.

In his book, released last year in September and that Chiwenga reportedly read, which gives a synopsis of what actually went wrong to such a promising country like Zimbabwe and makes concrete suggestions on how to arrest the persistent decline and change the economic trajectory, Dengu identifies leadership and policy failures as the main reasons for the current parlous state of the nation and people’s suffering.

“The main cause of Zimbabwe’s dramatic economic collapse is leadership failure, hence it is important to properly locate the effect of leadership on the country’s development,” Dengu says.

“We need to identify leadership at all levels that believes in meritocracy, excellence, openness and integrity. Leadership that is capable of applying resources to change paradigms in a way that will impact lives of citizens.

“The Zimbabwe government under Robert Mugabe was applying 20th century solutions to 21st century problems, hence the demise of the country. Even the new dispensation that took over in 2017 has not yet figured out the consequences of smart sanctions and the impact of leadership.”

Ultimately for Dengu, the bottom line is that Mnangagwa is illegitimate and should not run in 2023.