SLIGHTLY more than a decade ago, a drive along Portland Road in Gweru’s heavy industrial sites would lead one to the glass-manufacturing giant — and one of the companies that made the Midlands capital a force to reckon with. 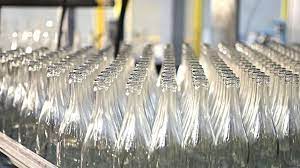 Fast forward to 2021. Zimbabwe’s sole glass maker is now a pale shadow of its former self, despite being acquired by a powerful and well-connected businessman who last year promised to change the fortunes of the ailing company that used to sustain thousands of livelihoods.

Midlands entrepreneur Douglas Kwande, an associate of President Emmerson Mnangagwa, last year acquired Zimglass under unclear circumstances, but has failed to turn around the once thriving company to its former glory.

When The NewsHawks visited the company premises this week, a dark shadow hung over the former corporate giant. Two old vehicles were parked inside the once bustling premises, adjacent the main gate. One of the cars, an old bread-delivery van emblazoned with the letters DCK (the trade name of Kwande’s retail shops) appears abandoned, with no sign of ever shifting from that spot.

A handful of weary-looking workers were milling inside the grounds, where a maize milling machine is stationed.

“We are processing maize into mealie-meal here and your enquiry about the refurbishment of glass furnaces is beyond our knowledge,” one worker said wryly.

Kwande was not answering phone calls when The NewsHawks sought his comment. A WhatsApp message delivered to his mobile number was also not responded to.

The businessman was last year quoted as saying that although the revamping of Zimglass required huge sums of money, as his company had to start from “scratch”, he was “ready to go”.

In May last year, Kwande, through his investment vehicle Brainman Investments, bought Zimglass for a measly ZW$22 million, with many questioning the valuation, as well as the procedure followed in securing the once thriving firm, which used to employ thousands of workers.

Zimglass was a wholly owned subsidiary of the state-owned Industrial Development Corporation of Zimbabwe Limited before its subsequent takeover by the Midlands businessman.

Zimglass ceased operations in 2010 before being placed under judicial management in 2014. Kwande then bought it, more than 16 months ago. Investigations by this publication revealed that plans to construct a sodium silicate furnace have since stalled, amid reports that bricks needed for the furnace are expensive and have to be imported.

According to experts, sodium silicate furnaces are designed with highly specialised features since the refractories installed inside them should take into account the high corrosion rate.

At its peak, Zimglass’s core business was the processing and beneficiation of silica, a main ingredient in glass making. The company operated two electric glass furnaces (named G1 and G2 units) whose combined production was 120 tonnes per day.

G1 furnace, which is mothballed, needs refurbishment while G2 furnace, which used to produce packaging for carbonated soft drinks, beer and liquor bottles, was shut down in 2013. The two furnaces require millions of US dollars to keep them running.

Brainman is also at the centre of a storm with Zimglass former workers over outstanding salaries and allowances dating back to 2014. The new investor has not shown much commitment to settle the dues.

Kwande also acquired Industrial Sands Limited, a subsidiary of Zimglass, which used to supply quality silica sand for glass manufacturing, water purification, sodium silicate manufacturing, construction and foundry industries but the former has also failed to operate to expectation, raising questions as to the motives behind such asset buying by Zanu PF-connected business people.

“These (business) acquisitions and others such as agricultural prime land and gold claims, among others, are usually for speculative purposes,” one well-placed ruling party businessperson said.

In 2019, Kwande, who also owns DCK Bakeries, shocked Gweru residents when the then minister of Industry Mangaliso Ndlovu officially opened a small bakery situated opposite the iconic Cecil Hotel in the Midlands capital.

Many questioned the businessman’s connections with senior government officials, but it was not long before the controversial businessman posted pictures of himself and Mnangagwa while in a car with bread between them. The pictures went viral on social media platforms.

He also attracted attention last year after Bulawayo whistleblowers wrote a letter to the Zimbabwe Anti-Corruption Commission complaining that the Midlands miller was allegedly “fraudulently” benefiting from a Grain Marketing Board allocation of maize meant for Bulawayo metropolitan province.

Kwande has grain milling machines located in Gweru along Bulawayo Road. His accusers queried how a Midlands miller could benefit from grain allocated to other regions.