There are mounting fears for Zimbabwe’s currency, with the Confederation of Zimbabwe Industries warning that the Zimbabwe dollar is ‘in real peril’. In a letter to its members, it said that the greatest risk facing the economy was ‘an inappropriate response’ by the government. 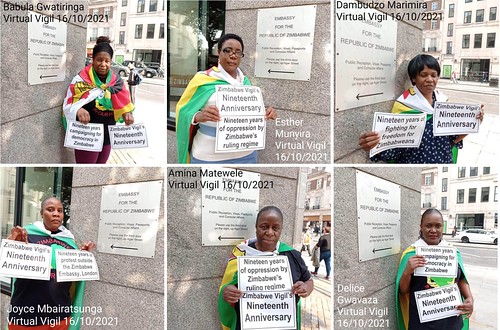 Many currency traders have been arrested in recent weeks accused of manipulating the Zimbabwe dollar in trading on the black market. The Zimbabwe dollar has been changing hands for as much as 200 for one US dollar while the official rate is about 90 (see: https://www.bloomberg.com/news/articles/2021-10-12/zimbabwe-business-warns-currency-in-peril-urges-policy-response).

The American economist Steve Hanke, who has been tracking the Zimbabwean economy for many years, said the Zimbabwe dollar had depreciated by 93% since it was brought back into circulation two years ago. ‘President Emmerson Mnangagwa is not only corrupt but when it comes to economics is totally ignorant’, he said. ‘Zimbabwe’s currency is in a death spiral. Now the corrupt government is threatening to suspend all businesses using black market exchange rates to price goods. I’ve seen this movie before. It has a tragic ending.’ (see: https://www.newsday.co.zw/2021/10/mnangagwa-ignorant-of-economic-issues-us-economist/.)

The decline of the Zimbabwe dollar was not the only thing worrying the outside world. There has also been an anxious reaction to the Zanu PF violence against the MDC Alliance.

Senator Jim Risch of the US Senate Foreign Relations Committee said the Zimbabwe government should take concrete steps to respect human rights if sanctions were to be lifted. ‘Political violence by Zanu PF against the opposition is unacceptable. There must be accountability’, he said. In the UK similar observations were made by Jonathan Oates of the House of Lords and Co-Chair of the All Party Parliamentary Group on Zimbabwe, who said he was deeply worried to hear of an attack by Zanu PF activists on opposition leader Nelson Chamisa’s convoy in Masvingo where Chamisa was to meet local leaders (see: https://www.newsday.co.zw/2021/10/mdc-alliance-claims-more-attacks/).

For his part, Chamisa appealed to Mnangagwa to ‘stop dividing people and destroying this beautiful country’. (See: https://www.newzimbabwe.com/stop-violence-chamisa-tells-mnangagwa/.)