THE fact that Vice-President Constantino Chiwenga is contemplating challenging President Emmerson Mnangagwa for the Zanu PF presidency at the party’s elective congress next year, while factions loyal to the two protagonists are slugging it out at various levels of the party, including at provincial and district levels, is testimony to the fact that the 2017 coup coalition has collapsed. 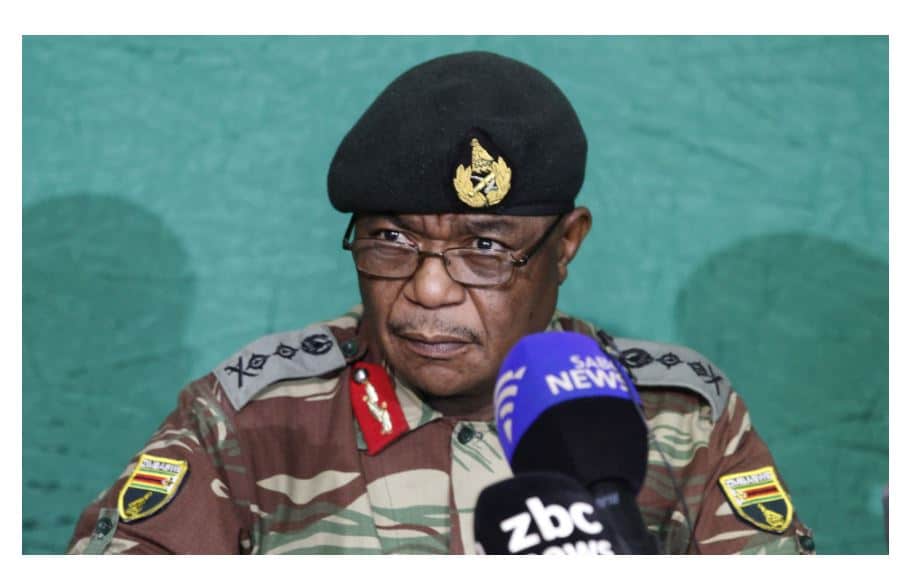 Chiwenga, who was the Zimbabwe Defence Forces commander, led a military coup which ousted his longtime mentor, the late former president Robert Mugabe, in November 2017, paving way for Mnangagwa’s rise, on the understanding that he would serve only one term.

Under the coup arrangement, Mnangagwa was meant to pass on the baton to Chiwenga in 2023, but no sooner had he assumed power than he started consolidating his grip by, among other tactics, purging Chiwenga’s allies, with the aim of remaining at the helm, setting the stage for a power battle between the two gladiators.

Officials say the divisions and infighting, particularly in Masvingo, Manicaland and the Mashonaland provinces during the ongoing Zanu PF restructuring exercise which have been chaotic and violent, were stoked by factional infighting.

“Similarly, the recent protests by war veterans over their living conditions and their subsequent arrest tells you that Mnangagwa and his backers believe they were pushing an agenda. He is all too familiar with the role played by war veterans in setting the stage for Mugabe’s eventual ouster in 2017 and the reading is that the same people who mobilised them to confront Mugabe have also mobilisied them against him,” a senior Zanu PF official said.

“It’s not a coincidence. War veterans last month also demonstrated against (Zanu PF chairman and minister of State for Masvingo Provincial Affairs, (Ezra) Chadzamira in Masvingo and were among those who demonstrated against (Zanu PF chairperson (Mike) Madiro in Manicaland. The fighting in Midlands between a group loyal to State Security minister Owen Ncube and Zanu PF chairman Daniel Mackenzie Ncube is seen as a fallout between faction members rather than an extension of the Mnangagwa-Chiwenga fight.

“Tensions are expected to continue rising until next year’s congress unless Chiwenga decides not to pursue his ambition. He however feels deeply betrayed by Mnangagwa.”

But Chiwenga last week moved to strategically de-escalate the dramatically rising political temperatures between him and Mnangagwa, saying his rival will be the uncontested Zanu PF candidate in the 2023 elections.

The move came after Chiwenga’s top business executive ally Caleb Dengu, who has said Mnangagwa is illegitimate and must not run in 2023, slipped out of the country to catch a breath of fresh air in the Netherlands as the President’s hounds turned the heat on him, threatening him with a fierce backlash and financial ruin.

Mnangagwa’s legitimacy as party leader is being challenged in the courts by party member Sybeth Musengezi. Although Musengezi says he is acting alone, his move is overwhelmingly supported by the Chiwenga faction.

The defeated yet still alive Zanu PF faction — G40 — is also supporting the move. This has created a convergence of forces between the Chiwenga camp and the dormant but resurrecting G40 group. Manoeuvres are underway by Chiwenga and G40 strategists to realign forces within Zanu PF and challenge Mnangagwa head-on next year.

Tenson and mistrust between Mnangagwa and Chiwenga have been building up since the early days of the coup, as the two disagreed on cabinet and Zanu PF appointments, among other decisions. The June 2018 bombing at White City Stadium in Bulawayo also increased tension between the two leaders, which many say was targeting Mnangagwa, as it was understood to be an inside job.

Mnangagwa wanted to appoint Oppah Muchinguri his deputy, but Chiwenga demanded the position, while initially he wanted war veteran Victor Matemadanda to be appointed the Zanu PF political commissar, but his deputy insisted that the position be given to his close ally retired Lieutenan-General Engelbert Rugeje.

Mnangagwa has, however, taken advantage of Chiwenga’s health woes to purge his allies from government and the military, often while his deputy is seeking treatment outside the country, thereby strengthening his hand. The Covid-19 pandemic has also rattled the Chiwenga faction as it eliminated some of his strongest allies such as retired Leutenant-General Sibusiso Moyo, who was the face of the coup, after announcing the military action as well as former Air Force of Zimbabwe commander Perrence Shiri.

Mnangagwa and his supporters started pushing for the President to remain in charge beyond 2023 as early as December 2018 during the ruling party’s Esigodini annual conference.

Prior to the push, Chiwenga and others had been shocked to see Mnangagwa announcing in an interview in September 2018 during the 73rd session of the United Nations General Assembly in New York that he would seek re-election in 2023. Mnangagwa’s power consolidation drive appeared to gain momentum following Shiri’s death in July 2020 and Moyo’s death in January,  given that the two were critical political cogs in the Chiwenga faction.

After Shiri’s death, Chiwenga and his army-driven faction pushed for his replacement with a person with a military background, but Mnangagwa appointed his ally from Masvingo, Anxious Jongwe Masuka.

One of Mnangagwa’s key strategies has been to mainly appoint his ethnic Karanga homeboys, mostly from the Midlands and Masvingo provinces, into key positions, as part of a power consolidation strategy.

Chiwenga, Shiri and Moyo were critical in the planning and execution of the 2017 coup.

Besides being the face of the coup, Moyo was one of the key architects of the operation against Mugabe and worked hand-in-glove with Chiwenga when he was in charge of the military’s business units, which became central in building a war chest to execute the mission.

Key commanders — who pivoted the coup, including the commander of the Presidential Guard battalion retired Lieutenant-General Anselem Sanyatwe — were removed in February 2019 while Chiwenga was battling ill-health in China.

Other casualties were retired Lieutenant-General Martin Chedondo and retired Air Marshal Sheba Shumbayawonda. In May 2019, Mnangagwa then appointed Sanyatwe Zimbabwe’s ambassador to Tanzania, while Nyikayaramba was posted to Maputo, Mozambique.
Chedondo was sent to China. Sanyatwe had a personal relationship with Chiwenga to the extent that he flew from Tanzania to assist him finalise his divorce proceedings with his wife Marry Chiwenga nee Mubaiwa.

Sanyatwe presented the Mubaiwa family with Chiwenga’s divorce token (gupuro), a traditional way of confirming that a marriage is irretrievably broken.

Another big blow for the Chiwenga camp was Rugeje’s removal from heading Zanu PF’s critical mass mobilisation political commissariat. Rugeje operated in the war room during the coup.

Soon after the coup, Chiwenga arm-twisted Mnangagwa to appoint Rugeje as political commissar ahead of his preferred candidate Victor Matemadanda, albeit temporarily.

Mnangagwa later removed Rugeje from the position before appointing Matemadanda in June 2019. Mnangagwa’s cumulative manoeuvres appeared to have shifted the balance of power in Zanu PF in his favour, although Chiwenga had an upper hand after the coup.

Chiwenga has however launched a fightback and is positioning himself to challenge Mnangagwa at next year’s congress.

The political war of attrition between Mnangagwa and Chiwenga recently found expression in the President’s controversial new biography as the internecine clashes over unresolved leadership issues play out in the party ahead of its elective congress next year.

That came as independent Norton MP Temba Mliswa threw the cat among pigeons through a public voice note message in which he disclosed that Mnangagwa’s former adviser Chris Mutsvangwa, leader of war veterans and a former minister, has been plotting to remove Chiwenga.

He said Mutsvangwa was recorded by the late Zimbabwe National Army commander Lieutenant-General Edzai Chimonyo talking about that.

Mnangagwa in August launched his authorised biography titled A Life of Sacrifice: Emmerson Mnangagwa, which book reviewers and political analysts say exposes the widening rift between the two.

The 154-page biography, which Mnangagwa described as a “brief window” into his life, was authored by Eddie Cross, a former opposition MDC high-ranking official and MP. It is a hagiography for Mnangagwa which depicts Chiwenga in negative light through its narrative.

Cross, Mnangagwa’s biographer and new loyalist, said the President would brook no nonsense from those threatening his grip on power, a warning to Chiwenga.

Mnangagwa, who at the time of the coup had fled the country to South Africa after his mentor-cum-tormentor Mugabe had hounded him out, only returned after Chiwenga led the coup that sent Mugabe packing. Mugabe later described Mnangagwa as his “tormentor”.

The book, which has been reported on by The NewsHawks since launch, reveals that Chiwengwa’s appointment as co-deputy, together with Kembo Mohadi (who resigned early this year after a sex scandal), was part of Mnangagwa’s coup-proofing ploy.

Mnangagwa appointed General Philip Valerio Sibanda to succeed Chiwenga as commander of the Zimbabwe Defence Forces. Sibanda, according to the book, is “possibly the best soldier in southern Africa and a man that was deeply respected in the army”.

“Mnangagwa’s actions drew little attention, but what the President was doing was closing the door on any possibility of the military -assisted transition (military coup) being repeated. He needed to know that the security services were led by men in whom he had confidence as professionals,” the book says.

Differences between Mnangagwa and Chiwenga played out when the latter demanded that a state of emergency — martial law — be declared during the 2019 riots which had been triggered by a 150% increase in the price of fuel.

“When it became known that a state visit to Russia was planned for the week beginning the 14th January 2019, disturbing intelligence was received that disturbances were planned,” the book reads.

Cumulatively, this has now divided the party down the middle, leaving it regimented into two major factions led by Mnangagwa himself and Chiwenga.

The Mnangagwa group is mainly Midlands and Masvingo provinces-based, while the Chiwenga one has threads cutting across different regions, although its main base has roots in the three Mashonaland provinces — Mashonaland East, Mashonaland West and Harare.

Chiwenga is mainly backed by disgruntled former ministers in the party, including those now working at party headquarters, led by Zanu PF secretary for administration Obert Mpofu.

He also has the support of those with security backgrounds. Chiwenga’s marksman is retired Lieutenant-General Rugeje, who last year in July challenged Mnangagwa in a Zanu PF politburo meeting over the growing divide between him and those who put him in power.

“The factions have now crystalised and solidified over the past three years. Most senior party leaders have taken a position and now know where they belong, although there is big middle ground among those in the middle and lower ranks, as well as foot soldiers,” a source said.

“This projects Zanu PF’s clan, ethnic and identity politics, as well as factionalism based on personalities, class or material interests that have toxified and polarised Zimbabwe’s body politic since 1980.”

The volatile situation is made all the more explosive by the dangerous backdrop of events such as the June 2018 White City bombing in Bulawayo, the shooting at Rugeje’s Harare house in October last year and, most recently, the mysterious burning of Zanu PF senior official Patrick Chinamasa’s house. Chinamasa is a Mnangagwa loyalist.