45 year old Memory (not her real name) of Sigodini Village in Matopo District (Zimbabwe) has a physical disability. 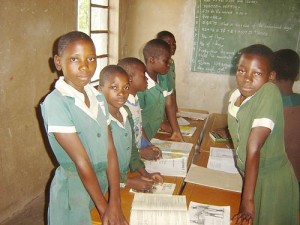 She was beaten and driven out of her home by her son, who had come back from South Africa, claiming ownership of the homestead, which he now stays in with two younger siblings. Memory has experienced emotional, physical as well as psychological abuses. There is also symbolic violence in the fact that even though minor at the time of obtaining the family property from the Village Head, everything she owns was registered under her son’s name (because of his gender). In rural settings, which are largely patriarchal, the village elders are supporting her son regardless of the fact that the mother was physically assaulted leading to heightened stress. They say the son as a man is the head of the family now and thus owns everything.

Memory’s experiences are not rare in Zimbabwe. They happen recurrently in many communities, affecting girls and women with different disabilities. The family or close community members perpetuate the majority of the violence.

Women and girls with disabilities continue to face intersecting forms of discrimination due to their gender, disability, and social and negative cultural norms as well as religious beliefs. These factors increase their vulnerability and put them at a higher risk of gender based violence (GBV), sexual and gender based violence (SGBV), Harmful Practices (HPs), poverty and marginalisation. Community leaders, as the custodians of traditional practices, are critical in any intervention that seeks to redress cultural and social norms.

“People with disabilities are considered second-class humans in my community… Some disabled girls even suffer physical abuse by their relatives or are locked in their homes.” -Mary (not her real name) (58 years) from Mutasa District

Since 2018, the UNESCO Regional O¬ffice for Southern Africa has been one of the six UN Agencies implementing the Spotlight Initiative in Zimbabwe, with the financial support of the European Union (EU). UNESCO is focusing more particularly on addressing the intersectional discrimination and violence that girls and women with disabilities experience because of their disabilities, gender, socioeconomic backgrounds, geographic locations, etc. Interventions closely involve the Organisations of Persons with Disabilities (OPDs) and include:

“Before the lobbying and advocacy training in June 2020, I used to do everything for my daughter, I used to bath her, cook for her and even wash her clothes because I felt I had to protect her the most due to the nature of her disability. When the Federation of Organisations of Disabled Persons in Zimbabwe (FODPZ) came to train us, I was enlightened that as parents with children who have disabilities we should teach them to self-represent, advocate and to empower them with education. This programme helped me to an extent that when I got back home I started training my daughter on every aspect I thought best would empower her. Now she can sweep the house, she can bath on her own, she cooks for us something she never did before.” -Mother (from Hopley zone) of a 19-year daughter who has epilepsy and intellectual disability.

Through FODPZ, the Spotlight Initiative mobilised 168 women and girls with various disabilities (both below and above 18 years old) from Mashonaland West and Central and from Harare, to join the Provincial and National Consultations on the National Disability Policy and the Persons with Disabilities Bill, which will repeal the Disabled Persons Act of 1992. FODPZ organised lobbying and advocacy trainings in three Spotlight target provinces and nine districts: Harare (Epworth and Hopely), Mashonaland Central (Guruve, Rushinga, and Shamva) and Mashonaland West (Zvimba, Karoi, Makonde and Kariba), to allow girls and women with disabilities to express their concerns and aspirations in the consultative processes. Lessons learnt from the field explicitly underscored that most of them suffer in silence as their communities do not often recognize their rights and respect their dignity.

FODPZ submitted two Advocacy papers to the Ministry of Public Service, Labour and Social Welfare and to other relevant ministries with stories and recommendations from women and girls with disabilities. The advocacy issues included: access to justice, property rights, access to education in the community, self-representation in the COVID-19 Taskforces, gender equality in decision making structures, right to establish a family and have children, access to information and protection from all forms of violence particularly sexual abuse and domestic violence.

“In Zimbabwe, the Spotlight Initiative has given persons with disabilities and OPDs that represent them an opportunity to lead on interventions to address the plight of women and girls with disabilities in rural areas. This has enabled us to cover the gaps that existing GBV initiatives have not usually done, by targeting and involving women with disabilities in their communities.” -Agnes Chindimba, Deaf Women Included Director.

In 2021 and 2022, UNESCO will continue to collaborate with OPDs to ensure that the voices of girls and women with disabilities are heard in the public arena, notably in the implementation of the National Disability Policy that was adopted and launched by the Government in June 2021. Building Coalitions for change between OPDs and the Women Movement’s will be another key area of intervention, for the benefit of both parties.