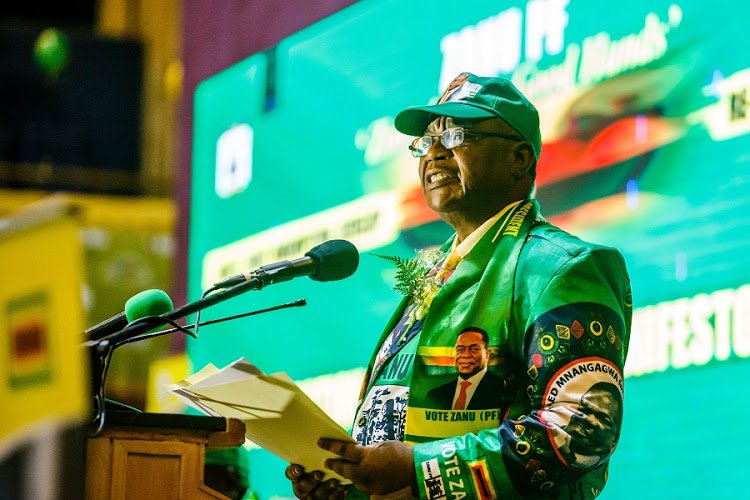 Zimbabwe Vice President Constantino Guveya Chiwenga delivers his speech during the launch of the Zanu PF election Manifesto ahead of the 2018 harmonised general elections in Zimbabwe May 4 218.

This is a very sad development clearly pointing to a desperate and blatant bid to rig elections through coercing civil servants in the rural areas to help them win elections.

The program was a direct violation of sections 200 and 208 of the Zimbabwe Constitution which provide as follows:

208 . Conduct of members of Civil Service
(2) No member of the Civil Service may obey an order that is manifestly illegal – in this case organising the workshop by the DSI was inexcusably illegal
(3) No member of the Civil Service may in the exercise of their functions –
(a) act in a partisan manner,
(b) further the interests of any particular party or cause – mobilising school heads to campaign for Zanu PF is asking them to break the law.
(c) prejudice the lawful interests of any political party or cause- opposition parties in Zimbabwe are offended n disadvantaged by this move
(d) violate the fundamental rights or freedoms of any person – the rights of the school heads who were commandeered to attend this illegal workshop were grossly violated. They must fully enjoy (58) freedom of assembly and association, (60) freedom of conscience, (61) freedom of expression and such other rights as guaranteed by the Constitution.

It is these unconstitutional acts that have taken Zimbabwe where it is today. Lawlessness by the ruling party and its institutions especially the security sector have cemented our status as a pariah state. I wish to advise Mr ED Mnangagwa that he studies our own Zimbabwe constitution, implement its provisions to the letter before he boards planes to foreign lands asking for the normalisation of relations with foreigners. Charity begins at home ED woye. Ngatiyanane muZimbabwe medu first by sticking to our own laws. Allow your own citizens to enjoy their guaranteed fundamental human rights in their own country. If Zimbabweans cannot be free here in Zimbabwe, where do we expect them to enjoy their freedom? In foreign lands? This is wrong.

I call upon fellow Zimbabweans to continue to expose this regime for what it truly is; a lawless one. They are going too far in their attempt to forceably stay in power. Let’s remain steadfast in our quest for genuine and true freedom.