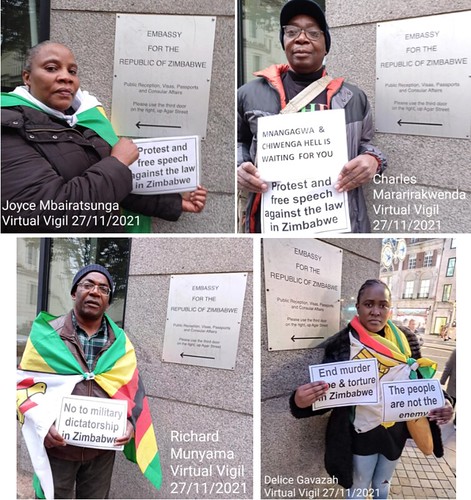 The British government says Zimbabwe remains a major source of concern because of human rights violations such as clamping down on protests against the government and the arrest of critics and journalists (see: https://www.theeastafrican.co.ke/tea/rest-of-africa/uk-raises-alarm-over-human-rights-violations-in-zimbabwe-3629650).

The Foreign Office statement came as the House of Lords discussed what was described as the deteriorating political and socio-economic crisis in Zimbabwe. Members called for intervention by SADC, particularly South Africa.

Parliamentarians insisted that, before being able to return to the Commonwealth, Zimbabwe should meet certain conditions, including holding free and fair elections. President Mnangagwa is keen to rejoin the organisation from which Mugabe walked out.

A minister of the British Foreign and Commonwealth Office, Lord Ahmad said: ‘Within Zimbabwe, we must see rights restored, the constitution respected and human rights – w hich includes the rights of other political parties to participate fully in the democratic process – guaranteed.’ He added: ‘We regularly urge the Zimbabwean government to live up to their own Constitution by ensuring that the opposition, civil society and journalists are allowed to operate without harassment and that due legal process is respected.’

Ahmad also said the British Prime Minister Boris Johnson had not had a ‘one-on-one’ meeting with Mnangagwa at the recent Glasgow climate change conference (see: http://www.newsdzezimbabwe.co.uk/2021/11/uk-presses-govt-over-free-and-fair-polls.html and a video of the House of Lords debate: https://www.youtube.com/watch?v=9ARbI5RdqwA).

The US has also dismissed claims that Mnangagwa had discussed the removal of sanctions at a meeting with President Biden at the conference. A US spokesperson said they had only met briefly at a reception.

The Zimbabwe Independent also reports that the South African government is very dismissive of Mnangagwa. A recent online discussion organised by the journalist Hopewell Chin’ono heard South African Head of Public Diplomacy Clayson Monyela say that the South African government had no kind words for their Zimbabwean counterparts. ‘Take my word for it, some of the language that is used when there are meetings behind closed doors, you would be shocked.’ (See: https://www.theindependent.co.zw/2021/11/26/mnangagwa-suffers-yet-another-diplomatic-blow/.)

The Vigil was pleased to see that medical experts in the UK have been full of praise for their South African counterparts for the speed of their reporting of the new Covid variant, now named the Omicron variant. international flights to South Africa and Zimbabwe and other southern African countries have been halted but one leading British scientist says a new vaccine can quickly be produced to counter the variant (see: http://www.zimvigil.co.uk/vigil-news/campaign-news/1183-how-long-before-a-vaccine-protects-us-against-the-omicron-covid-variant-).