MUREHWA, Zimbabwe (AP) — Inside a sparsely furnished two-room home in rural Zimbabwe, a 3-month-old baby cries. His mother, Virginia Mavhunga, spends her days making trips to the well with a bucket on her head, selling fruits and vegetables at the roadside, cooking, cleaning, washing clothes — she has too much on her hands to offer her child, Tawananyasha, much comfort. 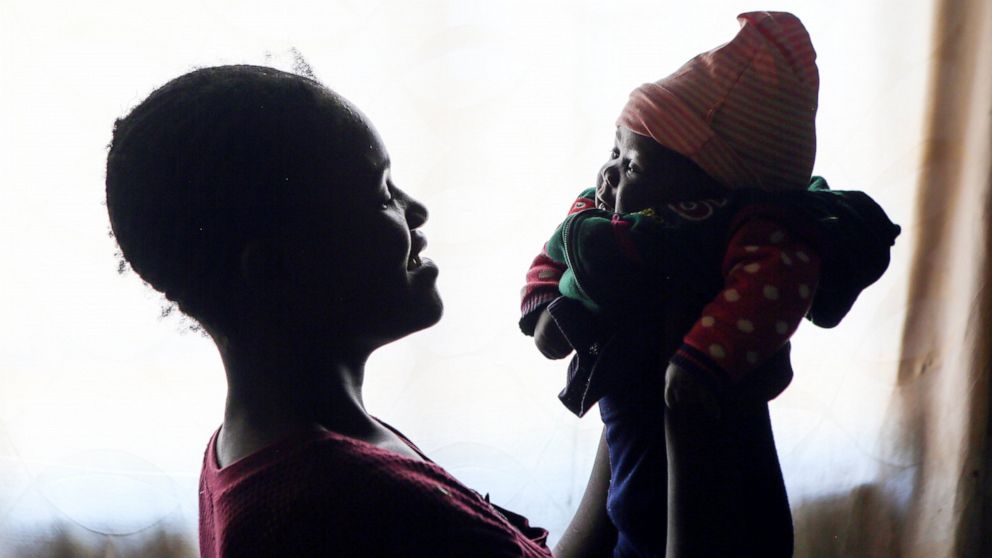 Virginia Mavhunga, a 13-year-old teenage mother, plays with her child at her rural home in Murehwa, 80 kilometres (50 miles) northeast of Zimbabwe’s capital Harare, Friday, Dec. 10, 2021. Virginia dropped out of school after falling pregnant and became the subject of gossip and consternation in a community yet to adjust to the sight of a pregnant girl in school uniform. (AP Photo/Tsvangirayi Mukwazhi)

“That’s my life now, every day,” the new mother said.

Between the chores of her strict routine, Virginia prepares her four younger siblings for school and helps them with homework when they return. It’s these tasks that hit Virginia the hardest — because, at age 13, she, too, would rather be in school.

Virginia is part of a steep increase in pregnancies among girls and teenagers reported in Zimbabwe and other southern African countries during the pandemic. Zimbabwe has long struggled with such pregnancies and child marriages. Before COVID-19 hit, one of every three girls in the country was wed before age 18, many with unplanned pregnancies, because of lax enforcement of laws, widespread poverty, and cultural and religious practices.

This story is part of a yearlong series on how the pandemic is impacting women in Africa, most acutely in the least developed countries. The Associated Press series is funded by the European Journalism Centre’s European Development Journalism Grants program, which is supported by the Bill & Melinda Gates Foundation. The AP is responsible for all content.

The spread of coronavirus intensified the situation. The country of 15 million people imposed a strict lockdown in March 2020, closing schools for six months and reopening them only intermittently. Girls in particular were left idle and shut out from access to contraceptives and clinics; the troubles of impoverished families worsened.

Many girls became victims of sexual abuse or looked to marriage and pregnancy as a way out of poverty, advocates and officials said. Before the pandemic, many such girls were “relegated as a lost cause,” said Taungana Ndoro, an education official in Zimbabwe.

But faced with the rising numbers, the government in August 2020 changed a law that had long banned pregnant students from schools. Activists and authorities hailed the move as a significant step in the developing nation, but so far the new policy has largely failed. Most girls haven’t returned to school, with authorities and families citing economic hardship, deep-seated cultural norms, and stigma and bullying in class.

The AP generally doesn’t name victims of sexual abuse without consent. For this story, the girls and their families have agreed to be identified and have their names published, in keeping with their wishes to have their stories told.

Virginia tried to return to school while pregnant under the policy change. Officials encouraged her and her parents. But she was the butt of jokes and the subject of gossip in a community not accustomed to seeing a pregnant girl in a school uniform.

“People would laugh at me. Some would point and ask in ridicule; ‘What’s up with that belly?’” she said, looking at a photo of herself in the purple uniform. She has since sold it for $2 to pay for the baby’s clothing and other needs.

Virginia said she had hoped the older man who impregnated her would marry her. Despite initial promises, he ultimately denied paternity, she said. She and her family didn’t follow through on a statutory rape case with police, despite Zimbabwean law putting the age of consent at 16.

Under the law, people convicted of sexual intercourse or “an indecent act” with anyone younger than 16 can get a fine or up to 10 years in jail. But most incidents never get that far. Families and officials have long tried “to sweep the cases under the carpet or … force marriages on the minor,” police spokesman Paul Nyathi said.

Families often try to negotiate with the offender, pressuring him to marry the girl and give her family cattle or money, Nyathi said. Then they agree to not report the case to police — ultimately “assisting in the abuse of the girl,” he said.

Police said they couldn’t provide data related to prosecuted or reported cases. Nyathi said a tally would be ready by the end of January — but any figures are likely an undercount.

Zimbabwe does have figures on pregnancies in girls who drop out of school — and while they show an alarming increase, officials say they, too, likely reflect an undercount, as many girls simply leave without giving a reason.

In 2018, about 3,000 girls dropped out of school nationwide because of pregnancies. In 2019, that number remained relatively steady. In 2020, the number rose: 4,770 pregnant students left school.

And in 2021, it skyrocketed: About 5,000 students got pregnant in just the first two months of the year, according to women’s affairs minister Sithembiso Nyoni.

Across Africa, Zimbabwe isn’t alone: During the pandemic, Botswana, Namibia, Lesotho, Malawi, Madagascar, South Africa and Zambia “all recorded a steep rise in cases of sexual and gender-based violence, which has contributed to a reported increase in pregnancies among young and adolescent girls,” according to an Amnesty International report. The continent has one of the highest pregnancy rates among adolescents in the world, according to the United Nations, and Zimbabwe and a handful of other nations now have laws or policies to protect girls’ education while pregnant.

Zimbabwe’s change in law gave community workers an opportunity to encourage girls to return to school. Through a group that promotes girls’ rights, Tsitsi Chitongo held community meetings and knocked on doors to speak with families in remote, rural areas.

But the lack of enthusiasm from families jolted her. By November, her group had persuaded only one child to return to school in Murehwa — a poor rural township of mostly small farmers dealing with the fallout of drought, about 50 miles (80 kilometers) from the capital, Harare.

That girl lasted only a week in school, Chitongo said. She sees resistance from parents, community leaders and teachers — in addition to the girls themselves.

“Most parents are still steeped in the old way of doing things,” she said. “They prefer to have the child married, even if she is under the age of 18. They tell us, ‘I am already struggling to take care of my family; I can’t afford an extra mouth when the girl gives birth.’ So children are being chased away from home.”

Some schools also discourage girls from returning, despite the recent change, Chitongo said.

“Sometimes headmasters tell us that they don’t quite understand how the policy works and they refuse to admit the children,” she said. “They complain that pregnant girls are not focused. Some simply tell us that the school is full.”

Often girls are unaware they have a right to remain in school. They’re then forced to find work, frequently as housemaids, to support their children, Chitongo said. Or they go to the men who impregnated them.

For 16-year-old Tanaka Rwizi, the backyard of a clinic run by Doctors Without Borders in the poverty-stricken Mbare township has taken the place of school. There, a club for teenage mothers provides crash courses on life skills and ways they can make a living, such as giving manicures and making soap for sale.

Tanaka dropped out of her school after becoming pregnant early last year. She lives with her unemployed uncle in a single room divided by a curtain. Every Thursday, she gathers with other girls for the clinic’s program. It began in 2019 for a handful of participants, but demand grew during the pandemic, said Grace Mavhezha, of Doctors Without Borders. More than 300 girls have come to the program since COVID-19 hit.

Most of the girls opt for the program over formal school because they need a skill that can help them “quickly make some money,” Mavhezha said. “There is a lot of poverty; they need to fend for their children.”

Many also set their sights on marriage to survive. Tanaka said the 20-year old man who impregnated her promised to marry her as soon as she turns 18 — the youngest allowed in Zimbabwean law.

“I can’t wait that long,” Tanaka said. She planned to go to him immediately after giving birth.

“Girls are banned from taking contraceptives due to traditional myths that our parents have, that girls cannot have sex until they are in their 20s or married,” said Yvette Kanenungo, a 20-year old clinic volunteer. “The truth is that the girls are already having sex, but cannot freely take contraceptives because of the no-sex-before-marriage decree at home.”

For Virginia, the travel restrictions meant she was stuck at home in Murehwa after visiting her parents from her city school last year. She enrolled instead at a local school, but spent little time there because of intermittent closures.

At first, Virginia’s parents — who try to support the family by sorting market items for sale and getting their drought-damaged land ready for growing again — wanted to pursue a statutory rape case against the older man who impregnated her. But they gave up when he was released on bail and said they now hope he’ll take care of the baby.

Virginia’s father ignored advice from neighbors to make his daughter leave home. Her mother wanted to protect her, and that included keeping her out of school and away from harassment.

Virginia vows to return to school someday, though. She misses her classes, her peers. She wants to graduate and be accepted to a university, so she can get a degree and repay her parents’ faith in her by building them a bigger home.

“I would rather return to school than get married,” she said. “I am not afraid of going back to school once my child is older. They may laugh at me now, but I am dedicating all my spare time and weekends to reading and catching up.

“This is not the end of the road, just a forced break.”

This story is part of a yearlong series on how the pandemic is impacting women in Africa, most acutely in the least developed countries. AP’s series is funded by the European Journalism Centre’s European Development Journalism Grants program, which is supported by the Bill & Melinda Gates Foundation. The AP is responsible for all content.

See the full series on how the pandemic is affecting women in Africa: https://apnews.com/hub/women-the-eyes-of-africa